Hakham Bashi (Ottoman Turkish: حاخامباشی‎, Turkish: Hahambaşı) is the Turkish name for the Chief Rabbi of the nation's Jewish community. In the time of the Ottoman Empire it was also used for the chief rabbi of a particular region of the empire, such as Syria or Iraq, though the Hakham Bashi of Constantinople was considered overall head of the Jews of the Empire. 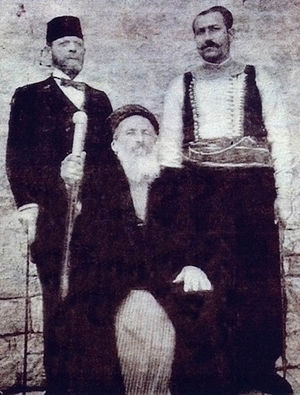 The institution of the Hakham Bashi was established by the Ottoman Sultan Mehmet II, as part of his policy of governing his exceedingly diverse subjects according to their own laws and authorities wherever possible. Religion was considered as primordial aspect of a communities 'national' identity, so the term Ethnarch has been applied to such religious leaders, especially the (Greek Orthodox) Ecumenical Patriarch of Constantinople (i.e. in the Sultan's imperial capital, renamed Istanbul in 1930 but replaced by Ankara as republican capital in 1923). As Islam was the official religion of both court and state, the Chief Mufti in Istanbul had a much higher status, even of cabinet rank.

Because of the size and nature of the Ottoman state, containing a far greater part of the diaspora then any other, the position of Hakham Bashi has been compared to that of the Jewish Exilarch.

In the Ottoman Empire, and as such, the Hakham Bashi was the closest thing to an overall Exilarchal authority among Jewry everywhere in the Middle East in early modern times. They held broad powers to legislate, judge and enforce the laws among the Jews in the Ottoman Empire and often sat on the Sultan's divan.

The office also maintained considerable influence outside the Ottoman Empire, especially after the forced migration of numerous Jewish communities and individuals out of Spain (after the fall of Granada in 1492) and Italy.

The Chief Rabbi of the modern, secular Republic of Turkey is still known as Hahambaşı.

List of individuals holding the titles of Chief Rabbi in the Ottoman Empire, the Turkish Republic, Ottoman and Mandatory Palestine, and Israel

Chief Rabbis of the Galilee