Harold "Prince Hal" Newhouser (May 20, 1921 – November 10, 1998) was an American former professional baseball player. In Major League Baseball (MLB), he pitched 17 seasons on the Detroit Tigers and Cleveland Indians, from 1939 through 1955. Newhouser was an All-Star for six seasons,[lower-alpha 1] and was considered to be the most dominating pitcher of the World War II era of baseball, winning a pitcher's triple crown for the Tigers in 1945.

After his retirement from baseball, Newhouser was away from baseball for 20 years while he served as a bank vice president. He later worked as a scout for several MLB teams. While scouting for the Houston Astros, he was angered when the team did not listen to his recommendation to draft Derek Jeter and instead picked Phil Nevin. He quit shortly after. Newhouser was inducted into the National Baseball Hall of Fame in 1992. He died several years later in a Michigan hospital.

Newhouser was a schoolboy star at Wilbur Wright High School in his hometown of Detroit, Michigan. Before he was approached by professional baseball teams, he had been saving money to attend a trade school by working several jobs. The young Newhouser sold newspapers, collected pop bottles and worked in a bowling alley before signing on in professional baseball.[1]

He was signed by the Detroit Tigers in 1939 at the age of 18. A Tigers scout offered a $500 signing bonus to Newhouser, who found the sum of money to be unimaginable. Ten minutes after he signed, someone arrived from the Cleveland Indians; that employee had been prepared to offer $15,000 to his parents in addition to a $4,000 car.[1]

Newhouser made his debut for Detroit on September 29, 1939. In 1940, he earned a spot on the Tigers out of spring training. In his first two full big-league seasons, the young left-hander experienced control problems, walking more batters than he struck out while posting win-loss records of 9–9 and 9–11. He improved in 1942 and 1943, posting excellent earned run averages (ERAs), but he still lost more than he won on a team with a weak offense.

As World War II got under way, the Tigers moved up in the standings because several of their top players, including Newhouser, were classified as 4-F (ineligible to be drafted). Newhouser was 4-F due to a leaky heart valve; he attempted to join the service anyway but was turned down several times.[2]

He blossomed in 1944, becoming a dominant pitcher in wartime baseball. That season, Newhouser rang up a 29–9 record, leading the league in wins and strikeouts (187). His 2.22 ERA was second in the league, as were his 25 complete games and six shutouts. The Tigers jumped into contention, finishing second in the American League, with Newhouser named MVP. Newhouser won the first Sporting News Pitcher of the Year Award in 1944.[3]

By the 1945 season, NewHouser had been selected for three consecutive AL All-Star teams. The 1945 All-Star Game was cancelled on April 24 because of travel restrictions and seven out of eight scheduled interleague games were played in place of the All-Star Game on July 9 and 10 to support the American Red Cross and War Relief fund.[4][5] Newhouser became the first pitcher to repeat as MVP that season and helped the team win the World Series. He won the pitcher's Triple Crown, leading the AL in wins (25, against nine losses), ERA (1.81) and strikeouts (212). He also led the league in innings pitched, games started, complete games and shutouts. Newhouser pitched four innings of relief on the season's final day as Detroit rallied for the pennant. Newhouser won the second The Sporting News Pitcher of the Year Award.[3] He became the youngest player (24) to win the award in two consecutive years. In that year's World Series, Newhouser won two games, including a complete-game victory in the deciding seventh game.[6]

After being released by the Tigers following the 1953 season, Newhouser signed on with the Cleveland Indians and was their top long reliever in 1954, when Cleveland won 111 games and the pennant. In his final big-league hurrah, he posted a 7–2 mark with a 2.54 ERA, and got to pitch in his second World Series. He ended his career with a record of 207–150 and a 3.06 ERA. He is the only pitcher ever to win consecutive MVP awards. 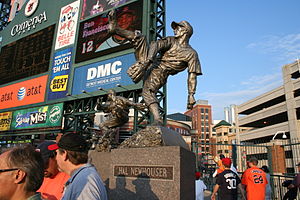 A statue of Newhouser in Comerica Park.

After retirement, Newhouser worked as a scout for the Houston Astros, Baltimore Orioles, Cleveland Indians, and the Detroit Tigers. While with the Astros, Newhouser was credited with discovering Derek Jeter, whom the Astros passed over for Phil Nevin.[7] He quit his job with the Astros after they ignored his advice to draft Jeter,[8] though he had planned to retire after that season in any case.[9]

As a scout with the Orioles, Newhouser discovered Milt Pappas. Pappas was a Detroit high schooler named who went on to win 209 games in his career — two more than Newhouser did. He also signed Dean Chance to the Orioles. Chance later won a Cy Young Award after leaving the team.[10]

In 1992, he was elected to the National Baseball Hall of Fame. His induction class included Tom Seaver, Rollie Fingers and Bill McGowan. The ceremony was attended by a record-setting crowd of 20,000 people.[11] The Tigers retired Newhouser's number 16 in 1997. He died on November 10, 1998 in a hospital in Southfield, Michigan. He had been ill with emphysema and heart problems.[1]

During his playing days, Newhouser's teammates nicknamed him "Prince Hal" because of the way he carried himself. His wife, Beryl Newhouser, said that she could not ever remember seeing him with his shirttail untucked. Newhouser left baseball for 20 years after his retirement, spending time as a bank vice president in Pontiac, Michigan.[12]