Halifax (previously known as Halifax Building Society) is a banking chain in the United Kingdom and a division of Bank of Scotland, itself a wholly owned subsidiary of Lloyds Banking Group. It is the UK's largest provider of residential mortgages and savings accounts.

It is named after the town of Halifax, West Yorkshire where it was founded as a building society in 1853. By 1913 It had developed into the UK's largest building society and continued to grow and prosper and maintained this position within the UK until 1997 when it demutualised.

In 1997 it became Halifax plc, a public limited company which was a constituent of the FTSE 100 Index. In 2001 Halifax plc merged with The Governor and Company of the Bank of Scotland, forming HBOS. In 2006, the HBOS Group Reorganisation Act 2006 legally transferred the assets and liabilities of the Halifax chain to Bank of Scotland which became a standard plc, with Halifax becoming a division of Bank of Scotland. A takeover of HBOS by Lloyds TSB was approved by the Court of Session on 12 January 2009, and on 19 January 2009 Bank of Scotland, including Halifax, formally became part of Lloyds Banking Group.

The Halifax was formed in 1853 as the Halifax Permanent Benefit Building and Investment Society. The idea was thought up in a meeting room situated above the Old Cock Inn close to the original Building Society building.[1] Like all early building societies, the purpose of the society was for the mutual benefit of local working people. Investors with surplus cash would invest in the society to receive interest, and borrowers could access loans to fund the purchase of a house.

Unlike many British building societies which grew large by acquisitions and mergers, the Society chose an organic form of growth, and proceeded to open branches throughout the UK. By 1913, it was the largest building society in the UK.[1] The first office in London opened in 1924;[1] and the first offices in Scotland in 1928.[1] 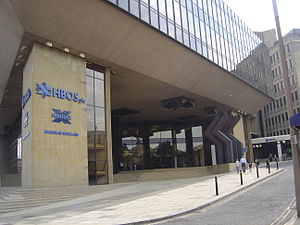 The former headquarters of the Halifax in Trinity Road, Halifax, West Yorkshire.

In 1928, it merged with Halifax Equitable Building Society,[1] then the second largest building society and was renamed Halifax Building Society. The society was now five times larger than its nearest rival, with assets of £47 million.[1]

A new head office was built at Trinity Road, Halifax in 1973.[1] The distinctive diamond-shaped building was used on marketing material during the 1980s and '90s. Underneath the building is a specially constructed deedstore which is used to store property deeds for a one off charge of £10. It is computerised and filled with foam to prevent fire. Its importance has diminished in recent years because property data is now kept on a central database kept by HM Land Registry. 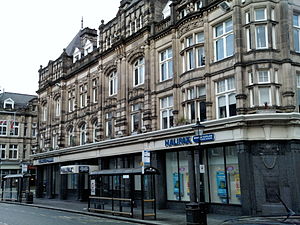 The main branch of Halifax, in Halifax

The society continued to grow in size throughout the 20th century, remaining the UK's largest building society. The deregulation of the financial services industry in the 1980s saw the passing of the Building Societies Act 1986 which allowed societies greater financial freedoms, and diversification into other markets. Accordingly, the Halifax acquired an estate agent to complement its mortgage business. It also expanded by offering current accounts and credit cards, traditionally services offered by commercial banks.

The 1986 Act also allowed building societies to demutualise and become public limited companies instead of mutually owned organisations, owned by the customers who borrowed and saved with the society. Although the Abbey National demutualised in 1989, the process was not repeated until the late 1990s, when most of the large societies announced demutalisation plans. In 1995, the Halifax announced it was to merge with the Leeds Permanent Building Society and convert to a plc. The Halifax floated on the London Stock Exchange on 2 June 1997.[1] Over 7.5 million customers of the Society became shareholders of the new bank, the largest extension of shareholders in UK history.[2]

File:HalifaxBank.jpg
A high-street branch of the Halifax in Peterborough

As Halifax plc, the new bank was the fifth largest in the UK in terms of market capitalisation. Further expansion took place with the 1996 acquisition of Clerical Medical Fund Managers, a UK life insurance company. In 1999, the Halifax acquired the Birmingham Midshires Building Society[1] and ComparetheLoan. In 2000, Halifax established Intelligent Finance, a telephone and internet based bank.

In 2006, the HBOS Group Reorganisation Act 2006 was passed. The aim of the Act was to simplify the corporate structure of HBOS. The Act was fully implemented on 17 September 2007 and the assets and liabilities of Halifax plc transferred to Bank of Scotland plc. The Halifax brand name was to be retained as a trading name, but it no longer exists as a legal entity.[5] 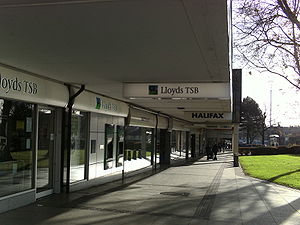 HBOS was acquired by the Lloyds Banking Group in January 2009 amid falling share price and speculation as to its future. Bank of Scotland plc (including its brands such as Halifax) became a wholly owned subsidiary of the group.

In February 2009, Halifax made significant changes to its current accounts. From then, all new standard current accounts had zero credit and debit interest, along with no paid and unpaid item charges (which were previously up to £35, Halifax's basic bank accounts do still have unpaid-item charges at much lower than £35 each). Instead, all overdraft-eligible Halifax 'Standard current account' customers pay £1 per day for being overdrawn by up to £1999.99 within an arranged overdraft, and £2 per day for up to £2999.99 and £3 per day for over £3000.00. For unarranged overdrafts the fee is £5 per day. Credit interest has been replaced by a £5 net payment every month if customers abide by the terms of the 'Reward current account'. These changes were implemented to all current account customers (except student accounts) from December 2009. These changes caused a great deal of media attention at the time of the change,[6] with Martin Lewis and consumer magazine Which? urging Halifax customers to keep their accounts in credit wherever possible, or consider moving their accounts to an alternative bank, in response to the new charges.[7][8]

On 16 October 2009, Halifax Estate Agency was sold to LSL Properties for a fee of £1. The branches were renamed as one of LSL's existing brands, Reeds Rains.[9]

As of December 2010, Halifax has become a clearing bank, meaning that it can now accept Bank Giro Credits. This had led to major changes in counter services in Halifax branches and used to require paying-in and withdrawal slips to be completed to carry out transactions. The implementation of Bank Giro Credits was phased by branch and took around six months to complete. Halifax has also introduced Chip and PIN machines at its branches' counters as part of these modernisation and security enhancement changes.

On Boxing Day 2000, Halifax started a successful marketing campaign, which was continued after the creations of HBOS.