Halldór Laxness was born in 1902 in Reykjavík, with his family moving to the Laxnes farm in nearby Mosfellssveit parish when he was three. Laxness started to read books and write stories at an early age. He attended the technical school in Reykjavík from 1915 to 1916 and had an article published in the newspaper Morgunblaðið in 1916.[4] By the time his first novel was published (Barn náttúrunnar, 1919), Laxness had already begun his travels on the European continent.[5]

In 1922, Laxness joined the Abbaye Saint-Maurice-et-Saint-Maur in Clervaux, Luxembourg where the monks followed the rules of Saint Benedict of Nursia. In 1923 Laxness was baptized and confirmed in the Catholic Church, adopting the surname Laxness (after the homestead on which he was raised) and adding the name Kiljan (the Icelandic name of Irish martyr Saint Killian). While staying at the abbey Laxness practiced self-study, read books, and studied French, Latin, theology and philosophy. He became a member of a group which prayed for reversion of the Nordic countries back to Catholicism. Laxness wrote of his experiences in the books Undir Helgahnúk (1924) and, more importantly, in Vefarinn mikli frá Kasmír (The Great Weaver from Kashmir). That novel, published in 1927, was hailed by noted Icelandic critic Kristján Albertsson:

"Finally, finally, a grand novel which towers like a cliff above the flatland of contemporary Icelandic poetry and fiction! Iceland has gained a new literary giant - it is our duty to celebrate the fact with joy!"[6]

Laxness's religious period did not last long; during a visit to America he became attracted to socialism.[7] Between 1927 and 1929 Laxness lived in the United States, giving lectures on Iceland and attempting to write screenplays for Hollywood films.[8] He was "enamored" of Charlie Chaplin's film City Lights.[9] Laxness said that he "did not become a socialist in America from studying manuals of socialism but from watching the starving unemployed in the parks."[10] "… Laxness joined the socialist bandwagon… with a book Alþýðubókin (The Book of the People, 1929) of brilliant burlesque and satirical essays… "[11] "Beside the fundamental idea of socialism, the strong sense of Icelandic individuality is also the sustaining element in Alþýðubókin. The two elements are entwined together in characteristic fashion and in their very union give the work its individual character."[12]

In 1929 Laxness published an article critical of America in Heimskringla, a Canadian newspaper. This resulted in charges being filed against him, his detention and the forfeiture of his passport. With the aid of Upton Sinclair and the ACLU, the charges were dropped. Laxness returned to Iceland later that year.[13]

By the 1930s Laxness "had become the apostle of the younger generation" and was "viciously" attacking the Christian spiritualism of Einar Hjörleifsson Kvaran, an influential writer who had been considered for the Nobel Prize.[14]

"… with Salka Valka (1931–32) began the great series of sociological novels, often coloured with socialist ideas, continuing almost without a break for nearly twenty years. This was probably the most brilliant period of his career, and it is the one which produced those of his works that have become most famous. But Laxness never attached himself permanently to a particular dogma."[15]

In addition to the two parts of Salka Valka, Laxness published Fótatak manna (Steps of Men) in 1933, a collection of short stories, as well as other essays, notably Dagleið á fjöllum (A Day's Journey in the Mountains) in 1937.[16]

Laxness's next novel was Sjálfstætt fólk (Independent People, 1934, 1935) which has been described as "… one of the best books of the twentieth century."[17]

When Salka Valka was published in English in 1936 a reviewer from the Evening Standard stated: "No beauty is allowed to exist as ornamentation in its own right in these pages; but the work is replete from cover to cover with the beauty of its perfection."[18]

This was followed by the four-part novel Heimsljós (World Light, 1937, 1938, 1939, 1940), which was "… consistently regarded by many critics as his most important work."[19] It was loosely based on the life of Magnús Hjaltason Magnusson, a minor Icelandic poet of the late 19th century.[20]

Laxness also traveled to the Soviet Union and wrote approvingly of the Soviet system and culture.[21] He was present at the "Trial of the Twenty-one" and wrote about it in detail in his book Gerska æfintýrið (The Russian Adventure).

In the late 1930s Laxness developed a unique spelling system that was closer to pronunciation; this characteristic is lost in translation.[22]

In 1941 Laxness translated Ernest Hemingway's A Farewell to Arms into Icelandic, which caused controversy because of his use of neologisms.[23]

Between 1943 and 1946 Laxness' "epic"[24] three-part work of historical fiction, Íslandsklukkan (Iceland's Bell), was published. It has been described as a novel of broad "… geographical and political scope… expressly concerned with national identity and the role literature plays in forming it… a tale of colonial exploitation and the obdurate will of a suffering people."[25] "Halldór Kiljan Laxness’s three-volume Íslandsklukkan … is probably the most significant (Icelandic) novel of the 1940s."[26]

In 1946 Independent People was released as a Book of the Month Club selection in the United States, selling over 450,000 copies.[27]

By 1948 he had a house built in the rural countryside outside of Mosfellsbær. He then began a new family with his second wife, Auður Sveinsdóttir, who, in addition to her domestic duties, also assumed the roles of personal secretary and business manager.

In response to the establishment of a permanent US military base in Keflavík, he wrote the satire Atómstöðin (The Atom Station), an action which may have contributed to his being blacklisted in the United States.[28]

"The demoralization of the occupation period is described... nowhere as dramatically as in Halldór Kiljan Laxness' Atómstöðin (1948)... [where he portrays] postwar society in Reykjavík, completely torn from its moorings by the avalanche of foreign gold."[29]

Due to its examination of modern Reykjavík, Atómstöðin caused many critics and readers to consider it as the exemplary "Reykjavík Novel."[30] 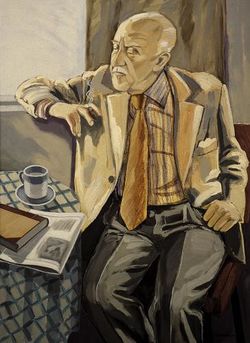 An adaptation of his novel Salka Valka was directed by Arne Mattsson (and filmed by Sven Nykvist) in 1954.[32]

In 1955 Laxness was awarded the Nobel Prize in Literature, "… for his vivid epic power, which has renewed the great narrative art of Iceland".[33]

"His chief literary works belong to the genre… [of] narrative prose fiction. In the history of our literature Laxness is mentioned beside Snorri Sturluson, the author of "Njals saga", and his place in world literature is among writers such as Cervantes, Zola, Tolstoy, and Hamsun… He is the most prolific and skillful essayist in Icelandic literature both old and new…"[15]

In the presentation address for the Nobel prize Elias Wessén stated:

"He is an excellent painter of Icelandic scenery and settings. Yet this is not what he has conceived of as his chief mission. 'Compassion is the source of the highest poetry. Compassion with Asta Sollilja on earth,' he says in one of his best books… And a social passion underlies everything Halldór Laxness has written. His personal championship of contemporary social and political questions is always very strong, sometimes so strong that it threatens to hamper the artistic side of his work. His safeguard then is the astringent humour which enables him to see even people he dislikes in a redeeming light, and which also permits him to gaze far down into the labyrinths of the human soul."[34]

In his acceptance speech for the Nobel prize Laxness spoke of:

"… the moral principles she [his grandmother] instilled in me: never to harm a living creature; throughout my life, to place the poor, the humble, the meek of this world above all others; never to forget those who were slighted or neglected or who had suffered injustice, because it was they who, above all others, deserved our love and respect…"[35]

Laxness grew increasingly disenchanted with the Soviets after their military action in Hungary in 1956.[36]

Major works in this decade were Gerpla, (The Happy Warriors/Wayward Heroes, 1952), Brekkukotsannáll, (The Fish Can Sing, 1957), and Paradísarheimt, (Paradise Reclaimed, 1960).

In the 1960s Laxness was very active in the Icelandic theatre, writing and producing plays, the most successful being The Pigeon Banquet (Dúfnaveislan, 1966.)[38]

In 1968 Laxness published the "visionary novel"[39] Kristnihald undir Jökli (Under the Glacier / Christianity at the Glacier). In the 1970s Laxness published what he called "essay novels": Innansveitarkronika (A Parish Chronicle, 1970) and Guðsgjafaþula (A Narration of God's Gifts, 1972); neither has been translated into English.[40]

Laxness was awarded the Sonning Prize in 1969.

In 1970 Laxness published an influential ecological essay Hernaðurinn gegn landinu (The War Against the Land).[41]

He continued to write essays and memoirs throughout the 1970s and into the 1980s. As he grew older he began to suffer from Alzheimer's disease and eventually moved into a nursing home where he died at the age of 95.

Gljúfrasteinn (Laxness’ house and grounds as well as his personal effects), is now a museum operated by the Icelandic government.[43]

Guðný Halldórsdóttir is a filmmaker whose first work was the 1989 adaptation of Kristnihald undir jōkli (Under the Glacier).[44] In 1999 her adaptation of the Laxness story Úngfrúin góða og Húsið (The Honour of the House) was submitted for Academy Award consideration for best foreign film.[45]

In the 21st century interest in Laxness increased in English-speaking countries following the re-publishing of several of his novels and the first English language publications of Iceland's Bell (2003) and The Great Weaver from Kashmir (2008).[46] In 2016 a new translation of Gerpla was published with the English title Wayward Heroes.[47]

A biography of Laxness by Halldór Guðmundsson, The Islander: a Biography of Halldór Laxness, won the Icelandic literary prize for best work of non-fiction in 2004.

Numerous dramatic adaptations of Laxness’ work have been staged in Iceland. In 2005, the Icelandic National Theatre premiered a play by Ólafur Haukur Símonarson, titled Halldór í Hollywood (Halldór in Hollywood) about the author's time spent in the United States in the 1920s.