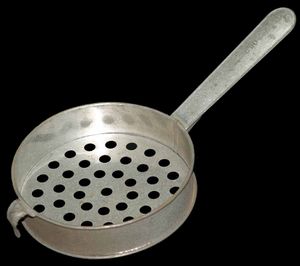 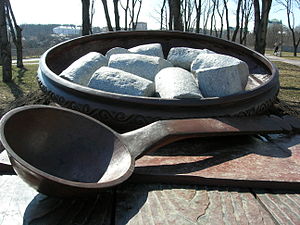 Halušky (IPA: [ɦaluʃkɪ] in Czech and Slovak, singular: haluška; Hungarian: galuska or nokedli; Romanian: găluşcă; Serbian: galuška; Ukrainian: галушка; Lithuanian: virtinukai) are a traditional variety of thick, soft noodles or dumplings cooked in the Central and Eastern European cuisines (Slovakia, Czech Republic, Poland, Serbia, Ukraine, Romania and Hungary). Halušky can refer to the dumplings themselves, or to the complete dish.

The dumplings can be made from dough spread in a thin layer on a wooden cutting board, then cut and scraped off in small pieces which are dropped into boiling water. They can also be made with a special perforated halušky strainer forming small (1/2 X 2–3 cm) irregularly-shaped lumps which drop directly into boiling water as a thinner batter-like dough is pressed through the openings of the strainer.

Although recipes vary from region to region, in general flour is mixed with water to form a batter. Finely grated potatoes can be added to the batter. Eggs may be added, but Slovak bryndzové halušky do not contain them. Flour and mashed potatoes are enough to form a batter. After cooking, they are mixed with various ingredients, such as cheese, meat, butter, cabbage, onions, or combinations of these.

Bryndzové halušky is a traditional Slovak dish also found in Moravia in the eastern part of the Czech Republic. Strapačky is a similar Slovak dish, where stewed sauerkraut is used instead of bryndza. In Hungary, galuska are often eaten with meat stews, such as goulash or pörkölt.

In the United States, most adapted halusky recipes call for egg noodles rather than potato dumplings. Some American cooks include loose, cut, and fried green cabbage (a convergence with strapačky, compelled by simplicity, difficulty in finding bryndza or acceptable substitutes, and access to affordable cabbage in areas with prominent existing Slavic and Germanic immigration).