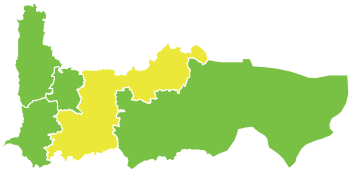 Hama District (Arabic: منطقة حماة‎‎ Ḥamā) is a district (mantiqah) administratively belonging to Hama Governorate, Syria. At the time of the 2004 Census, it had a population of 644,445.[1] Its administrative centre is the city of Hama.

The district of Hama is divided into four sub-districts or Nāḥiyas (population according to 2004 official census):