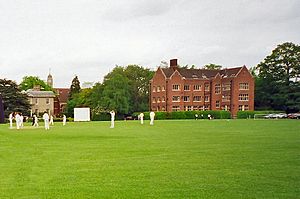 After attending Manama secondary school in Bahrain, Hamad was sent to England to attend Applegarth College in Godalming, Surrey before taking a place at The Leys School in Cambridge. Hamad then underwent military training, first with the British Army at Mons Officer Cadet School at Aldershot in Hampshire, graduating in September 1968.[2] Four years later, in June 1972, Hamad attended the United States Army Command and General Staff College at Fort Leavenworth in Kansas, graduating the following June with a degree in leadership.[4][5]

Hamad was designated as heir apparent by his father on 27 June 1964. In 1968, he was appointed as the chairman of the irrigation council and Manama municipal council. He was commissioned into the Bahrain National Guard on 16 February 1968 and appointed as its commander the same year, remaining in that post until 1969 when he was appointed as the commander-in-chief of the Bahrain Defence Force. In 1970, Hamad became the head of the Bahraini department of defence and the vice-chairman of the administrative council, remaining in both offices until 1971. From 1971 to 1988 he was the minister of state for defence.[5]

In October 1977, Hamad started learning to fly helicopters, successfully completing the training in January 1978. He then worked to establish the Bahrain Amiri Air Force,[4] which came into being in 1987 when the defence force air wing was reconstituted as an air force. 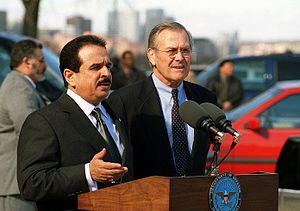 On the death of his father Isa bin Salman Al Khalifa, Hamad became Emir of Bahrain on 6 March 1999.[1] As Emir, Hamad brought several political reforms to Bahrain. These included the release of all political prisoners, the dissolution of the State Security Court and the abolition of the 1974 Decree on State Security Measures. Additionally, many Bahraini citizens were permitted to return after several years in exile overseas.[6] In 2002, he declared himself king. He enjoys wide executive authorities which include appointing the prime minister and his ministers, commanding the army, chairing the Higher Judicial Council, appointing the parliament's upper half and dissolving its elected lower half.[7](p. 15) 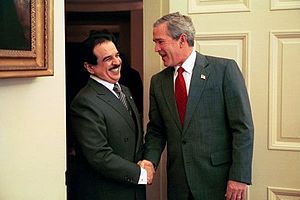 After Hamad took power in 1999, he focused on attaining stability in a nation riddled with profound tensions after the 1990s uprising. The King succeeded in improving the living standards and in making Bahrain a financial hub. During the period 2003–2010 the majority Shi'ite community[citation needed] accused his government of corruption, discrimination in housing and jobs, recruiting foreigners to the military services and bringing Sunni tribes from Asia to change the demographic composition of the nation.[citation needed]

Although King Hamad's reign has seen the admittance of Shi'ites into positions in the government, there have still been calls for a more equitable distribution of positions and jobs. The Al Khalifa family lead a large number of ministerial and governmental posts including the Ministry of the Interior,[8] Ministry of Justice,[9] the Ministry of Finance,[10] the Ministry of Culture,[11] the Ministry of Foreign Affairs,[12] the Bahrain Economic Development Board[13] and the Supreme Council for Women.[14] Also, the vast majority of significant positions in the Bahrain Defence Force are filled with Sunnis,[15] who account for around a third of the population. King Hamad claims that he is giving an equal chance to all Bahrainis regardless of their sect.[citation needed]

In October 2010, Hamad's government accused 24 Shi'ite Bahraini citizens of forming a terrorist cell linked to Iran and trained in Syria intending to overthrow the regime, and for planning terrorist attacks. Opposition parties denounced the accusations and described it as propaganda. After a few weeks, tension rose again after the controversial Bahraini parliamentary election, 2010 when the main opposition bloc Al Wefaq National Islamic Society with secularist National Democratic Action Society (Waad) complained that the election system was unfair and that there were aims to reduce the number of opposition chairs in the parliament, although the first party won nearly 40% of the available seats.[citation needed]

On 14 February 2011, the tenth anniversary of a referendum in favour of the National Action Charter, and ninth anniversary of the writing of the Constitution of 2002, Bahrain was rocked by protests inspired by the Arab Spring and co-ordinated by a Facebook page named "Day of Rage in Bahrain", a page that was liked by tens of thousands just one week after its creation. The Bahrain government responded with what has been described as a "brutal" crackdown[16][17][18] on the protests, including violations of human rights that caused anger. Later on, demonstrators demanded that Hamad step down.[19] As a result of this "massive" crackdown, Foreign Policy Magazine classified him as ranking 3rd out of 8 of "America's Unsavory Allies" calling him "one of the bad guys the U.S. still supports".[20]

On 11 February 2011, King Hamad ordered that 1,000 Bahraini Dinars (approximately US$2,667) be given to "each family" to celebrate the tenth anniversary of the National Action Charter referendum. Agence France-Presse linked the BD1,000 payments to 14 February demonstration plans.[21]

On 15 February 2011, Hamad apologized for the deaths of two demonstrators in a rare TV speech and urged an investigation into the incident.[7] Two days later, four protesters were killed and hundreds wounded when protesters were attacked in Pearl Roundabout at 3:00 am local time. The Pearl Roundabout was evacuated and encircled by the Bahraini army. Two days later, Prince Salman, Hamad's son, ordered the withdrawal of army troops from there after the death of another protester caused by live ammunition next to Pearl roundabout. Later on, Hamad showed restraint while demonstrations against him continued for several weeks.[22][not in citation given] 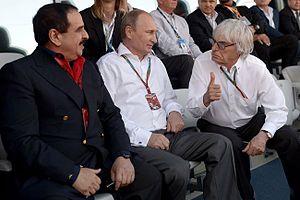 During the peak of the Bahraini uprising in mid March 2011, Hamad declared a State of National Safety for three months just after Salman summoned Peninsula Shield Force troops to enter Bahrain. Saudi Arabia deployed about 1,000 troops with armored support, and the United Arab Emirates deployed about 500 police officers. Opposition parties reacted strongly, calling it an "occupation". Hamad, however, claimed that he deployed the troops to "protect infrastructure and to secure key installations". After this step, the country's economy suffered losses estimated at billions. The security situation deteriorated in areas where people were demonstrating against him. While dozens of deaths were announced, including five who died in custody as a result of torture.

On 1 June 2011, protests erupted across Shia-dominated areas of Bahrain to demand Hamad's resignation and to end martial law, as he announced that the state of emergency was officially lifted.

In June 2011 Hamad commissioned the Bahrain Independent Commission of Inquiry, headed by respected human rights lawyer M. Cherif Bassiouni, to look into the events surrounding the unrest. The establishment of the BICI was praised by Barack Obama and the international community[23][24] as a step towards establishing responsibility and accountability for the events of the 2011–2012 Bahraini uprising. The BICI reported its findings in November 2011 and US Secretary of State Hillary Clinton "commend[ed] King Hamad bin Isa al-Khalifa's initiative in commissioning it".[25] In August 2012, Amnesty International stated that "the government's response has only scratched the surface of these issues. Reforms have been piecemeal, perhaps aiming to appease Bahrain's international partners, and have failed to provide real accountability and justice for the victims."[26]

Relations with the British court

King Hamad has good contacts with the British royal family. The king was invited by the British court to the wedding of Prince William, but declined amidst protests by human rights activists, who had pledged to disrupt his stay in Britain because of his violent response to demonstrators.[27] Earlier, in 2005, he was the only sitting foreign head of state to attend the second wedding of Prince Charles.[citation needed]

His attendance at the May 2012 Sovereign Monarchs' lunch, to celebrate the Diamond Jubilee of Queen Elizabeth II, caused some controversy, given the criticisms of his regime's human rights record.[28]

Hamad has four wives and has had in total twelve children: seven sons and five daughters:[5]