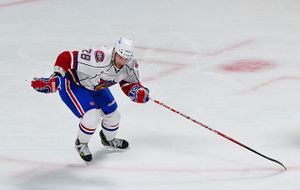 The Hamilton Bulldogs were a professional ice hockey team in the American Hockey League. They played in Hamilton, Ontario, at FirstOntario Centre (formerly known as Copps Coliseum), nicknamed 'The Dog Pound'. They were the AHL affiliate of the NHL's Edmonton Oilers and Montreal Canadiens as two separate franchises over 19 seasons of continuous participation in the AHL. The team won the Calder Cup once in its history, in 2007.

The Hamilton Bulldogs Hockey Club was first established in 1996 following the relocation of the Cape Breton Oilers. The team was nicknamed the "Bulldogs" as it was determined to best suit the City of Hamilton. The name "Hamilton Havoc" was runner-up.

On the ice, the club has reached the Calder Cup Finals three times. Firstly in 1997, the club's first year, and again in 2003 only to lose in both cases. The 2003 game 7 final was played June 12, 2003, vs the Houston Aeros. The attendance at Copps Coliseum was 17,428, making it the largest playoff crowd in the history of the AHL (the record was since broken in 2005 in Philadelphia). Houston won the game 3–0 and the series 4–3. The Bulldogs finally won the Calder Cup Final in 2007 against the Hershey Bears. This series was a rematch of the 1997 Calder Cup Final which Hershey won 4 games to 1. The Bulldogs reversed that in 2007 – Hamilton 4 games to Hershey's 1.

Off the ice, the club faced turmoil in 2000 resulting in a "Stay Dogs Stay" campaign spearheaded by Don Robertson, Ron Burnstein, Nick Javor, and club President Cary Kaplan, aimed at keeping the franchise in Hamilton. The campaign was a financial success and resulted in the club remaining in the Steel City with a bolstered fan base and an improved lease with the City of Hamilton.

2002–2015: Montreal Canadiens affiliation, and keeping the Bulldogs in Hamilton

In spite of a franchise high in attendance in 2001, the Edmonton Oilers announced plans to move their AHL franchise to Toronto. The same "Stay Dogs Stay" committee went back to work for the second consecutive year, and secured local interests who made a multimillion-dollar investment to secure ownership of the Quebec Citadelles franchise from the Montreal Canadiens and merged them with Hamilton, thus keeping the Bulldogs in town.[2] The achievement to preserve the team was a unique joint venture between the Montreal Canadiens, the Edmonton Oilers, the American Hockey League, and a local consortium of Hamilton owners, which allowed for a joint affiliation in 2002–03 between Montreal and Edmonton as ownership changed hands. After the 2002–03 season, the Oilers officially relocated their franchise to Toronto and became the Toronto Roadrunners. As part of the merger agreement, the Bulldogs were able to retain much of their team and staff that had been affiliated with the Canadiens to keep team continuity for the following season. Fans voted to keep the Bulldogs name which won over the Hamilton Canadiens and Hamilton Habs.

In the summer of 2004, Burlington businessman Michael Andlauer bought out much of the minority shares of the franchise to become majority owner, governor, and chairman of the Hamilton Bulldogs. Andlauer was part of the initial group of local business people who purchased the Bulldogs team from the Edmonton Oilers and the Citadelles franchise from the Montreal Canadiens in 2002. By 2011, Andlauer owned 100% of the franchise.

In 2010, fans saw the Bulldogs under coach Guy Boucher advance to the Western Conference finals against the Texas Stars, only to lose a hard fought series in game seven.

2015: repurchase by the Canadiens and relocation to St. John's

On March 12, 2015, Michael Andlauer announced that he had sold the Hamilton Bulldogs' AHL franchise back to the Canadiens, and that the team would move to St. John's, Newfoundland for the 2015–16 season as the St. John's IceCaps.[2] The existing True North Sports and Entertainment-owned IceCaps, which are affiliated with the Winnipeg Jets, moved back to Winnipeg as the Manitoba Moose. Concurrently, Andlauer announced his acquisition of the Ontario Hockey League's Belleville Bulls, and that the team would be moved to Hamilton and adopt the Bulldogs name.[3]

List of timelines for the two separate franchises known as the Hamilton Bulldogs.

List of Hamilton Bulldogs alumni who played more than 100 games in Hamilton and 100 or more games in the National Hockey League.