From Infogalactic: the planetary knowledge core
Jump to: navigation, search
For other uses, see Hamm (disambiguation).

listen), Latin: Hammona) is a city in North Rhine-Westphalia, Germany. It is located in the northeastern part of the Ruhr area. As of December 2003 its population was 180,849. The city is situated between the A1 motorway and A2 motorway. Hamm railway station is an important hub for rail transport and renowned for its distinctive station building.

The coat of arms has been in use in its present form for about 750 years. It shows the markish chessboard ("märkischen Schachbalken") in red and silver on a golden field. Originally it was the founders' coat of arms, i. e. the Counts of Mark. The chessboard and the colours are often displayed in the coats of arms of further towns founded by that family line. Similarly, the colours of the city are red and white.

The name Ham means "corner" in the old Low German dialect spoken at that time. In the old times the name thom Hamme would be used, which evolved slowly into its modern form Hamm. The name derives from the description of the Hamm's location in the corner of the Lippe river and the narrow Ahse affluent, where it was founded on Ash Wednesday in March 1226 by Count Adolf I of the Mark. 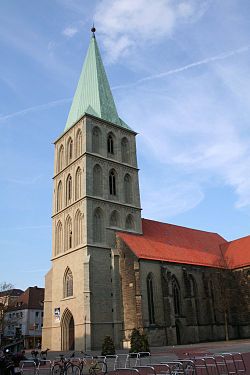 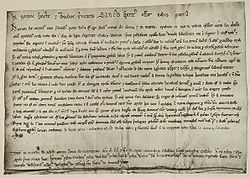 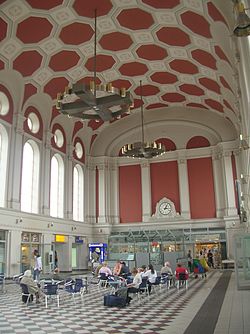 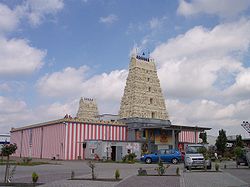 Until 1833 any population is an approximation, in later times the population was counted or updated by the local government or other institutions of the government.

The city council has 58 members, since 2004 the seating is the following:

Hamm has seven quarters (Stadtbezirk), each divided into residential areas like City, which actually means the center of the city around the Pauluschurch or like Hövel-Radbod near the former entrance to the coalmine Radbod in the quarter Bockum-Hövel. The following table shows the situation in 2006. Every quarter is named with the prefix Hamm, like Hamm-Bockum-Hövel or Hamm-Mitte.

The former town Bockum-Hövel today forms the quarter with the largest number of inhabitants, closely followed by the centre of the city Hamm-Mitte. The latter is the smallest quarter by metric size.

Hamm is currently twinned with:

In 2006 Hamm was the first city to accomplish a "Ratsbürgerentscheid" (citizens decision). Subject of the plebiscite was a plan to build a 43 ha city lake (2007–2010) near the city centre. 136,521 citizens were entitled to vote, 57,563 used that possibility and 56.9% refused their approbation for the project. As minimal vote 20% (of the total 136,521 voters) had to decide between one of the possibilities (20% for Yes or 20% for NO). The city council accepted the voting and stopped the plans. This procedure is planned for future projects in NRW. Also in Hamm established was the "Baugerichtstag e. V." a society organizing a congress about the German building law. The congress is held in a two years term.

The largest health facility is the Marien Hospital with its two separate buildings, Marien Hospital I the old building within the centre of the city and Marien Hospital II together 587 beds. Then there is the (EVK Hamm) Evangelisches Krankenhaus Hamm (Protestant Hospital) combined with the children's hospital south of the centre together 493 beds, the St. Barbara Klinik (Clinic) in Heessen with 422 beds and the Malteser Krankenhaus (Hospital) St. Josef in Bockum-Hövel with 260 beds. Additional there are the Klinik für manuelle Therapie (Clinic for manual therapy) within the quarter Bad Hamm (138 beds), the cure district. The Westfälisches Institut Hamm für Kinder- und Jugendpsychiatrie und psychotherapie (Westphalian Institute Hamm for Children's- and Youth psychiatry and psychotherapy) as an Institute of the federal state (158 beds) and the private Klinik (clinic) am Bärenbrunnen. (All Hospitals together have 2058 beds.) Former Hospitals are:

Hamm has six Gymnasien (grammar schools), two comprehensive schools and several Realschulen, Hauptschulen and Grundschulen (elementary schools). The oldest Gymnasium in Hamm is the Gymnasium Hammonense which was established as academic school (small university) with three faculties in 1657. The school declined in its importance and in 1781 merged with the local Latin school and got reformed by Prussia. The new combined school was humanist Gymnasium. In 1867 the "Märkisches Gymnasium" followed as the second Gymnasium of Hamm, in 1902 the "Freiherr vom Stein Gymnasium", in 1924 the "Beisenkamp Gymnasium" – first as "Oberlyceum" (Gymnasium for girls) – and in 1968 the "Galilei-Gymnasium" were established. Additionally in Schloss Heessen there is a private school including the Gymnasium. Both comprehensive schools in Hamm are younger foundations by the city during school reforms of NRW. Hamm is also well known for its many vocational schools: 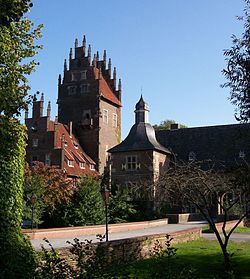 Major industrial branches are the coal-mining industry, steel industry, chemical industry and the car component supplier industry. In the last century there were four coal-mines within the urban district. Today the Bergwerk Ost in Herringen is the last operating coal mine with about 3,000 employees. Mannesmann Hoesch Präzisrohr, Westfälische Draht Industrie (WDI) and Böhler Thyssen Welding are the major representatives of the steel industry, the chemical industry is represented by DuPont in Uentrop and the car supplier industry by Hella KGaA Hueck & Co. factory 4 in Bockum-Hövel with about 1000 employees. The energy industry is represented by a RWE coal power plant and a further power plant (Trianel) in Uentrop. A new coal power plant is currently under construction. The THTR-300, also in Uentrop-Schmehhausen, was decommissioned in 1989. Alongside the A2, in the southern part of the urban district, a new business park inhabits the growing logistics business. Hamm is also known as "City of Law" (Stadt des Rechts) because of the greatest German regional appeal court (Oberlandesgericht), the local court (Amtsgericht), the industrial court (Arbeitgericht) and the industrial appeal court (Landesarbeitsgericht). The Chamber of Notaries and bar association of the regional appeal court Hamm and the courts are of greater influence on the appearance of the city. Several hospitals in the urban district are also important employers, for example the EVK Hamm has about 1000 employees.

The Waldbühne Hamm-Heessen in Heessen is one of the most active open-air theatres in Germany. The Städtische Musikschule Hamm is one of the oldest music schools in Germany. Hamm also has several active choirs and a jazz club and has been the home of many bands.

Hamm is linked to three motorways. The Bundesautobahn 1 (BAB 1 or A1, Puttgarden-Saarbrücken) named Hansaline with two connections No.81 and 82., the (BAB 2 or A2, Oberhausen-Berlin) with three connections No.17,18 and 19 and the A445 (Hamm-Arnsberg) which is connected by the B63 until the planned construction between Hamm and Werl is completed. The Kamener Kreuz is situated in the southwest of Hamm. Two "federal roads" (Bundesstrassen) the B61 and B63 intersect in the city centre. Several state roads (Landesstrassen) are connecting Hamm with its neighbouring towns and municipalities. 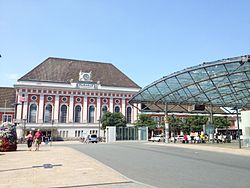 Hamm has three stations, the main railway station Hamm (Westfalen) and two minor stations, one in Bockum-Hövel and the other one in Heessen. The main station is one of the biggest railway hubs in Germany, and connected with one of the greatest marshalling yards of Europe, the latter now only partly operating. Notable is the railway station for its Art deco

Gründerzeit inspired building styles. Hamm is connected to the rail since 2 May 1847. Its huge railroad yard—Europe's biggest at the time[3]—was bombed repeatedly during World War II,[4][5] as was the city itself (in December 1944 it was hit by eleven raids on one day).[3]

The city bus net Hamm is served by the "Stadtwerke Hamm", with 65 buses, and the "Verkehrsgesellschaft Breitenbach". A regional bus service is served by different companies and both nets serve the central bus station, which is situated in front of the main railway station in the centre of Hamm. Hamm is part of the Verkehrsgemeinschaft Ruhr-Lippe. About 12 million people are using the bus net every year, transported by 50 bus lines with 500 bus stops within the city.

Hamm is the end of the "Datteln-Hamm-Kanal", three ports are situated in the urban district. The city port, the canal end port Uentrop, and the port of "Gersteinwerk". The ports of Hamm are the second biggest canal port by freight transact, 1.4 million tons a year by ships and 0.5 million tons by train. The city port allows for ships up to 110 metres length 11.45 meters width and 2.7 metres draft. It is linked with the railway by a track to the near main railway station and the marshaling yard. 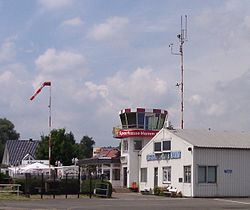