From Infogalactic: the planetary knowledge core
Jump to: navigation, search
For other uses, see Hammersmith (disambiguation).

Hammersmith is a district in west London, England, located in the London Borough of Hammersmith and Fulham. It is bordered by Shepherds Bush to the north, Kensington to the east, Chiswick to the west, and Fulham to the south, with which it forms part of the north bank of the River Thames. It is linked by Hammersmith Bridge to Barnes in the southwest. The area is one of west London's key commercial and employment centres, and has for some decades been the main centre of London's Polish minority.[1][2] It is a major transport hub for west London, with two London Underground stations and a bus station at Hammersmith Broadway.

See also: List of districts in Hammersmith and Fulham 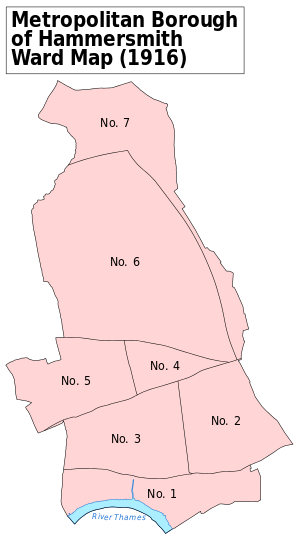 A map showing the wards of Hammersmith Metropolitan Borough as they appeared in 1916.

In the early 1660s, Hammersmith's first parish church, which later became St Paul’s, was built by Sir Nicholas Crispe who ran the brickworks in Hammersmith.[3] It contained a monument to Crispe as well as a bronze bust of King Charles I by Hubert Le Sueur.[4] In 1696 Sir Samuel Morland was buried there. The church was completely rebuilt in 1883, but the monument and bust were transferred to the new church.

The Hammersmith Suspension Bridge, designed by William Tierney Clark, was built across the Thames in 1827, and rebuilt in 1893.[3][5] In 1984–1985 the bridge received structural support, and between 1997 and 2000 the bridge underwent major strengthening work.[6]

In 1745, two Scots, James Lee and Lewis Kennedy, established the Vineyard Nursery, over six acres devoted to landscaping plants. During the next hundred and fifty years the nursery introduced many new plants to England, including fuchsia and the standard rose tree.[7][8]

House construction and industrial development flourished.[when?] Major industrial sites included the Osram lamp factory at Brook Green, the J. Lyons factory (which at one time employed 30,000 people) and the largest municipal power station in Britain, built near the gasworks in Sands End.

All these have subsequently been closed and redeveloped as the area has moved from an industrial base to a greater focus on commerce and services.

Panorama of the Thames river at Hammersmith, April 2011.

Hammersmith is located at the confluence of a key arterial route out of central London (the A4) with several local feeder roads and a bridge over the Thames. The focal point of the district is the commercial centre (the Broadway Centre) located at this confluence, which houses a shopping centre, bus station, an Underground station and an office complex. 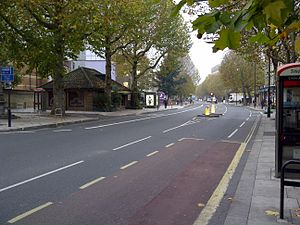 Stretching about 750m westwards from this centre is King Street, Hammersmith's main shopping street which contains its second shopping centre (Kings Mall), many small shops, the Town Hall, the Lyric Theatre, a cinema and two hotels. King Street is supplemented by other shops along Shepherds Bush Road to the north, Fulham Palace Road to the south and Hammersmith Road to the east.

Hammersmith's office activity takes place mainly to the eastern side of its centre, along Hammersmith Road and in the Ark, an architecturally-unique office complex to the south of the flyover which traverses the area. The offices of International SOS, Bechtel, Disney, Pokémon, L'Oréal, AOL UK, Accor UK, Next Fifteen Communications, US Airways, Rogers Stirk Harbour + Partners, Frost Meadowcroft, Lifschutz Davidson Sandilands and Royal Jordanian Airlines are all found in Hammersmith. Two NHS hospitals provide jobs in Hammersmith - Charing Cross Hospital to the south of the centre on Fulham Palace Road and Hammersmith Hospital in the north. Charing Cross Hospital is a large multi-disciplinary hospital with an accident & emergency department and teaching department run by the Imperial College School of Medicine.

Architecturally, Hammersmith is notable for 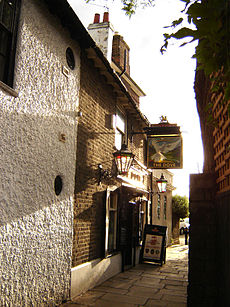 The famous Dove public house - entrance in the alley that is the only surviving trace of the old Hammersmith Village. (September 2005)

American broadcasters NBC and ABC both have their London news bureau in Hammersmith.

As of November 2014 a Bench was fitted after a Social Media campaign on the Traffic island outside Hammersmith Broadway (Hammersmith Bridge Road) as a tribute to the late Comedian Rik Mayall (as per Bottom opening credits. The show was set in Hammersmith but the original bench was removed). His fans have contributed a lot of money into the local economy in thousands of visits and events since his untimely death on 9 June 2014.

In addition to the cinema and pubs of King Street, leisure activity also takes place along Hammersmith's pedestrianised riverside, home to a number of pubs, rowing clubs and the riverside park of Furnival Gardens. Hammersmith has a municipal park Ravenscourt Park to the west of the centre. Its facilities include tennis courts, a basketball court, a bowling lawn, a paddling pool and playgrounds.[18] The whole area is covered by the same W6 postcode as Hammersmith town centre.

"Round Table London Hammersmith 48" is a community service and networking club for men aged 18 to 45. Regular meetings are held at the London Corinthian Sailing Club on the banks of the river Thames.

The "Polish Social and Cultural Centre" (known as POSK)[19] is based in Hammersmith, with facilities including a library, a theatre, restaurants and cafes, and houses many other Polish organisations. 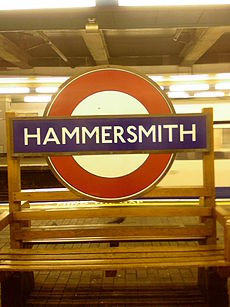 The area is on the main A4 trunk road heading west from central London towards the M4 motorway and Heathrow Airport. The A4, a busy commuter route, passes over the area's main road junction, Hammersmith Gyratory System, on a long viaduct, the Hammersmith Flyover. Hammersmith Bridge, the first suspension bridge over the River Thames, carries traffic to and from Barnes and southwest London.

The centre of Hammersmith is served by two London Underground stations named Hammersmith: one is served by the Hammersmith & City and Circle lines and the other is served by the Piccadilly and District lines. The latter tube station is part of a larger office, retail and transport development, locally known as "The Broadway Centre". Hammersmith Broadway, itself, stretches from the junction of Queen Caroline Street and King Street in the west to the junction of Hammersmith Road and Butterwick in the east. It forms the north side of the gyratory system also known as Hammersmith Roundabout. The Broadway Shopping Centre includes a large modern bus station, which is open 24 hours a day and served by a large number of buses, night buses, airport transfer buses and some long distance coaches.

The length of King Street places the westernmost shops and offices closest to Ravenscourt Park tube station on the District line, one stop west of Hammersmith itself.

Hammersmith used to have two public passenger transport depots: Hammersmith Trolleybus Depot (coded "HB") situated opposite Fulham Palace Road and a Motor Bus Garage, known as Riverside (coded "R") to stop confusion with "HB". Riverside was originally a mansion and after the bus operations ceased the fascia of the building was listed.

Hammersmith features in Charles Dickens' Great Expectations as the home of the Pocket family. Pip resides with the Pockets in their house by the river and partakes in boating on the Thames.

News from Nowhere (1890) written by William Morris is a utopian novel that describes a journey upstream the River Thames from Hammersmith towards Oxford; it is of growing interest to contemporary ecological and socialist political movements.

In 1930, Gustav Holst composed a work for military band (later rewritten for orchestra) entitled Hammersmith to reflect his impressions of the area, having lived across the river in nearby Barnes for nearly forty years. It begins with a haunting musical depiction of the River Thames flowing underneath Hammersmith Bridge. Holst was a music teacher at St Paul's Girls' School, where he composed many of his most famous works, including The Planets suite. A music room in the school is named after him.

Hammersmith has provided a location for several television programmes, including the BBC comedy series Bottom, Channel 4's TFI Friday, and the vampire drama Ultraviolet. The opening credits of Bottom show the Hammersmith Broadway (also mentioned in The Pogues' song Dark Streets of London) development, then called Centre West, when it was under construction. In addition, the Flying Squad were Hammersmith-based in the 1970s TV series The Sweeney. Dennis Potter's The Singing Detective contains scenes that appear to be under and adjacent to Hammersmith Bridge, and Peter Howitt's Sliding Doors includes scenes in and around Hammersmith Bridge. The popular Thames Television series Minder also features black and white photographs of Hammersmith Bridge and the Blue Anchor pub in the closing credits.

The BBC's 2008 miniseries Lost in Austen stars Jemima Rooper (who was born in Hammersmith) as Amanda Price, a character who lives in modern day Hammersmith, but is transported (through a portal in her flat's bathroom) into Jane Austen's fictional story Pride and Prejudice. Amanda Price gets stuck in fictional Georgian England and upon returning to Hammersmith of the 18th century, discovers it to be a small village miles from London.