From Infogalactic: the planetary knowledge core
Jump to: navigation, search
This article is about Hampton Court Park or Home Park, London. For other uses, see Home Park (disambiguation). 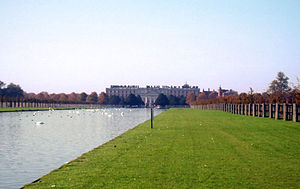 Hampton Court, from the park

Hampton Court Park – sometimes called the Home Park – is adjacent to Hampton Court Palace and Gardens in South London, United Kingdom, mostly lying within East Molesey, with a smaller area in Kingston upon Thames. Hampton Court Park is a royal park, but not one of the eight Royal Parks of London because it is the site of a Palace. It is managed by the Historic Royal Palaces.[1] In September 2014 part of it was designated a biological Site of Special Scientific Interest together with Bushy Park and Hampton Court Golf Course as Bushy Park and Home Park SSSI.[2][3][4]

It is a walled deer park of around 700 acres (280 ha) in area, with a herd of aroung 300 fallow deer,[5] and has been open to the public since 1894. The A308 road and the River Thames form its boundaries. North of the A308 is the better-known Bushy Park. The Royal Mews still graze some of their horses on the park during the summer months.

One of the main features of the park is the Long Water which runs roughly eastward from the back of Hampton Court Palace. At the eastern end is the Golden Jubilee Fountain.

The annual Hampton Court Flower Show is held in 25 acres (10 ha) of the Home Park. It is organized by the Royal Horticultural Society and began in 1990. Many prefer it to the better known Chelsea Flower Show because there is more space, and plants and equipment can be bought at the show. As it is the world's most popular event of this type extensive traffic jams can build up. The show has sometimes been criticized for risking damage to historic features in the park. 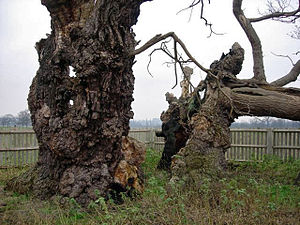 The Mediaeval Oak – said to be 750 years old

A tree, called the Mediaeval Oak (or Methuselah's Oak), situated in one of the tees for the golf course in the southern part of the park, is said to be 750 years old.