Hanau is a town in the Main-Kinzig-Kreis, in Hessen, Germany. It is located 25 km east of Frankfurt am Main. Its station is a major railway junction. Hanau is famous for being the birthplace of Jakob and Wilhelm Grimm and Franciscus Sylvius. In 1963, the town hosted the third Hessentag state festival. Until 2005, Hanau was the administrative centre of the Main-Kinzig-Kreis.

The historic core of Hanau is situated within a semicircle of the river Kinzig which flows into the river Main just west of the town. Today, after a substantial expansion during the 19th and 20th centuries it also extends to the river Main and after a restructuring of municipal borders within Hessen in the 1970s a couple of nearby villages and towns were incorporated. After this change, Hanau for the first time also extended to the south bank of the Main river.

The name is derived of "Hagenowe" which is a composition out of "Haag" (wood) and "Aue" (open land by the side of a river). 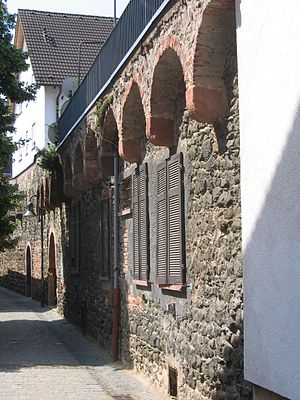 Relic of the first (medieval) town-fortification 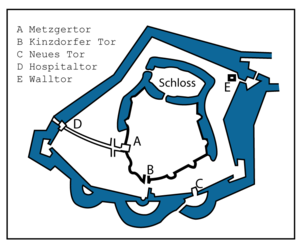 As a place of settlement Hanau was first mentioned in 1143. Then it was the site of a castle which used the waters of the river Kinzig as a defense. The castle belonged to a noble family, calling themselves "of Hanau" since the 13th century. Starting from this castle a village developed and became a town in 1303. As a result of this history, the main church of Hanau stood outside its walls in the village of Kinzdorf. The villagers moved into the town, Kinzdorf became an abandoned village leaving only the church. Only in the 15th century was the status of the Hanau parish church transferred to the church of Mary Magdalene within the town walls.

At the end of the 16th century, Count Philipp Ludwig II attracted Protestant refugees from the Netherlands and France to found their own settlement south of Hanau. This was of high economic interest for him because these Walloons brought high-class trade, their knowledge of jewellery and other production of luxury items and therefore taxes to his county. Out of this tradition, goldsmiths are still trained in Hanau. Hanau also was the site of the first workshop to produce Faience within Germany. These new citizens were granted privileges and they formed their own community, church and administration for the "new town of Hanau" (Neustadt Hanau) wholly separate from the existing community. It took more than 200 years to amalgamate both. The new town – larger than the old one – was protected by a then very modern fortification in Baroque-style which proved a big asset only a few years later in the Thirty Years' War. The town survived a siege in 1637 with only minor damage.

The new citizens formed the major economic and political power within the County of Hanau and in 1642 played a leading role in the succession of Count Fredrik Casimir of Hanau Lichtenberg into the County of Hanau-Münzenberg of which the town of Hanau was the capital.

In 1736 Johann Reinhard III of Hanau-Lichtenberg, the last of the Counts of Hanau, died. Those parts of his county belonging to the County of Hanau-Münzenberg, which included Hanau, were inherited by the Landgrave of Hesse-Kassel. Due to dynastic troubles within this family the County of Hanau-Münzenberg was created a separate state from the Landgraviate until 1786. So Hanau stayed capital for another 50 years. Even after that it became – after Kassel – the town second in importance within Hesse-Kassel. 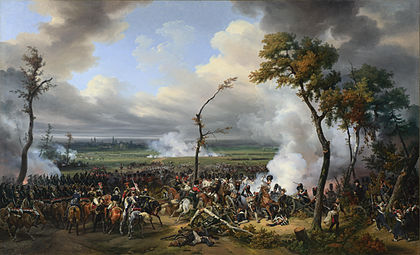 During the Napoleonic Wars the Emperor himself ordered the fortifications of Hanau to be destroyed. This created a chance for both parts of the town to expand across their traditional limits. In 1813, the Battle of Hanau took place near the city between French troops and Austro-Bavarian forces. During the 1820s the administrations of both towns of Hanau were merged. The first common Mayor, who became Lord Mayor (Oberbürgermeister) was de (Bernhard Eberhard), later to become prime minister and minister of the interior of Kurhessen after the Revolution of 1848.

With its pre-industrial workshops Hanau became a nucleus of a heavy industrialisation during the 19th century: From within the city (e.g.: Heraeus) as well as from outside (e.g. Degussa, Dunlop). This was heavily supported by its development as an important railway interchange of six railway lines, most of them main lines:

In the 19th century, Hanau was a centre of the German democratic movement and contributed significantly both in 1830 and in the Revolution of 1848. As part of this movement the German Gymnastic League (Deutscher Turnerbund) was founded here in 1848. Hanau was finally annexed to Prussia like all of Hesse-Kassel in 1866 after its Prince-elector took the Austrian side in the Austro-Prussian War. It remained part of Prussia until 1945.

In the late 19th century Hanau became a major garrison town. Due to its interchange of railway lines a large detachment of military railway-engineers as well as other military units were stationed here.

During World War II, Hanau was for the most part destroyed by British airstrikes in March 1945 a few days before it was taken by the US Army. It housed a large US Army garrison until 2008. The extensive US facilities included Hanau Army Airfield, also known as Fliegerhorst Langendiebach.

In 2010, the town started a huge building project to completely redesign the inner city. Those are the largest construction works in the city since the reconstruction after World War II.

At present, many inhabitants work in the technological industry (VAC, Heraeus) or commute to Frankfurt. Frankfurt International Airport is only 30 km away.

Hanau is twinned with 5 other towns:[2]

In addition it is associated with two other towns: 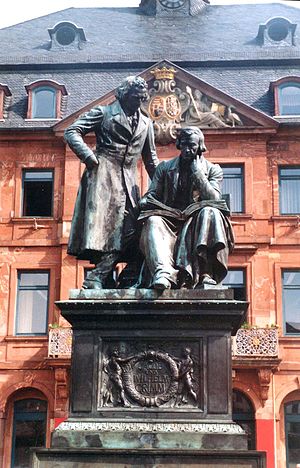 Sculpture of Brothers Grimm in Hanau, by Syrius Eberle