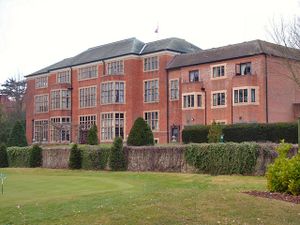 Hanbury Manor is located on Cambridge Road, Ware, Hertfordshire, near the village of Thundridge. Formerly known as Poles, it was originally a mansion house built and owned by the Hanbury family. Subsequently a boarding school, it is now a hotel and country club owned by Marriott Hotels.

The first dwelling built on the property was constructed in the 16th century. The first name 'Poles' was derived from the house being at one time owned by Reginald Pole, a lay cardinal, whose mother, Margaret Pole, 8th Countess of Salisbury, was the last legitimate Plantagenet and who was later the last catholic Archbishop of Canterbury.

During the latter half of the 18th century the Hanburys became lessees and later purchasers of Poles. The Hanbury family originally came from France, with Geoffrey De Hanbury settling in Worcestershire in the 14th century.

Sampson Hanbury bought Poles about the year 1800. From 1799 to 1830 he was Master of the Puckeridge Hounds. Childless, he left Poles to his widow, Agatha.[1]

Robert Hanbury was senior partner in Truman, Hanbury, Buxton & Co. He inherited Poles on the death of his Aunt Agatha in 1847. He was a JP, a Deputy Lieutenant, and in 1854 High Sheriff of Hertfordshire.[1]

His son, also Robert Hanbury (1823–1867) (also Robert Culling Hanbury after his second marriage) died before inheriting. He too was a partner in Truman, Hanbury, Buxton & Co. and from 1857 to 1867 was Member of Parliament for Middlesex.[1]

Edmund Hanbury too was a partner in the brewing company Truman, Hanbury, Buxton & Co from 1873,[2] from which he retired in 1886. On his grandfather's death he brought his family to live at Poles,[3] a property which, at that time, was in excess of 2,000 acres (8.1 km2). His wife, Amy, found the house to be a rambling, uninhabitable monstrosity and refused to live in it.

Architects Sir Ernest George and Harold Peto designed a replacement grand house,[4] built by Simpsons & Ayrton of Paddington in 1890-91 at a cost of £20,000. The final costs of £30,000 probably marked the beginning of the end of this branch of Hanbury in Hertfordshire. The house, built in the Jacobean style in red brick with blue brick reticulation and stone mullioned windows, was the first in the area to boast not only electricity but a central heating system.

Like his father, he became a J.P. and Deputy Lieutenant and in 1891 High Sheriff of Hertfordshire.[5] In later life, he was for two years, 1906–1909, Prime Warden of the Worshipful Company of Fishmongers.[1]

In 1923 the house was purchased by the Faithful Companions of Jesus with the intent of establishing a convent school.[4] The house was transformed in 1934 with the addition of a gym, classrooms, dormitories, a three-storeyed tower, and a new chapel. From 1974 girls from Poles Convent progressed into the sixth form of St. Edmund's College. By the time the school closed in 1986 St. Edmund's College was fully co-educational.[6][7][8]

The estate was redeveloped and extended over a three-year period by Landbase Ltd as a 5-star hotel and country club, opening in 1990 with RockResorts as the first operator.[10] The development was majority funded by local building firm Hubert C Leach.

The original school block, with its gym, chapel and classrooms, formed the base for a conference and banqueting centre set around the courtyard. The chapel, now named Poles Hall, has become the main banqueting hall. The development in 1988/89 added a wing onto the main building containing swimming pool, gym, changing rooms, squash courts, bar, brasserie restaurant, and billiard room.[11] An annexe next to the walled garden (known as the Garden Court) added 53 bedrooms at the same time. [12]

Country Club Hotel Group took over as the hotel operator in 1994,[13] and subsequently was bought out by Marriott International, who added a 65-bedroom extension in 1999[14] and currently own and operate the hotel and golf course.

The wedding of footballer Paul and Sheryl Gascoigne took place there in 1996, with DJs Chris Evans and Danny Baker.