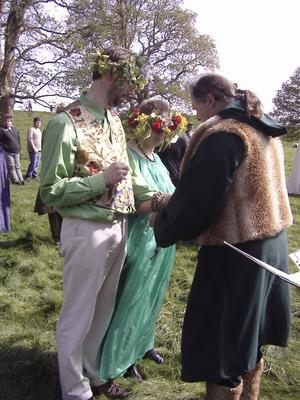 Handfasting is a term for a wedding ceremony in Neopaganism, especially in Wicca.

Further information: History of marriage in Great Britain and Ireland

Handfasting is a historical term for "betrothal" or "wedding". In the Early Modern history of Scotland (16th and 17th centuries), especially in the Hebrides, the term could also refer to a temporary marriage. The term has come to be used as a replacement for "marriage" in the vocabulary of Neopaganism, especially in Wicca.[1]

The verb to handfast in the sense of "to formally promise, to make a contract" is recorded for Late Old English, especially in the context of a contract of marriage. The derived handfasting is for a ceremony of engagement or betrothal is recorded in Early Modern English. The term was presumably loaned into English from Old Norse handfesta "to strike a bargain by joining hands"; there are also comparanda from the North Sea Germanic sphere, Old Frisian hondfestinge and Middle Low German hantvestinge. The term is derived from the verb to handfast, used in Middle to Early Modern English for the making of a contract.[2]

The term "handfasting" or "hand-fasting" has been in use in Celtic neopaganism and Wicca for wedding ceremonies from at least the late 1960s, apparently first used in print by Hans Holzer.[3] It was popularised by the 1991 film The Doors, depicting a fictional version of the real 1970 handfasting ceremony of Jim Morrison and Patricia Kennealy-Morrison (with the real Patricia Kennealy-Morrison playing the Celtic Pagan priestess). The expression "handfasting" is also found in newsgroup discussions from the early 1990s.[4]

In Neopaganism, and particularly in Wicca, "handfasting" is a term used for a wedding ceremony. The marriage vows taken may be for "a year and a day," "a lifetime", "for all of eternity" or "for as long as love shall last." As with many Neopagan rituals, some groups may use historically attested forms of the ceremony, striving to be as traditional as possible, while others may use only the basic idea of handfasting and largely create a new ceremony.[5] In some traditions, the couple may jump over a broom at the end of the ceremony. Some may instead leap over a small fire together. 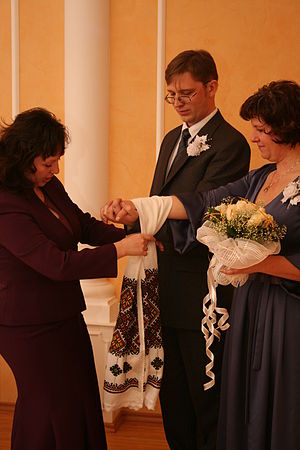 Civil wedding ceremony in Ukraine. The cloth is a ceremonial rushnyk decorated with traditional Ukrainian embroidery. 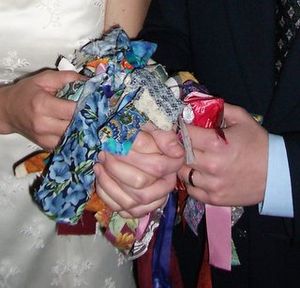 An example of a handfasting knot where each wedding guest has tied a ribbon around the clasped hands of the couple.

By the 2000s, the term "handfasting" has also come to be interpreted literally, as the symbolic act of tying a marrying couple's hands together with a ribbon (as opposed to referring to a supposedly "ancient" form of temporary marriage). Such a custom is found in various traditions[clarification needed] (but as discussed above it is not the origin of the English term "handfasting" ). It has probably entered the English-speaking mainstream from Neopagan wedding ceremonies during the early 2000s; such a ceremony is described and attributed to "pre-Christian times" in Mary Neasham, Handfasting: A Practical Guide (Green Magic, 2000, ISBN 9780954296315). Evidence that the term "handfasting" had been re-interpreted as describing this ceremony specifically is found in the later 2000s, e.g. "handfasting—the blessed marriage rite in which the hands of you and your beloved are wrapped in ribbon as you 'tie the knot.'"[6] By the 2010s, "handfasting ceremonies" were on offer by commercial wedding organizers and had mostly lost their Neopagan association (apart from occasional claims that attributes the ceremony to the "ancient Celts").[7] The term "handfasting ribbon" appears from about 2005.[8]