Hanlith is a small village and civil parish in the Craven district of North Yorkshire, England. It is situated near Kirkby Malham and tourist attraction Malham Cove. It is about 10 miles (16 km) north west of Skipton, and consists of only 13 houses.

Hanlith Hall dates back as a manor to the Domesday Book of 1084 when it was spelt Hangelief meaning 'King's land'. It belonged to the Dehelington and Medcalfe families until about 1347, and then became tenanted to the Serjeantson family who remained there for 550 years. The Hall was remodelled in the 20th century. 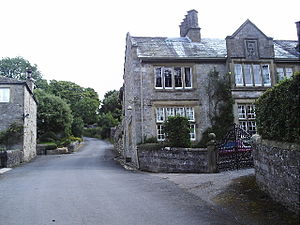 Hanlith, the 17th century but much modified Hanlith Hall on the right