Hannibal Hamlin (August 27, 1809 – July 4, 1891) was the 15th Vice President of the United States (1861–1865), serving under President Abraham Lincoln during the American Civil War. He was the first Vice President from the Republican Party.

Prior to his election in 1860, Hamlin served in the United States Senate, the House of Representatives, and, briefly, as the 26th Governor of Maine. 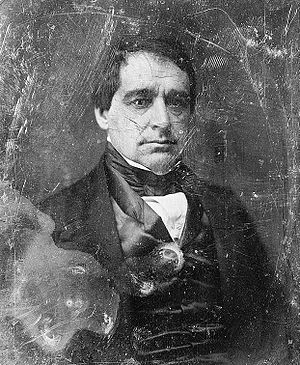 Hamlin was born to Cyrus Hamlin and his wife Anna, née Livermore, in Paris, Maine. He was a descendant in the sixth generation of English colonist James Hamlin, who had settled in the Massachusetts Bay Colony in 1639, and a grandnephew of U.S. Senator Samuel Livermore II[1] of New Hampshire, and the son-in-law of Stephen Emery, Maine's Attorney General in 1839–1840.[2]

Hamlin attended the district schools and Hebron Academy and later managed his father's farm. From 1827 to 1830 he published the Oxford Jeffersonian newspaper in partnership with Horatio King.[3] He studied law with the firm headed by Samuel Fessenden,[4] was admitted to the bar in 1833, and began practicing in Hampden, a suburb of Bangor, where he lived until 1848.[citation needed]

Hamlin married Sarah Jane Emery of Paris Hill in 1833. After Sarah died in 1855, he married her half-sister, Ellen Vesta Emery in 1856. He had four children with Sarah: George, Charles, Cyrus and Sarah, and two, Hannibal E. and Frank, with Ellen. Ellen Hamlin died in 1925.[5]

Hamlin's political career began in 1835, when he was elected to the Maine House of Representatives.

Appointed a Major on the staff of Governor John Fairfield, he served with the militia in the bloodless Aroostook War of 1839, and the negotiations he facilitated between Fairfield and Lieutenant Governor John Harvey of New Brunswick helped reduce tensions and make possible the Webster-Ashburton Treaty, which ended the war.

Hamlin unsuccessfully ran for the United States House of Representatives in 1840 and left the State House in 1841. He later served two terms in the United States House of Representatives, from 1843 to 1847. He was elected to fill a U.S. Senate vacancy in 1848, and to a full term in 1851. A Democrat at the beginning of his career, Hamlin supported the candidacy of Franklin Pierce in 1852.

From the very beginning of his service in Congress, he was prominent as an opponent of the extension of slavery. He was a conspicuous supporter of the Wilmot Proviso and spoke against the Compromise Measures of 1850. In 1854, he strongly opposed the passage of the Kansas–Nebraska Act, which repealed the Missouri Compromise. After the Democratic Party endorsed that repeal at the 1856 Democratic National Convention, on June 12, 1856, he withdrew from the Democratic Party and joined the newly organized Republican Party, causing a national sensation.

The Republicans nominated him for Governor of Maine in the same year. He carried the election by a large majority and was inaugurated on January 8, 1857. In the latter part of February 1857, however, he resigned the governorship, and was again a member of the United States Senate from 1857 to January 1861.

1860 election campaign button for Abraham Lincoln and Hannibal Hamlin. The other side of the button has Lincoln's portrait.

In 1861, Hamlin became Vice President under Abraham Lincoln, whom he did not meet until after the election. Maine was the first state in the Northeast to embrace the Republican Party, and the Lincoln–Hamlin ticket thus made sense in terms of regional balance. Hamlin was also a strong orator, and a known opponent of slavery. While serving as Vice President, Hamlin had little authority in the Lincoln Administration, although he urged both the Emancipation Proclamation and the arming of Black Americans. He strongly supported Joseph Hooker's appointment as commander of the Army of the Potomac. Hooker's command of this army would end in failure at the Battle of Chancellorsville.

Beginning in 1860, Hamlin was a member of Company A of the Maine Coast Guard, a militia unit. When the company was called up in the summer of 1864, Hamlin was told that because of his position as Vice President, he did not have to take part in the muster. He opted to serve, arguing that he could set an example by doing the duty expected of any citizen, and the only concession made because of his office was that he was quartered with the officers. He reported to Fort McClary in July, initially taking part in routine assignments including guard duty, and later taking over as the company cook. He was promoted to corporal during his service, and mustered out with the rest of his unit in mid-September.[6][7]

In June 1864, the Republicans and War Democrats joined to form the National Union Party. Although Lincoln was renominated, War Democrat Andrew Johnson of Tennessee was named to replace Hamlin as Lincoln's running mate. Lincoln was seeking to broaden his base of support and was also looking ahead to Southern Reconstruction, at which Johnson had proven himself adept as military governor of occupied Tennessee. Hamlin, by contrast, was an ally of Northern radicals (who would later impeach Johnson). Lincoln and Johnson were elected in November 1864, and Hamlin's term expired on March 4, 1865.

Hamlin and Lincoln were not close personally, but had a good working relationship. At the time, the Vice President was considered part of the legislative branch in his role as President of the Senate, and so did not attend cabinet meetings; thus, Hamlin did not regularly visit the White House. It was said that Mary Todd Lincoln and Hamlin disliked each other. For his part, Hamlin complained, "I am only a fifth wheel of a coach and can do little for my friends."[8]

Although Hamlin narrowly missed becoming President, his vice presidency would usher in a half-century of sustained national influence for the Maine Republican Party. In the period 1861–1911, Maine Republicans occupied the offices of Vice President, Secretary of the Treasury (twice), Secretary of State, President pro tempore of the United States Senate, Speaker of the United States House of Representatives (twice), and would field a presidential nominee in James G. Blaine, a level of influence in national politics unmatched by subsequent Maine political delegations.

After leaving the vice presidency Hamlin served briefly as Collector of the Port of Boston. Appointed to the post by Johnson, Hamlin resigned in protest over Johnson's Reconstruction policy and accompanying efforts to build a political following loyal to him after he had been repudiated by the Republicans. Republicans had supported Johnson as part of the National Union ticket during the war, but opposed him after he became President and his position on Reconstruction deviated from theirs.[9]

Not content with private life, Hamlin returned to the U.S. Senate in 1869 to serve two more 6-year terms before declining to run for re-election in 1880 because of an ailing heart. His last duty as a public servant came in 1881 when then-Secretary of State James G. Blaine convinced President James A. Garfield to name Hamlin as United States Ambassador to Spain. Hamlin received the appointment on June 30, 1881, and held the post until October 17, 1882.

Upon returning from Spain, Hamlin retired from public life to his home in Bangor, Maine, which he had purchased in 1851. The Hannibal Hamlin House – as it is known today – is located in central Bangor at 15 5th Street; incorporating Victorian, Italianate, and Mansard-style architecture, the mansion was posted to the National Register of Historic Places in 1979.[10]

On Independence Day, July 4, 1891, Hamlin collapsed and fell unconscious while playing cards at the Tarratine Club he founded in downtown Bangor. He was then placed on one of the club's couches and died a few hours later. He was 81. Hannibal Hamlin was buried in the Hamlin family plot at Mount Hope Cemetery in Bangor, Maine.[11] He had survived six of his successors as Vice President: Andrew Johnson, Schuyler Colfax, Henry Wilson, William A. Wheeler, Chester A. Arthur and Thomas A. Hendricks. From June 4, 1887 to March 4, 1889, he was the only living Vice President and afterwards he continued to be the only living former Vice President until his own death in 1891. 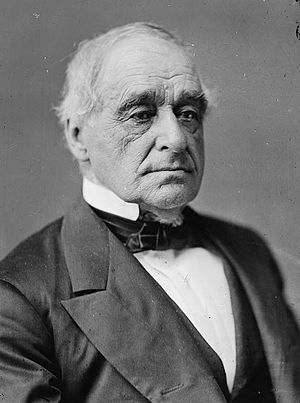 Hamlin in his elder years

Hamlin had four sons who grew to adulthood: Charles Hamlin, Cyrus Hamlin, Hannibal Emery and Frank Hamlin. Charles and Cyrus served in the Union forces during the Civil War, both becoming generals, Charles by brevet. Cyrus was among the first Union officers to argue for the enlistment of black troops, and himself commanded a brigade of freedmen in the Mississippi River campaign. Charles and sister Sarah were present at Ford's Theater the night of Lincoln's assassination. Hannibal Emery Hamlin was Maine Attorney General from 1905 to 1908. Hannibal Hamlin's great-granddaughter Sally Hamlin was a child actor who made many spoken word recordings for the Victor Talking Machine Company in the early years of the 20th century.

Hannibal's older brother, Elijah Livermore Hamlin, was president of the Mutual Fire Insurance Co. of Bangor, and the Bangor Institution for Savings.[12] He was twice an unsuccessful candidate for Governor of Maine in the late 1840s, though he did serve as Mayor of Bangor in 1851–52. The brothers were members of different political parties (Hannibal a Democrat, and Elijah a Whig) before both becoming Republican in the later 1850s.[13] Hannibal's nephew (Elijah's son) Augustus Choate Hamlin was a physician, artist, mineralogist, author, and historian. He was also Mayor of Bangor in 1877–78, and a founding member of the Bangor Historical Society.[14] Augustus served as surgeon in the 2nd Maine Volunteer Infantry Regiment during the Civil War, eventually becoming a U.S. Army Medical Inspector, and later the Surgeon General of Maine. He wrote books about Andersonville Prison and the Battle of Chancellorsville.[15] Hannibal's grand-nephew (Elijah's grandson) Isaiah K. Stetson was Speaker of the Maine House of Representatives in 1899–1900,[16] and owned a large company in Bangor which manufactured and shipped lumber and ice and ran a shipyard and marine railway.[17]

Hannibal's first cousin Cyrus Hamlin, who was a graduate of the Bangor Theological Seminary, became a missionary in Turkey, where he founded Robert College. He later became president of Middlebury College in Vermont. His son, A. D. F. Hamlin, Hannibal's first cousin once removed, became a professor of architecture at Columbia University and a noted architectural historian.

There are biographies of Hamlin by his grandson Charles E. Hamlin (published 1899, reprinted 1971) and by H. Draper Hunt (published 1969).

There are statues in Hamlin's likeness in the United States Capitol and in a public park (Norumbega Mall) in Bangor, Maine. There is also a building on the University of Maine Campus, in Orono, named Hannibal Hamlin Hall. This burned down in 1945, in a fire that killed two students, but was subsequently rebuilt. Hannibal Hamlin Memorial Library is next to his birthplace in Paris, Maine.

Sculptor Charles Tefft of Brewer, Maine, created this bronze statue of Hannibal Hamlin, which was dedicated in 1927 in downtown Bangor.

Hamlin's house in Bangor subsequently housed the Presidents of the adjacent Bangor Theological Seminary. It is listed on the National Register of Historic Places, as is Hamlin's birthplace in Paris, Maine (as part of the Paris Hill Historic District).