Annibale Maria di Francia, or Hannibal, (July 5, 1851 in Messina, Italy – June 1, 1927) is a saint venerated by the Roman Catholic Church. His father Francis was a Knight of the Marquises of St. Catherine of Jonio, Papal Vice-Consul and Honorary Captain of the Navy. His mother, Anna Toscano, belonged to the noble family of the Marquises of Montanaro.

The third of four children, he lost his father when he was only fifteen months old. The sad experience of being an orphan would have profound effect on his life and made him deeply empathetic towards orphans.[1] At the age of seven he enrolled in the College of St. Nicholas, run by the Cistercian Fathers. He was a devout child. Here under the guidance of his spiritual director, he was introduced to a devout life and he developed such love for the Eucharist that he was allowed to receive the Holy Host daily, something exceptional in those days.

He was only seventeen, when as he was at prayer in front of the Blessed Sacrament solemnly exposed, he was given the "revelation of Rogate", that is, he deeply felt that vocations in the Church only come through prayer. Later on he found in the Gospel the very words of Jesus commanding such prayer: "Beg the harvest master to send out laborers to gather his harvest". (Mt 9:38; Lk 10:2). These words became the main source of inspiration for his life and the charism which led his apostolate.[2]

On July 11, 1909 he wrote to Pope S. Pius X: "From my youth I have devoted myself to the words of the Gospel: Pray therefore the Lord of the Harvest...In my charitable institutions, orphans, poor, priests and nuns, all pray incessantly to the loving Hearts of Jesus and Mary, to the Patriarch St. Joseph and to the Apostles, that they may provide the Holy Church with numerous and chosen laborers for the harvest of souls".

Young Annibale proved to be of high intelligence and had a poetic disposition. When he was fifteen years old he continued his studies under the tutelage of the famous Sicilian poet Felice Bisazza.[3] He looked to a brilliant and secure career as a writer and poet but chose the religious life. When, on December 8, 1869 he was given the clerical garb, he soon began putting his talents to work and became a well received preacher. People, especially the simple and those from the lower classes, loved to listen to him because of the clarity of his sermons.

Priest of God and Servant of His People

Once his theological studies were completed he was ordained a priest on March 16, 1878. A few months before his ordination, when he was still deacon, he met a poor blind beggar, Francesco Zancone, who "providentially" led him to discover a world unknown to him: "Le Case Avignone" (The Avignone squatters), in the outskirts of Messina. It was to be his new field of apostolate. He defined this as the "spirit of a twofold charity: the evangelization of and the care for the poor". Together with the intuition of the "Rogate", this spirit of charity would be the characteristic of his life.[1]

With the blessing of his Archbishop and the encouragement Don Bosco he began an evening school for boys, a day kindergarten for girls from five to eight years old. Then, the girl's orphanage got under way and, on November 4, 1883, the boys' orphanage.[3] He placed them under the patronage of St. Anthony of Padua. Later on all his charitable institutions for poor children will be called "Anthonian Orphanages". He was concerned that in his institutions the children were provided not only with food and prepared for a job, but more importantly that they would receive a solid moral and religious education. After their elementary-grade instruction, the girls were involved in sewing, knitting, and home economics in general. He used to say: "We should love children with tender and fatherly love. This is the secret of secrets to gain them to God".

Thirteen sisters were killed in the earthquake of 1908. Although the boys dormitory collapsed none of the orphans there or at the girls residence lost their lives. Additional orphanages were opened: including one in Bari for orphans of the 1910 cholera epidemic, and one in Altamura for orphans of the First World War.[3]

The monthly periodical entitled "God and Neighbor" was first published in 1908. Having a modest format and a circulation that rose to more than half a million, it spread throughout the five continents. "God and Neighbor," the organ of all the Anthonian orphanages lasted until 1942.

With the help of those who were his most reliable collaboratores - Fr. Pantaleone Palma and Fr. Francis Vitale - he was able to lay the groundwork of his male congregation, which he named after the Rogate: The Rogationist Fathers of the Heart of Jesus. He perceived that the "Rogate" was the answer to his query. "What are these few orphans we attend to, these few people we bring the good news to, compared to the millions who are lost and abandoned as sheep without a shepherd?...I looked for an answer and I found a complete one in the words of Jesus: "Beg the harvest master to send out laborers to gather his harvest". I concluded then that I had found the secret key to all good works and to the salvation of countless souls" .[4]

Fr. Annibale decided to found his own congregation of nuns whom he called Daughters of Divine Zeal, patterned after the inspiration of the Rogate - the expression of the zeal burning in the Sacred Heart of Jesus for the glory of the Father and the salvation of souls. The Institute was given a one-year trial. During that year, he had as a cooperator for his work none other than Melanie Calvat, the famous young shepherdess to whom the Mother of God appeared on the mountain of La-Salette. Melanie remained at the Institute for one year, from September 1897 to September 1898 - a year which, in the words of Saint Hannibal, was a year of blessing. The trial period was weathered successfully, having a healthy and vigorous effect on the community, and the women's congregation was put on a safe footing.[3]

He was noted for propagating the devotion of the "Servitude of Love" taught by St. Louis of Montfort and he embodied the spirit of complete abandonment into the hands of Mary. His charity knew no bounds, and it was directed toward all those in need, including priests facing difficulties and cloistered nuns who often are forgotten by benefactors. In Messina they used to say: "This is the house of Fr. Di Francia. Have a seat and you'll get something to eat."[3] People regarded him as a Saint even when he was still alive. Mons. Angelo Paino, Bishop of Messina, later gave this testimony about him: "He was considered a Saint by all people. By this I mean people from all walks of life, social status and religious convictions". 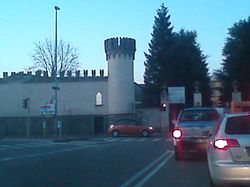 On June 1, 1927, Saint Annibal died in Messina.[5] As soon as the people heard the news of his death they began to say: "Let us go to see the sleeping saint". A few days before the Blessed Virgin Mary had appeared to him and assured him of Her protection, a vision to reward his tender devotion toward her.

Newspapers of the entire region reported with pictures and articles of the funeral and burial. Crowds of thousands came to mourn his passing away. Local authorities quickly released the permit allowing that his body be buried in the church of the "Evangelical Rogation" which Saint Hannibal himself had built in Messina. It is the only church in the world dedicated to the Gospel's passage: "Pray therefore the Lord of the Harvest". Many of his contemporaries, and among them St. Luigi Orione, requested that a formal Cause for Canonization be promptly started. But World War II put a temporary stop to the undertaking.

On April 21, 1945, the information stage of the process for Canonization began with the "Diocesan Investigations". All the writings of Saint Hannibal (62 volumes) were examined by a Special Committee of Theologians. In 1979 the Congress of Cardinals voted to begin the formal Cause for Canonization which officially began in Messina on March 8, 1980 at the same time the Eccliastical Tribunal set up a Committee of Historians.

On December 21, 1989 pope John Paul II promulgated the Decree on the "Heroic Virtues of the Servant of God".

To proceed with the Cause of Canonization, a sign of God, a miracle was needed. On June 30, 1990 the Medical Commission of the Congregation for the Causes of Saints unanimously agreed that the case of Gleida Danese - a young Brazilian girl who was doomed to die because of the rupture of the aorta but who suddenly recovered - had no possible medical explanation. Both the Commission of Theologians on July 14, 1990 and then the Congress of Cardinals and Bishops on July 27, 1990 unanimously agreed upon the miraculous recovery of the girl and found that it was to be attributed to the intercession of the Servant of God, Hannibal Di Francia.

Today the religious families founded by Saint Hannibal are present in the five continents of the world. In the spirit of their Founder, they dedicate themselves to a variety of apostolates. They work in institutions for orphans and abandoned children, schools for deaf and blind, homes for aged and pregnant girls, educational institutions and vocational schools, missions and parishes, religious printing houses and vocation centers which promote the ideals of "Rogate".

The message and the mission of Saint Hannibal is not only valued among those involved in vocation ministry and those who have at heart the formation of the clergy but also by all those who have come to understand the need of prayer for more vocations in the Church.

The need for such a prayer has been recently recognized by the Supreme Authority of the Church. Pope Paul VI on January 23, 1964 instituted the "World Day of Prayer for Vocations". Since then, every year, the Popes remind the universal Church that still today salvation comes to us through the work of many and holy ministers of the Gospel and that to obtain them from God we must pray.

On July 7, 2010 Benedict XVI blessed a marble statue of St. Annibale Maria di Francia (1851-1927), founder of the Congregation of the Rogationist Fathers of the Heart of Jesus and of the Daughters of Divine Generosity. The statue is positioned in an external niche of the Vatican Basilica near the Arch of the Bells.[2]