Hans Christian Heg (21 December 1829 – 20 September 1863) was a Norwegian-American politician and soldier in the American Civil War from Wisconsin. [1]

Heg was born at Haugestad in the community of Lierbyen in Lier, Buskerud, Norway on December 21, 1829. He was the eldest of the four children of an innkeeper. His father, Even Hansen Heg (1790–1850), moved his family to America in 1840, settling in the Muskego Settlement in Wisconsin. Hans Heg was eleven years old when his family arrived in Muskego. He soon earned a reputation for himself as being a gifted boy.[2]

At twenty years old, lured by the discovery of gold in the Sacramento Valley, he and three friends joined the army of "Forty-Niners". He spent the next two years prospecting for gold in California. Upon the death of his father, he returned to the Muskego area in 1851. He married Gunhild Einong, daughter of a Norwegian immigrant.

Heg became a rising young politician who found slavery abhorrent. He naturally became an ardent member of the Free Soil Party.[3] Heg was a major in the 4th Wisconsin Militia and served as Wisconsin State Prison Commissioner. He was the first Norwegian-born candidate elected statewide in Wisconsin.

He soon joined the recently formed Republican Party. He was an outspoken anti-slavery activist and a leader of Wisconsin's Wide Awakes, an anti-slave catcher militia.[4][5] During this time, he sheltered Sherman Booth, who was made a federal fugitive after inciting a mob to rescue an escaped slave.

With the outbreak of the Civil War, Heg was appointed by Governor Alexander Randall as colonel of the 15th Wisconsin Volunteer Regiment. Appealing to all young "Norsemen," he said, "the government of our adopted country is in danger. It is our duty as brave and intelligent citizens to extend our hands in defense of the cause of our Country and of our homes."[6] The 15th Wisconsin was called the Scandinavian Regiment since its soldiers were almost all immigrants from Norway, with some from Denmark and Sweden. It was the only all Scandinavian regiment in the Union Army. On 8 October 1862, Colonel Heg led his regiment into its first action at the Battle of Perryville. Despite being under fire while being driven back several miles by the enemy, the 15th Wisconsin suffered few casualties and no fatalities. However, one of those hurt was Colonel Heg, who was injured when his horse fell.

Heg commanded the regiment during the Battle of Stones River. In response to his conduct at Stones River, Maj. Gen. William Rosecrans placed Colonel Heg in command of the newly formed 3rd Brigade of the 1st Division, XX Corps, Army of the Cumberland, on 1 May 1863.

On 19 September 1863, Colonel Heg led his brigade at the Battle of Chickamauga, where he was mortally wounded. Heg "was shot through the bowels and died the next day." [7] Upon hearing of Heg's death, Rosecrans expressed regret, saying he had intended to promote Heg to brigadier general. As it was, Colonel Heg was the highest-ranked Wisconsin soldier killed in combat during the Civil War.

Heg was buried at the Norway Lutheran Church Cemetery near Wind Lake, Wisconsin.[8] 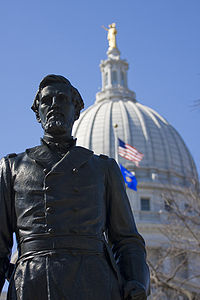