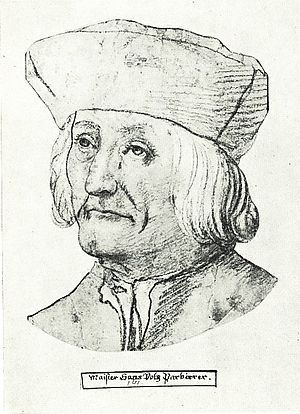 Hans Folz (c. 1437 – January 1513) was a German author of the late medieval or early Renaissance period.

Folz was born in Worms. He was made a citizen of the city of Nuremberg, Germany in 1459 and master barber of the city in 1486. Folz was a reformer of the meistersangs, adding 27 new tones to those that had been allowed by the twelve "Alten Meister" (old masters) up to that point. His Meisterlieder (a type of song), of which he wrote about a thousand, were mostly devoted to religious questions. He also wrote twelve Fastnachtsspiele (short plays that made light of people in medieval society, for instance farmers, priests, and the bourgeoisie) in the same style as Hans Rosenplüt, but with more subtle language.

Folz has been labelled as an anti-semite by Andrew Gow, who called him "a thorough-going Jew-hater" for his work Ein Spil von dem Herzogen von Burgund (A Story of the Dukes of Burgund).[1]

According to Albert Wimmer's Anthology of Medieval German Literature, "Folz's plays were trendsetters in the development of moderately dramatic plays (so-called «Handlungsspiele»)".[2].

His name was adapted by Richard Wagner for the coppersmith "Hans Foltz," one of the Mastersingers portrayed in the opera Die Meistersinger von Nürnberg.