From Infogalactic: the planetary knowledge core
Jump to: navigation, search
Not to be confused with Hans-Hermann Hoppe.
File:Porsche RS61-8zyl -H. Herrmann 19620527.jpg
Hans Herrmann driving RS 61 at the Nürburgring 1962
File:1965-05-23 Hans Herrmann vor dem Start.jpg
Hans Herrmann before the start of the 1965 1000km Nürburgring, behind him the Fiat Abarth 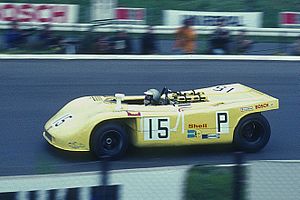 In F1, he participated in 19 World Championship Grands Prix, debuting on August 2, 1953. He achieved 1 podium, and scored a total of 10 championship points.

In Sports car racing, he also scored the first overall win at the 24 Hours of Le Mans for Porsche in 1970, in a Porsche 917.

The racing career of Herrmann, who is a baker by trade, spans from cooperation with pre-war legends like Alfred Neubauer to the beginning of the dominance of Porsche at the 24 Hours of Le Mans. He took part in now legendary road races like Mille Miglia, Targa Florio and Carrera Panamericana and is one of the few remaining witnesses of this era. Hans im Glück (lucky John) escaped from several spectacular incidents or accidents.

Herrmann had a remarkable Mille Miglia race in 1954, when the gates of a railroad crossing were lowered in the last moment before the fast train to Rome passed. Driving a very low Porsche 550 Spyder, Herrmann decided it was too late for a brake attempt anyway, knocked on the back of the helmet of his navigator Herbert Linge to make him duck, and they barely passed below the gates and before the train, to the surprise of the spectators.

From 1954 to 1955, he was part of the Mercedes-Benz factory team, as a junior driver behind Juan Manuel Fangio, Karl Kling, Hermann Lang and later Stirling Moss. When the Silver Arrows came back for the 1954 French Grand Prix to score a 1–2 win, Herrmann drove the fastest lap but had to retire. A podium finish at the 1954 Swiss Grand Prix was his best result in that year as he had to use older versions of the Mercedes-Benz W196, or the least reliable car.

In the 1955 Argentine Grand Prix his team mates Kling and Moss had to abandon early due to the extremely hot conditions on the southern hemisphere in January. Herrmann was called in to share his car with them for a 4th place finish, giving one point each. Fangio won with two laps more. Hans was quick in the 1955 Mille Miglia with the Mercedes-Benz 300 SLR, comparably or even faster than Moss, but was less lucky than in 1954, as he had to abandon the race.

A crash in practise for the 1955 Monaco Grand Prix put Herrmann out for the ill-fated 1955 season, even though a comeback in the Targa Florio was intended.

The next years saw Herrmann racing for many marques, in F1 for Cooper, Maserati and BRM. In Berlin's AVUS during the 1959 German Grand Prix the brakes of his BRM failed, he crashed in a spectacular way, being thrown out of the car and sliding along the track with the car somersaulting in the air.

With different versions of the Porsche 718 being used as a sportscar and as a Formula Two car, Herrmann scored some wins for Porsche, mainly both the 1960 12 Hours of Sebring and Targa Florio. When the open wheeled single seater version of the Porsche 718 became eligible for Formula One in 1961 due to the rule changes, the results in F1 were disappointing. Herrmann finished 15th (last) in the 1961 Dutch Grand Prix, which was one of only two races in F1 history to have no retirements. He left Porsche at the beginning of the 1962 season feeling that he as a local from Stuttgart was No Prophet In His Own Land compared to Californian Dan Gurney and 1959 GP-winner Jo Bonnier from Sweden. Gurney scored two F1 wins (one non-championship) with the new Porsche 804, but Porsche retired from F1 anyway at the end of 1962.

With the small cars of the Italian Abarth marque Herrmann spent 1962 to 1965 driving in minor races and hillclimbing events. He only took outright wins in lesser sports car racing events, such as at AVUS or the 500 km Nürburgring. The Abarths were hard to beat in their classes from 850cc to 1600cc, though. Being the only pro in a small team Hermann learned a lot about testing and developing, which helped him later. However, being dissatisfied with the preparation of his car for the 1965 Schauinsland practice, Hans went home to witness the birth of his son, Dino. At the end of the year he left Abarth for good to return to the manufacturer closer to his home.

In 1966 he returned to Porsche for a comeback in the World Sportscar Championship, as Porsche started a serious effort there. Following several podium finishes with the still underpowered two liter Porsche 906 and later models, he won the 1968 24 Hours of Daytona in a 907 as well as the Sebring 12 Hours again, now together with Swiss Jo Siffert. The overall win of the 1000km Nürburgring always eluded him, even though Herrmann had taken part in each of these races at the Nürburgring since they were introduced in 1953, and had finished second three times in a row from 1968 to 1970, behind team mates Jo Siffert and/or Vic Elford.

Herrmann missed the win in the 1969 24 Hours of Le Mans with a Porsche 908 by only 120 meters [1], but it was he who finally scored the long-awaited first overall victory at the Le Mans 24 Hours for Porsche in 1970. He was assigned to Porsche Salzburg, the Austria-based factory-backed team owned by the Porsche family, which mainly entered cars painted red and white, the Austrian colors. In heavy rain, he and his team mate Richard Attwood survived with their Porsche 917K #23 as the best of only seven finishers.

Half jokingly, he had promised to his wife before the Le Mans race that he would retire in case of a win there. Having witnessed fatal accidents of colleagues too many times, e.g. before the 1969 German Grand Prix when his team mate and neighbor Gerhard Mitter died, the 42-year-old announced his retirement on TV, after having driven the winning car in a parade through Stuttgart from the factory to the town hall. To get out of his contract with Porsche Salzburg, Herrmann had to recommend a replacement driver to Luise Piech.

Using his contacts, Herrmann built a successful company for automotive supplies. He was kidnapped once in the 1990s and kept in a car trunk for many hours before escaping.

Hans, e.g. at age 75 at the 2003 Solitude revival, still drives his old race cars at meetings, with a big smile in the open-face helmet, and a heavy right foot.