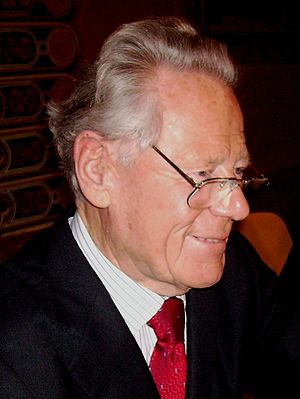 Hans Küng (pronounced [ˈhans ˈkʏŋ]; born 19 March 1928) is a Swiss Catholic priest, theologian, and author. Since 1995 he has been President of the Foundation for a Global Ethic (Stiftung Weltethos). He is notable for his rejection of the doctrine of papal infallibility. [1] Although Küng is not officially allowed to teach Catholic theology,[2] his priestly faculties have not been revoked.[3] In 1979, he had to leave the Catholic faculty, but remained at the University of Tübingen as a professor of ecumenical theology, serving as an emeritus professor since 1996.

Küng was born in Sursee, Canton of Lucerne. He studied philosophy and theology at the Pontifical Gregorian University in Rome and was ordained in 1954. He continued his education in various European cities, including the Sorbonne.

In 1960, he was appointed professor of theology at Eberhard Karls university, Tübingen, Germany. Like his colleague Joseph Ratzinger (later Pope Benedict XVI), in 1962 he was appointed peritus by Pope John XXIII, serving as an expert theological advisor to members of the Second Vatican Council until its conclusion in 1965. At Küng's instigation, the Catholic faculty at Tübingen appointed Ratzinger as professor of dogmatic theology.[4]

In a 1963 tour of the United States, Küng gave the lecture "The Church and Freedom", receiving an interdict from The Catholic University of America but an honorary doctorate from St. Louis University. He accepted an invitation to visit John F. Kennedy at the White House.[5]

Küng's doctoral thesis, "Justification. La doctrine de Karl Barth et une réflexion catholique", was finally published in English in 1964 as Justification: The Doctrine of Karl Barth. It located a number of areas of agreement between Barthian and Catholic theologies of justification, concluding that the differences were not fundamental and did not warrant a division in the Church. (The book included a letter from Karl Barth attesting that he agreed with Küng's representation of his theology.) In this book Küng argued that Barth, like Martin Luther, overreacted against the Catholic Church which, despite its imperfections, has been and remains the body of Christ.[6]

In the late 1960s, he became the first major Roman Catholic theologian since the late 19th century Old Catholic Church schism to publicly reject the doctrine of papal infallibility, in particular in his book Infallible? An Inquiry (1971). Consequently, on 18 December 1979, he was stripped of his missio canonica, his licence to teach as a Roman Catholic theologian, but carried on teaching as a tenured professor of ecumenical theology at the University of Tübingen until his retirement (Emeritierung) in 1996.

For three months in 1981, he was guest professor at the University of Chicago. During this visit to America he was invited to only one Catholic institution, the University of Notre Dame. He appeared on the Phil Donahue Show.[7] In October 1986, he participated in the Third Buddhist-Christian Theological Encounter held at Purdue University, West Lafayette, Indiana.[8]

In the early 1990s, Küng initiated a project called Weltethos ("Global Ethic"), which is an attempt at describing what the world's religions have in common (rather than what separates them) and at drawing up a minimal code of rules of behaviour everyone can accept. His vision of a global ethic was embodied in the document for which he wrote the initial draft, Towards a Global Ethic: An Initial Declaration. This Declaration was signed at the 1993 Parliament of the World's Religions by religious and spiritual leaders from around the world. Later Küng's project would culminate in the UN's Dialogue Among Civilizations to which Küng was assigned as one of 19 "eminent persons." Even though it was completed shortly after the terrorist attacks of 9/11 (in September 2001), it was not covered in the U.S. media, about which Küng complained.[9][10][11]

In March 1991, he gave a talk titled "No Peace Among Nations until Peace Among the Religions" at UCSD's Price Center. He visited the nearby Beth El synagogue and spoke there on modern German-Jewish relations.[12]

In 1998, he published Dying with Dignity, co-written with Walter Jens, in which he affirms acceptance of euthanasia from a Christian viewpoint.

In 2003, Küng saw the beatification of Pope Pius IX as evidence of the degeneration of canonizations to "gestures of church politics".[13]

In 2005, Küng published a critical article in Italy and Germany on "The failures of Pope Wojtyla" in which he argued that the world had expected a period of conversion, reform, and dialogue but, instead, John Paul II offered a restoration of the pre-Vatican II status quo—thus blocking reform and inter-church dialogue and reasserting the absolute dominion of Rome.

On 26 September 2005, he had a friendly discussion about Catholic theology over dinner with Pope Benedict XVI, surprising some observers.[14]

Nevertheless, in a 2009 interview with Le Monde, Küng deeply criticised the lifting of the excommunications on the bishops of the Society of Saint Pius X. The interview drew a rebuke from Cardinal Angelo Sodano.[15]

Based on Studium Generale lectures at Tübingen University, his latest publication, Der Anfang aller Dinge (The beginning of all things), discusses the relationship between science and religion. In an analysis spanning from quantum physics to neuroscience, he comments on the current debate about evolution in the United States, dismissing those opposed to the teaching of evolution as "naive [and] un-enlightened."[citation needed]

In his 2010 book Was ich glaube, he describes his own personal relationship with nature, how he learned to observe correctly, drawing strength from God's creation without falling victim to a false and fanatic love of nature.

In April 2010, he published in several newspapers an open letter[16] to all Catholic bishops. In the letter he criticized Pope Benedict's handling of liturgical, collegial and inter-religious issues and also the sexual abuse scandals in the Catholic Church. In the letter, he called on bishops to consider six proposals, ranging from speaking up and working on regional solutions to calling for another Vatican council.

He is a signatary of Church 2011, a German-language memorandum promulgated by Catholic theology professors.[17]

In 2013, Küng wrote in Erlebte Menschlichkeit ("Experienced Humanity") that he believed people had the right to end their own lives if physical illness, pain, or dementia made living unbearable. He further wrote that he was considering the option of assisted suicide for himself as he was suffering from Parkinson's Disease and was losing the ability to see and write with his hands. Küng wrote that he did not wish to follow the example of John Paul II in this case.[18]