Hans Heinrich Lammers (27 May 1879 – 4 January 1962) was a German jurist and prominent Nazi politician. From 1933 until 1945 he served as head of the Reich Chancellery under Adolf Hitler.

Born in Lublinitz (Lubliniec) in Upper Silesia, the son of a veterinarian, Lammers completed law school at the universities of Breslau (Wrocław) and Heidelberg, obtained his doctorate in 1904, and was appointed judge at the Amtsgericht of Beuthen (Bytom) in 1912. During World War I, as a volunteer and officer of the German Army, he received the Iron Cross, First and Second Class. After World War I he joined the national conservative German National People's Party (DNVP) and resumed his career as a lawyer reaching by 1922 the position of undersecretary at the Reich Ministry of the Interior.[1]

In 1932, Lammers joined the Nazi Party and achieved rapid promotions: he was appointed head of the police department, and, after the Nazi seizure of power in 1933 State Secretary and Chief of the Reich Chancellery.[2] At the recommendation of Reich Minister Wilhelm Frick, he became the centre of communications and chief legal adviser for all government departments. From 1937, he was a member of Hitler's cabinet as a Reich Minister without portfolio, and from 30 November 1939 a member of the Council of Ministers for the Defence of the Reich.[3] In this position he was able to review all pertinent documents regarding national security and domestic policy even before they were forwarded to Hitler in person. Historian Martin Kitchen explains that due to the centralization of power accorded to the Reich Chancellory and therefore to its head, Lammers became "one of the most important men in Nazi Germany".[4] From the vantage point of most government officers, Lammers seemed to speak on behalf of Hitler, the ultimate authority within the Reich. Lammers was also one of the first officials to sign government correspondence with "Heil Hitler", which became a requisite greeting for civil servants and eventually so ubiquitous that failure to use it was considered an "overt sign of dissidence" triggering Gestapo's attention.[5] Sometime in 1940, Lammers was also promoted to honorary SS General.[6]

From January 1943, Lammers served as President of the cabinet when Hitler was absent from their meetings. Along with Martin Bormann, he increasingly controlled access to Hitler. In February 1943, following the Battle of Stalingrad, Bormann with Lammers attempted to create a three-men junta representing the Nazi Party (Bormann), the State (Lammers), and the Army (Field Marshal Wilhelm Keitel, chief of the OKW). This Committee of Three would have exercised dictatorial powers over the home front. Joseph Goebbels, Albert Speer, Hermann Göring and Heinrich Himmler all saw this proposal as a power grab by Bormann and Lammers and a threat to their positions, and combined to block it. However, this scheme eventually collapsed due to the frequent infighting and mistrust the party, military, and the various ministries had amongst one another. Lammers eventually lost power and influence due to the increasing irrelevancies of his position due to the war and as a consequence of Martin Bormann's growing influence with Hitler.[7] 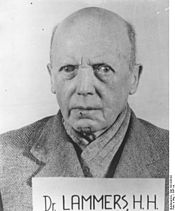 Lammers in 1947 facing trial for crimes against humanity

In April 1945, Lammers was arrested by SS troops during the final days of the Third Reich, in connection with the upheaval surrounding Hermann Göring. On 23 April, as the Soviets tightened the encirclement of Berlin, Göring consulted Karl Koller and Lammers. All agreed that Göring was not only Hitler's designated successor, but was to act as his deputy if Hitler ever became incapacitated. Acting on the matter, Göring sent a telegram from Berchtesgaden, Bavaria, arguing that since Hitler was cut off in Berlin, he, Göring, should assume leadership of Germany. Göring set a time limit, after which he would consider Hitler incapacitated. Hitler responded angrily, ordering SS troops to arrest Göring and to shoot Lammers.[8] Lammers was rescued when he was captured by American forces, but in the meanwhile his wife, Elfriede (née Tepel), committed suicide near Obersalzberg (the site of Hitler's mountain retreat) in early May 1945, as did his younger daughter, Ilse, two days later.[9]

After the war in April 1946 Lammers was a witness at the Nuremberg tribunal. In April 1949 he was tried in the Ministries Trial, one of the Subsequent Nuremberg Trials, and sentenced to 20 years in prison. The sentence was later reduced to 10 years by U.S. High Commissioner John J. McCloy, and on 16 December 1951, he was released from prison at Landsberg am Lech with his sentence declared as served.[10] He died on 4 January 1962 in Düsseldorf, and was buried in Berchtesgaden in the same plot as his wife and daughter.