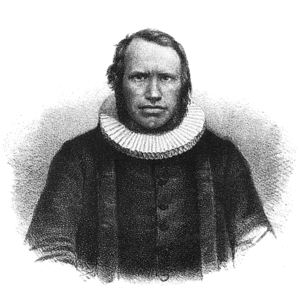 Hans Paludan Smith Schreuder (18 June 1817 - 27 June 1882) was a 19th century Norwegian missionary who developed a close relationship with both the Zulu and British authorities.[1]

Hans Paludan Smith Schreuder was born in Sogndal in Sogn og Fjordane, Norway in 1817. As a theological student, he was very interested in missionary work, and wrote a treatise entitled A Few Words to the Church of Norway on Christian Obligation to be Concerned about the Salvation of Non-Christian Fellow Men. Unlike other missionaries who describe their missionary work as a "calling", Schreuder saw it more as a "duty".[2]

In 1842 the Norwegian Missionary Society was created. Schreuder became its first missionary, arriving in Port Natal (now Durban, South Africa) on New Year's Day 1844. He then made his way north of the Tugela River on the advice of a fellow missionary, Robert Moffat. Schreuder became the first permanent missionary in KwaZulu, the kingdom of the Zulus. Starting in the early 1850s, Schreuder managed to start twelve missionary stations. The first baptism took place in 1858. His success was limited in respect to gaining converts, however; at no time in his life did the number exceed 300. Nevertheless, he was consecrated 'Bishop of the Mission Field of the Church of Norway' in 1866.[3]

In his many years in Kwa Zulu, Schreuder became very fluent in their language. He is responsible for authoring the very first complete grammar of the Zulu language. His scholarship ranged beyond linguistics and theology; he became a student of the Zulu culture and history, as well as an expert in the wealth of plant and animal life in the area.[4]

Because of Schreuder's friendship with the Zulu King Mpande, and also because of the trust placed in him by the British, Schreuder was able on several occasions to remove misunderstandings and prevent clashes between the two nations. Under Cetshwayo, Mpande's son and successor, relations became more strained. Cetshwayo wanted the missionaries to leave his country. On the other hand, he also desired British recognition of himself as the rightful leader of his people. Cetshwayo therefore sought the advice of Schreuder, who agreed to approach the government of Natal in the matter. As a result of Schrueder's aid, in 1873 Cetshwayo was formally installed as king of the Zulus. An important part of the ceremony was the full assent given by the king to the introduction of new laws, the first of which was that the indiscriminate shedding of blood should cease.[5]

In the years following Cetshwayo's installation, Schreuder acted as an intermediary between the Zulu king and the British authorities in Natal. In the war that eventually broke out he offered his services, in the interest of peace, to Zulus and British alike. Sir Garnet Wolseley, commander-in-chief of the British forces during the Anglo-Zulu War, reportedly wanted him to act as a spy for the British, however Schreuder refused. [6]

Although Schreuder was twice married, he had no children. Bishop Hans P. S. Schreuder died in 1882, in Natal Province, South Africa. [7]