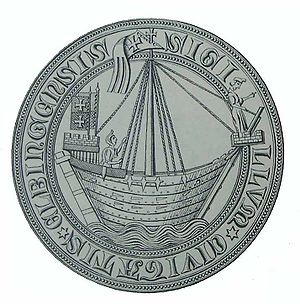 Hanseatic flags are the banners of Hanseatic cities, that were flown by cogs and other ships of the Hanseatic league - as illustrated on the 1350 seal of Elbing shown here.

Originally, Hanseatic ships displayed red gonfalones on their masts, which had a cross at its peak to denote the protection of the sovereign. Red was also the colour used by Danish and English shipping, the English later adopting the St George's Cross. From the second half of the 13th century, the individual Hanseatic cities created various banners to distinguish themselves from other member cities. The red gonfalone remained in use in addition to these flags. The oldest Hanseatic flag is the plain red banner used by Hamburg. Hanseatic flags were mostly red-white and some featured symbols, such as crosses.

Many cities that were members of the Hanseatic league continue to use red and white as their city colours today.

In addition to these banners, ships also flew a Hanseatic pennant (Hanseatenwimpel) where the upper half is white (silver) and the lower half is red.

Other seals and coins