In human genetics, Haplogroup I-M253 is a Y chromosome haplogroup which occurs at greatest frequency in Fenno-Scandia. The mutations identified with Haplogroup I-M253 (Y-DNA) are M253, M307, P30, and P40. These are known as single nucleotide polymorphisms (SNPs). It is a subclade of Haplogroup I. Before a reclassification in 2008,[2] the group was known as Haplogroup I1a.

The group displays a very clear frequency gradient, with a peak of approximately 40 percent among the populations of western Finland and more than 50 percent in the province of Satakunta,[3] and around 38 percent in Sweden as a whole, with a peak of 52 percent in Västra Götaland County in central Sweden.[4]

Haplogroup I-M253 arose from haplogroup I-M170, which appears ancient in Europe. The haplogroup was previously[year needed] thought to have originated 15,000 years ago in Iberia, but as of 2010 it was estimated to have originated between 4,000 - 5,000 years ago, in Chalcolithic Europe.[5] A new study in 2015 estimated the origin as between 3,470 to 5,070 years ago or between 3,180 to 3,760 years ago, using two different techniques.[6] It is suggested that it initially dispersed from the area that is now Denmark.[7] A 2014 study in Hungary uncovered remains of nine individuals from the Linear Pottery culture, one of whom was found to have carried the M253 SNP which defines Haplogroup I1. This culture is thought to have been present between 6,500 to 7,500 years ago.[1]

Note: The systematic subclade names have changed several times in recent years,[year needed] and are likely to change again, as new markers which clarify the sequence of branchings of the tree are discovered.[8]

I-M253 is found at its highest density in Northern Europe and other countries that experienced extensive migration from Northern Europe, either in the Migration Period, the Viking period or modern times. It is found in all places invaded by the ancient Germanic peoples and the Vikings. In the modern era, significant I-M253 populations have also taken root in immigrant nations and former European colonies such as United States, Australia and Canada.

There are several public access databases where I-M253 populations can be found:

Map showing the distribution of Y chromosomes in a trans section of England and Wales from the paper "Y Chromosome Evidence for Anglo-Saxon Mass Migration". The authors attribute the differences in frequencies of haplogroup I to Anglo-Saxon mass migration into England, but not into Wales.

In 2002 a paper was published by Michael E. Weale and colleagues showing genetic evidence for population differences between the English and Welsh populations, including a markedly higher level of Y-DNA haplogroup I in England than in Wales. They saw this as convincing evidence of Anglo-Saxon mass invasion of eastern Great Britain from northern Germany and Denmark during the Migration Period.[11] The authors assumed that populations with large proportions of haplogroup I originated from northern Germany or southern Scandinavia, particularly Denmark, and that their ancestors had migrated across the North Sea with Anglo-Saxon migrations and Danish Vikings. The main claim by the researchers was

that an Anglo-Saxon immigration event affecting 50–100% of the Central English male gene pool at that time is required. We note, however, that our data do not allow us to distinguish an event that simply added to the indigenous Central English male gene pool from one where indigenous males were displaced elsewhere or one where indigenous males were reduced in number … This study shows that the Welsh border was more of a genetic barrier to Anglo-Saxon Y chromosome gene flow than the North Sea … These results indicate that a political boundary can be more important than a geophysical one in population genetic structuring.

In 2003 a paper was published by Christian Capelli and colleagues which supported, but modified, the conclusions of Weale and colleagues.[12] This paper, which sampled Great Britain and Ireland on a grid, found a smaller difference between Welsh and English samples, with a gradual decrease in Haplogroup I frequency moving westwards in southern Great Britain. The results suggested to the authors that Norwegian Vikings invaders had heavily influenced the northern area of the British Isles, but that both English and mainland Scottish samples all have German/Danish influence.

See also: List of haplogroups of historical and famous figures

Alexander Hamilton, through genealogy and the testing of his descendants (assuming actual paternity matching his genealogy), has been placed within Y-DNA haplogroup I-M253.[13] 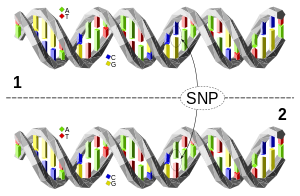 DNA example: strand 1 differs from strand 2 at a single base pair location (a C >> T polymorphism).

The following are the technical specifications for known I-M253 haplogroup SNP and STR mutations.