I-M170 is one of the most numerous haplogroups among European males.[1] Subclades can be found in most present-day European populations, with peaks in some Northern European and South East European countries. Consequently, I-M170 represents up to one-fifth of the male population of Europe, being the continent's second major Y-DNA haplogroup (behind Haplogroup R).

The haplogroup reaches its maximum frequency in the Balkans (with the highest concentration in present-day Herzegovina). It may be associated with unusually tall males, since those in the Dinaric Alps have been reported to be the tallest in the world, with an average height of 185.6 cm (6 ft 1.1 in),[2] and close to 190 cm (6 ft 3 in).[3]

While a European point of origin has often been proposed – as I-M170 has not found outside Europe in Paleolithic remains – the modern populations with the greatest proportions of basal, undiverged I* are found in the Caucasus and Iran. These include the Darginians (Dargwa) and North Ossetians of the North Caucasus,[4] and ethnic Iranians from Tehran and Isfahan.[5]

In addition, living examples of the precursor Haplogroup IJ* have been found only in Iran, among the Mazandarani and ethnic Persians from Fars.[6] This may indicate that IJ originated in South West Asia. 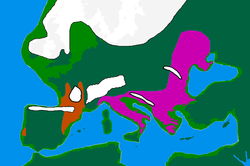 Semino (2000) speculated that the initial dispersion of this population corresponds to the diffusion of the Gravettian culture.[11] Later the haplogroup, along with two cases of Haplogroup C, was found on human remains belonging to the culture and on individuals of the Magdalenian and Azilian cultures.[12] Rootsi and colleagues in 2004 suggested that each of the ancestral populations now dominated by a particular subclade of Haplogroup I-M170 experienced an independent population expansion immediately after the last glacial maximum.[9]

The five known cases of Haplogroup I from Paleolithic European human remains make it the most frequent haplogroup from that period.[12] In 2016, the 31,210–34,580 year old remains of a hunter-gatherer from Paglicci Cave, Apulia, Italy were found to carry I-M170.[13] So far, only Haplogroup F* and Haplogroup C1b have been documented, once each, on older remains in Europe. I-M170 is the main haplogroup found on male remains in Mesolithic Europe, until circa 6,000 BCE.

The earliest documentation of I1 is from Neolithic Hungary, although it must have separated from I2 at an earlier point in time.

In one instance, haplogroup I was found far from Europe, among 2,000 year old remains from Mongolia.[14]

As of 2015 researches, the earliest light eyes and light hair of hominid (Homo Sapiens) individuals after the long extinct Neandarthals have been documented at 8,000 years old remains in Motala, Sweden, belonging to subclades of Haplogroup I2 and mitochondrial Haplogroup U5.[15][16][17] An I2a1 carrier was a carrier of red hair and others of genes of blond/light hair, while all the Motala hunter-gatherers were light skinned and blue eyed males. (Light skin genes, but not those for blonde/red hair have been found in: Siberia on a 17,000 year-old carrier of Haplogroup R*, as well as 8,000–9,000 year-old R1a remains from Karelia.)

It would seem to be that separate waves of population movement impacted Southeastern Europe. The role of the Balkans as a long-standing corridor to Europe from Anatolia and/or the Caucasus is shown by the common phylogenetic origins of both haplogroups I and J in the parent haplogroup IJ (M429). This common ancestry suggests that the subclades of IJ entered the Balkans from Anatolia or the Caucasus, some time before the Last Glacial Maximum. I and J were subsequently distributed in Asia and Europe in a disjunctive phylogeographic pattern typical of "sibling" haplogroups. A natural geographical corridor like the Balkans is likely to have been used later by members of other subclades of IJ, as well as other haplogroups, including those associated with Early European Farmers.

Frequencies of Haplogroup I:

The subclades of Haplogroup I-M170 with their defining mutations:[84]

Note that the naming of some of the subgroups has changed, as new markers have been identified, and the sequence of mutations has become clearer..

The composite subclade I-M170 contains individuals directly descended from the earliest members of Haplogroup I, bearing none of the subsequent mutations which identify the remaining named subclades.

Several I* individuals, who do not fall into any known subclades, have been found among the Lak people of Dagestan, at a rate of (3/21),[87] as well as Turkey (8/741), Adygea in the Caucasus (2/138) and Iraq (1/176), even though I-M170 occurs at only very low frequencies among modern populations of these regions as a whole. This is consistent with the belief that the haplogroup first appeared in South West Eurasia.

(Neither study from which the above figures were drawn excluded the present I2-M438 clade as a whole, but only certain subclades, so these presumed cases I* may possibly belong to I2.)

Haplogroup I1-M253 (M253, M307, P30, P40) displays a very clear frequency gradient, with a peak frequency of approximately 35% among the populations of southern Norway, southwestern Sweden, and Denmark, and rapidly decreasing frequencies toward the edges of the historically Germanic-influenced world. A notable exception is Finland, where frequency in West Finns is up to 40%, and in certain provinces like Satakunta more than 50%.

Haplogroup I2a1a-M26 is notable for its strong presence in Sardinia. Haplogroup I-M170 comprises approximately 40% of all patrilines among the Sardinians, and I2a1a-M26 is the predominant type of I among them.

Haplogroup I2a1a-M26 is practically absent east of France and Italy,[90] while it is found at low but significant frequencies outside of Sardinia in the Balearic Islands, Castile-León, the Basque Country, the Pyrenees, southern and western France, and parts of the Maghreb in North Africa, Great Britain, and Ireland. Haplogroup I2a1a-M26 appears to be the only subclade of Haplogroup I-M170 found among the Basques, but appears to be found at somewhat higher frequencies among the general populations of Castile-León in Spain and Béarn in France than among the population of ethnic Basques.[citation needed] The M26 mutation is found in native males inhabiting every geographic region where megaliths may be found, including such far-flung and culturally disconnected regions as the Canary Islands, the Balearic Isles, Corsica, Ireland, and Sweden.[90]

The distribution of I2a1a-M26 also mirrors that of the Atlantic Bronze Age cultures, which indicates a potential spread via the obsidian trade or a regular maritime exchange of some of metallurgical products.[90]

Haplogroup I2a1b-M423 is the most frequent Y-chromosome Haplogroup I-M170 in Central and Eastern European populations, reaching its peak in the Western Balkans, most notably in Dalmatia (50-60%[30]) and Bosnia-Herzegovina (up to 71%,[91] avg. 40-50%[30]). A greater variance of this group has been found in Ireland and Great Britain, but overall frequency is very low (2-3%). Haplogroup I2a1b-M423 is virtually absent in Fennoscandia, Western and Southwestern Europe.

The distribution of Haplogroup I2a2-M436 (M436/P214/S33, P216/S30, P217/S23, P218/S32) is closely correlated to that of Haplogroup I1 except in Fennoscandia, which suggests that it was probably harbored by at least one of the Paleolithic refuge populations that also harbored Haplogroup I1-M253; the lack of correlation between the distributions of I1-M253 and I2a2-M436 in Fennoscandia may be a result of Haplogroup I2a2-M436's being more strongly affected in the earliest settlement of this region by founder effects and genetic drift due to its rarity, as Haplogroup I2a2-M436 comprises less than 10% of the total Y-chromosome diversity of all populations outside of Lower Saxony. Haplogroup I2a2-M436 has been found in over 4% of the population only in Germany, the Netherlands, Belgium, Denmark, England (not including Cornwall), Scotland, and the southern tips of Sweden and Norway in Northwest Europe; the provinces of Normandy, Maine, Anjou, and Perche in northwestern France; the province of Provence in southeastern France; the regions of Tuscany, Umbria, and Latium in Italy; and Moldavia and the area around Russia's Ryazan Oblast and Republic of Mordovia in Eastern Europe. One subclade of Haplogroup I2a2-M436, namely I2a2a1a1-M284, has been found almost exclusively among the population of Great Britain, which has been taken to suggest that the clade may have a very long history in that island. It is notable, however, that the distributions of Haplogroup I1-M253 and Haplogroup I2a2-M436 seem to correlate fairly well with the extent of historical influence of Germanic peoples. The punctual presence of both haplogroups at a low frequency in the area of the historical regions of Bithynia and Galatia in Turkey may be related to the Varangian Guard or rather suggests a connection with the ancient Gauls of Thrace, several tribes of which are recorded to have immigrated to those parts of Anatolia at the invitation of Nicomedes I of Bithynia. This suggestion is supported by recent genetic studies regarding Y-DNA Haplogroup I2b2-L38 have concluded that there was some Late Iron Age migration of Celtic La Tène people, through Belgium, to the British Isles including north-east Ireland.[92]

Haplogroup I2a2-M436 also occurs among approximately 1% of Sardinians, and in Hazaras from Afghanistan at 3%.[93]

The technical details of U179 are: