All mtDNA haplogroups considered native outside of Africa are descendants of either haplogroup M or its sibling haplogroup N.[9] The geographical distributions of M and N are associated with discussions concerning out of Africa migrations and the subsequent colonization of the rest of the world. In particular, it is often taken to indicate that it is very likely that there was one particularly major prehistoric migration of humans out of Africa, and that both M and N were part of this colonization process.[10]

There is a debate concerning geographical origins of Haplogroup M and its sibling haplogroup N. Both lineages are thought to have been the main surviving lineages involved in the out of Africa migration (or migrations) because all indigenous lineages found outside Africa belong to haplogroup M or haplogroup N. Yet to be conclusively determined is whether the mutations that define haplogroups M and N occurred in Africa before the exit from Africa or in Asia after the exit from Africa. Determining the origins of haplogroup M is further complicated by the fact that it is found in Africa and outside of Africa.[3]

It is generally accepted that haplogroup M evolved shortly after the emergence of its parent clade haplogroup L3. Apart from haplogroup M and its sibling haplogroup N, the numerous other subclades of L3 are largely restricted to Africa, which suggests that L3 arose in Africa.

Much of discussion concerning the origins of haplogroup M has been related to its subclade haplogroup M1, which is the only variant of macrohaplogroup M found in Africa.[9] Two possibilities were being considered as potential explanations for the presence of M1 in Africa:

In 2009, two independent publications reported a rare, deep-rooted subclade of haplogroup M, referred to as M23, that is present in Madagascar.[12][13] The contemporary populations of Madagascar were formed in the last 2,000 years by the admixture of African and Southeast Asian (Austronesian) populations. M23 seems to be restricted to Madagascar as it was not detected anywhere else. M23 could have been brought to Madagascar from Asia where most deep rooted subclades of Haplogroup M are found.

According to this theory, haplogroups M and N arose from L3 in an East African population that had been isolated from other African populations. Members of this population were involved in the out Africa migration and only carried M and N lineages. With the possible exception of haplogroup M1, all other M and N clades in Africa were lost by genetic drift.[6][11]

The African origin of Haplogroup M is supported by the following arguments and evidence.

A number of studies have proposed that the ancestors of modern haplogroup M dispersed from Africa through the southern route across the Horn of Africa along the coastal regions of Asia onwards to New Guinea and Australia. These studies suggested that the migrations of haplogroups M and N occurred separately with haplogroup N heading northwards from East Africa to the Levant. However, the results of numerous recent studies indicate that there was only one migration out of Africa and that haplogroups M and N were part of the same migration. This is based on the analysis of a number of relict populations along the proposed beachcombing route from Africa to Australia, all of which possessed both haplogroups N and M.[2][19]

A 2008 study by Abu-Amero et al., suggests that the Arabian Peninsula may have been the main route out of Africa. However as the region lacks of autochthonous clades of haplogroups M and N the authors suggest that the area has been a more recent receptor of human migrations than an ancient demographic expansion center along the southern coastal route as proposed under the single migration Out-of-Africa scenario of the African origin hypothesis.[4]

Due to its great age, haplogroup M is an mtDNA lineage which does not correspond well to present-day ethnic groups. It is found among Siberian, Native American, East Asian, Southeast Asian, Central Asian, South Asian, Melanesian as well as Egyptian, Ethiopian, Somali, European, and various Middle Eastern populations at varying frequencies. 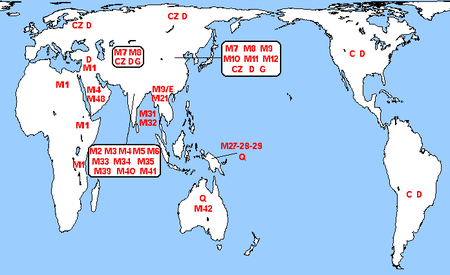 Location of M subclades around the World