Harald "Blåtand" Gormsson (Old Norse: Haraldr blátǫnn Gormsson, Danish: Harald Blåtand Gormsen) (probably born c. 935) was a King of Denmark and Norway. He was the son of King Gorm the Old and of Thyra Dannebod. He died in 985 or 986 having ruled as King of Denmark from c. 958 and King of Norway for a few years; probably around 970. Some sources say his son Sweyn Forkbeard forcibly deposed him.

"King Harald bade these memorials to be made after Gorm, his father, and Thyra, his mother. The Harald who won the whole of Denmark and Norway and turned the Danes to Christianity." 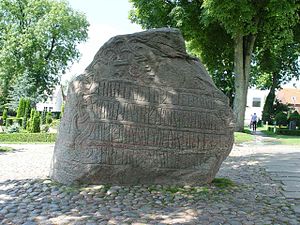 King Harald Bluetooth's conversion to Christianity is a contested bit of history, not least because medieval writers such as Widukind of Corvey and Adam of Bremen give conflicting accounts of how it came about.

Widukind of Corvey, writing during the lives of King Harald and Otto I, claims that Harald was converted by a "cleric by the name of Poppa" who, when asked by Harald to prove his faith in Christ, carried a "great weight" of iron heated by a fire without being burned.[4]

Adam of Bremen, writing 100 years after King Harald's death in "History of the Archbishops of Hamburg-Bremen", finished in 1076, describes Harald being forcibly converted by Otto I, after a defeat in battle.[5] However, Widukind does not mention such an event in his contemporary Res gestae saxonicae sive annalium libri tres or Deeds of the Saxons. Four hundred years later, the Heimskringla relates that Harald was converted with Earl Haakon, by Otto II.[6]

A cleric named Poppa, perhaps the same one, also appears in Adam of Bremen's history, but in connection with Eric of Sweden, who had supposedly conquered Denmark (there is no evidence anywhere else that this happened).[7] The story of this otherwise unknown Poppo or Poppa's miracle and baptism of Harald is also depicted on the gilded altar piece in the Church of Tandrup in Denmark (see image at top of this article). The altar itself dates to about 1200.[8] Adam of Bremen's claim regarding Otto I and Harald appears to have been inspired by an attempt to manufacture a historical reason for the archbishops of Hamburg-Bremen to claim jurisdiction over Denmark (and thus the rest of Scandinavia); in the 1070s, the Danish King was in Rome asking for Denmark to have its own arch-bishop, and Adam's account of Harald's supposed conversion (and baptism of both him and his "little son" Sweyn, with Otto serving as Sweyn's godfather) is followed by the unambiguous claim that "At that time Denmark on this side of the sea, which is called Jutland by the inhabitants, was divided into three dioceses and subjected to the bishopric of Hamburg."[5]

As noted above, Harald's father, Gorm the Old, had died in 958, and had been buried in a mound with many goods, after the pagan practice. The mound itself was from c. 500 BCE, but Harald had it built higher over his father's grave, and added a second mound to the south. Mound-building was a newly revived custom in the 10th century, perceivably as an "appeal to old traditions in the face of Christian customs spreading from Denmark's southern neighbors, the Germans."[9]

After his conversion, around the 960s, Harald had his father's body reburied in the church next to the now empty mound, and erected one of the Jelling stones described above.

Harald undoubtedly professed Christianity at that time and contributed to its growth, but with limited success in Denmark and Norway.[10] 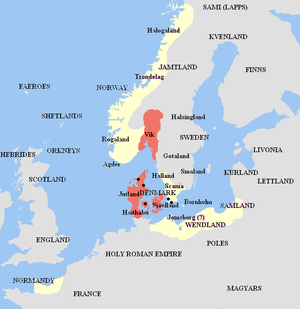 Harald's kingdom (in red) and his vassals and allies (in yellow), as set forth in Heimskringla, Knytlinga Saga, and other medieval Scandinavian sources.

During his reign, Harald oversaw the reconstruction of the Jelling runic stones, and numerous other public works. Some believe these projects were a way for him to consolidate economic and military control of his country. Ring forts were built in five strategic locations: Trelleborg on Zealand, Borrering in eastern Zealand (the inner construction of this fort is still yet to be established), Nonnebakken on Funen, Fyrkat in Himmerland (northern Jutland) and Aggersborg near Limfjord. All five fortresses had similar designs: "perfectly circular with gates opening to the four corners of the earth, and a courtyard divided into four areas which held large houses set in a square pattern."[11] A sixth Trelleborg of similar design, located at Borgeby, in Scania, has been dated to about 1000 and may also have been built by King Harald and a second fort named Trelleborg is located near the modern town of Trelleborg in Scania in present-day Sweden, but is of older date and thus pre-dates the reign of Harald Bluetooth.

While quiet prevailed throughout the interior, he turned his energies to foreign enterprises. He came to the help of Richard the Fearless of Normandy in 945 and 963, while his son conquered Samland, and after the assassination of King Harald Greycloak of Norway, managed to force the people of that country into temporary subjugation to himself.

The Norse sagas present Harald in a rather negative light. He was forced twice to submit to the renegade Swedish prince Styrbjörn the Strong of the Jomsvikings- first by giving Styrbjörn a fleet and his daughter Thyra, the second time by giving up himself as hostage, along with yet another fleet. When Styrbjörn brought this fleet to Uppsala to claim the throne of Sweden, Harald broke his oath and fled with his Danes to avoid facing the Swedish army at the Battle of Fýrisvellir.

As a consequence of Harald's army having lost to the Germans at the Danevirke in 974, he no longer had control of Norway, and Germans settled back into the border area between Scandinavia and Germany. They were driven out of Denmark in 983 by an alliance of Obodrite soldiers and troops loyal to Harald, but soon after, Harald was killed fighting off a rebellion led by his son Swein. He is believed to have died in 986, although several accounts claim 985 as his year of death.

From 1835 to 1977 it was wrongly believed, that Harald ordered the death of the Haraldskær Woman, a bog body previously thought to be Gunnhild, Mother of Kings until radiocarbon dating proved otherwise.[12]

Harald's nickname "Bluetooth" first documented appearance is in the Chronicon Roskildense from 1140.[13] The usual explanation is that Harald must have had a conspicuous bad tooth that appeared "blue" (i.e. black, as "blue" meant dark).

Another explanation, is that he was called Thegn in England (corrupted to "tan" when the name came back into Old Norse) — in England, Thane meant chief. Since blue meant "dark", his nickname was really "dark chieftain".[14]

A third theory, according to curator at the Royal Jelling Hans Ole Mathiesen, was that Harald went about clothed in blue. The blue color was in fact the most expensive, so by walking in blue Harald underlined his royal dignity.[15] 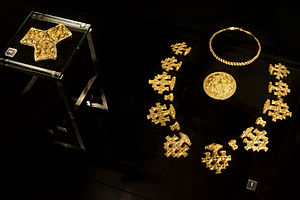 One of the lesser known archaeological finds in Germany is the Hiddensee treasure which was discovered by chance in the 19th century on the tiny island Hiddensee in the Baltic Sea.[16]

In each of the years 1864 and 1872 the island Hiddensee was hit by severe storm floods. The first storm flood broke Hiddensee in two when the entire centre section of the island was flooded, something which could only be reversed by extensive building measures. After the second storm flood the famous Hiddensee treasure was supposed to have been found.

The Hiddensee treasure has an insured value amounting to 70M EUR. 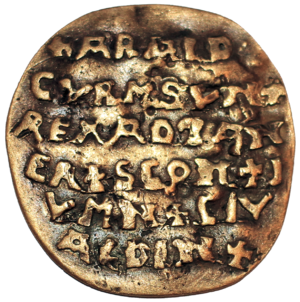 In autumn 2014 a golden disc bearing the name of Harald Bluetooth appeared in Sweden. The disc is mainly made of gold and is measuring 4,5 cm in diameter and has a weight of 25,23 gram. On the obverse there is a Latin inscription and on the reverse there is a cross and an octagon. The inscription translates as "Harald Gormsson king of Danes, Scania, Jomsborg, Oldenburg".[17] It is assumed that the disc was a part of a Viking hoard found in 1840, close to the island of Wolin, Poland. The disc was rediscovered in 2014 by an 11 year old schoolgirl who found it in an old casket and then brought it to school.[18]

The curmsun disc underwent metallurgical analysis at University of Lund in Sweden. The analysis showed that the alloy has a gold content ranging between 83,3-92,8%.[19] According to a hypothesis by Swedish archeologist Sven Rosborn the disc may have been created by a Frankish monk in connection with Harald's death.[20] Danish anthropologist, Karen Schousboe, presents another hypothesis as she believes that the disc was a wedding gift, created in the 960s. She also sees a connection to 10th-12th century Byzantine talismans.[21]

Matuesz Bogucki, of University of Warsaw, states in an interview with Anders Lundt Hansen in the Danish magazine Weekendavisen[22] that the type of cross and the letters on the Curmsun Disc do not correspond to cross and letters on coins of the 10th century. Matuesz Bogucki has noticed similarities between the cross on The curmsun disc with cross on coins from Halle/Schwaben in the 13th century.

Bluetooth logo with runes H and B, referring to Harald Bluetooth

"Bluetooth" now commonly refers to the Bluetooth wireless specification design started by Ericsson, Nokia, Intel and Toshiba to enable cable-free connections between computers, mobile phones, PDAs, printers, etc. The Bluetooth communications protocol in these devices is named after the king, because he unified Denmark and Norway much like the technology whose goal was to unify computers and cellular phones.[24]

The Bluetooth logo consists of the younger futhark runes, also known as the Nordic runes for his initials, H (

Harald Bluetooth, depicted as leader of Denmark in the video game Sid Meier's Civilization V. He was released along with Denmark as DLC, in the May 2011 DLC The Civilization and Scenario Pack.