The term was coined in the second half of the 20th century to distinguish it from softcore pornography, which may use simulated sex and limits the range and intensity of depictions of sexual activities.

The prehistory of modern pornography is the classical American Stag film, also known as blue movies, a body of clandestine short pornographic films produced during the first two-thirds of the 20th century. While the exact corpus of the distinctive stag film remains unknown, scholars at the Kinsey Institute believe there are approximately 2000 films produced between 1915-1968.[1] Stag cinema is a form of hardcore film and is characterized as silent, usually filling a single reel or less, and was illegally made and exhibited because of censorship laws in America. Women were excluded from these private screenings that were shown in American "smoker" houses such as fraternities or other exclusive institutions. In Europe, films of the same kind were screened within brothels. The mode of reception of the all-male audience of stag films was raucous, collective sexual banter[2] and sexual arousal. Film historians describe stag films as a primitive form of cinema because they were produced by anonymous and amateur male artists who failed in achieving narrative coherence and continuity within their diegesis. Today, many of these films have been archived by the Kinsey Institute, however most are in a state of decay and have no copyright, real credits, or acknowledged authorship. The stag film era inevitably ended due to the beginnings of the sexual revolution in the fifties in combination with the new technologies of the post war era, such as 16mm, 8mm, and the Super 8. American stag cinema in general has received scholarly attention first in the mid-seventies by heterosexual males such as in Di Lauro and Gerald Rabkin's Dirty Movies (1976) and more recently by feminist and queer cultural historians such as in Linda M. Williams' Hard Core: Power Pleasure, and the "Frenzy of the Visible" (1989) and Thomas Waugh's Homosociality in the Classical American Stag Film: Off-Screen, On-screen (2001). 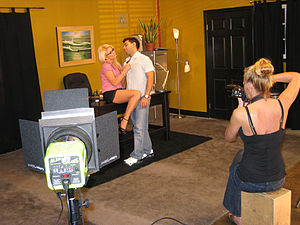 On the set of a pornographic film

The distribution of hardcore pornography had been widely prohibited in many countries until the second half of the 20th century when many countries began to allow some dissemination of softcore material. Supply is now usually regulated by a motion picture rating system as well as by direct regulation of points of sale. Restrictions, as applicable, apply to the screening, or rental, sale, or giving of a movie, in the form of a DVD, video, computer file, etc. Public display and advertising of hardcore pornography is often prohibited, as is its supply to minors.

Most countries have eased the restrictions on the distribution of pornography, either by general or restricted legalization or by failure to enforce prohibitive legislation. Most easing of restrictions has been by way of changes to the criteria of a country's movie classification system. The anti-pornography movement often vigorously opposes legalization. In 1969, Denmark became the first country in the world to legalize pornography.[3] In the U.S., legal interpretations of pornography in relation to the constitutional right to free speech differ from state to state and from city to city. Hardcore pornography was legalized in the UK in 2000.[4]

Berl Kutchinsky's Studies on Pornography and Sex Crimes in Denmark (1970), a scientific report commissioned by the Presidential Commission on Obscenity and Pornography, found that the legalizing of pornography in Denmark had not (as had been expected) resulted in an increase of sex crimes.[5]

A study conducted in Denmark in 2003 and later published in Archives of Sexual Behavior found that men and women generally believe that hardcore pornography has a positive influence on their lives.[6]