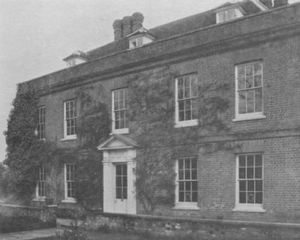 Hare Street House is a grade II* listed building in the hamlet of Hare Street, which lies between Buntingford and Great Hormead in the East Hertfordshire district of Hertfordshire, England.[1] It is mainly associated with the Roman Catholic priest and writer R.H.Benson who owned the house from 1906 until his death in 1914.[2]

The earliest parts of the building date from the late 16th or early 17th century. The brick frontage was added in the early 18th century, possibly for William Benn, Sheriff of Hertfordshire and Lord Mayor of London in 1747. The house was in disrepair when Benson saw it in 1903 and purchased it for "an extraordinarily low sum".[3] Benson carried out many internal alterations, with the help of the artist Gabriel Pippet. Benson left Hare Street House to the archdiocese of Westminster following his death.[2] It has since been used as a country retreat for the archbishop and remains under the ownership of the archdiocese. Further restoration was carried out in 1962 for William Cardinal Godfrey[1] who had earlier appointed the poet and mystic John Bradburne to be caretaker.[4]

A charitable trust "to generate income for the upkeep and repair of Hare Street House" is maintained by the archdiocese of Westminster.[5] Cardinal Hinsley died at Hare Street House in 1943.[6][7]

A 17th century brewhouse in the grounds was converted to a chapel by Benson. This too has listed status[8] as do the gates to the grounds.[9] A further chapel stands in the grounds of the house, built over the grave of Benson and dedicated to St Hugh.[2] 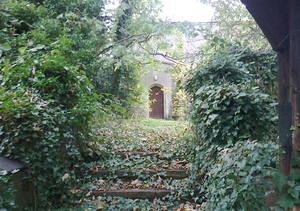 Chapel built over the grave of RH Benson. Taken October 2014