Nicholas Harold Lloyd Ridley was the son of Nicholas Charles Ridley and his wife Margaret, née Parker; he had a younger brother, Olden. Harold had a stammer which he largely managed to cure. As a child he met and sat on the lap of Florence Nightingale, a close friend of his mother.[3] He was educated at Charterhouse School before studying at Pembroke College, Cambridge from 1924–1927, and completed his medical training in 1930 at St Thomas' Hospital. Subsequently he worked as a surgeon at both St Thomas' Hospital and Moorfields Eye Hospital in London, specialising in ophthalmology. In 1938 Ridley was appointed full surgeon and consultant at Moorfields Hospital and later appointed consultant surgeon in 1946. 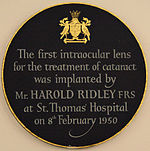 During World War II, Ridley saw Royal Air Force casualties with eye injuries, including Squadron Leader Gordon "Mouse" Cleaver of 601 Squadron. Ridley observed that when splinters of acrylic plastic from aircraft cockpit canopies became lodged in their eyes, this did not trigger inflammatory rejection as did glass splinters.

This led him to propose the use of artificial lenses made of Perspex in the eye, to treat cataract. He had a lens manufactured using the same material – brand name Perspex made by ICI – and on 29 November 1949 at St Thomas' Hospital, Harold Ridley achieved the first implant of an intraocular lens, although it was not until 8 February 1950 that he left an artificial lens permanently in place in an eye. The first lens was manufactured by the Rayner company of Brighton & Hove, East Sussex, a company which continues to manufacture and market modern, small-incision intraocular lenses today.

The first IOL implant in the United States was performed in 1952, a Ridley-Rayner lens implanted at the Wills Eye Hospital in Philadelphia.[6]

Ridley pioneered this treatment in the face of prolonged strong opposition from the medical community. He worked hard to overcome complications, and had refined his technique by the late 1960s. With his pupil Peter Choyce he eventually achieved worldwide support for the technique. The intraocular lens was finally approved as "safe and effective" and approved for use in the US by the Food and Drug Administration in 1981. The first US Food and Drug Administration (FDA) approved lenses, (Choyce Mark VIII and Choyce Mark IX Anterior Chamber lenses) were manufactured by Rayner.[7]

Cataract extraction surgery with intraocular lens implantation is now the most common type of eye surgery.

Harold Ridley was in civilian hospital services in South East England during the early years of in World War II.- the time when saw injured pilots from the Battle of Britain.

In the middle years of the war he was with the R.A.M.C (Royal Army Medical Corps). and posted to West Africa and South East Asia.

The Club was founded in 1966 by Ridley and Peter Choyce,[7] to promote research in the field of IOL implantation.[11][12] At that time there was widespread opposition in the profession to the use of IOLs.[3] The founders saw the club as a forum to allow free and unhindered exchange of ideas about IOLs and implantation surgical techniques. From the outset it was international in its membership and set itself a parental and advisory role for the then nascent national societies to develop in each country for intraocular implant surgeons. However, this global role was only acknowledged in the name change in July 1975, when the Intra-Ocular Implant Club became The International Intra-Ocular Implant Club. (IIIC).[11]

In 1967 Ridley set up the Ridley Eye Foundation,[13] to raise funds for cataract surgery in developing countries and to treat avoidable blindness.[3] A registered charity under English law,[14] this charitable organisation continues to be active in these fields today, notably in the Middle East.

In the 1990s he underwent successful bilateral intraocular lens implantation at St Thomas's Hospital by surgeon Mr. Michael Falcon. Thus Harold Ridley benefitted from his own invention and the operational procedure he had pioneered but what was most pleasing to him was that he had it done in the same hospital where he performed the first operation.[4]

Sir Harold Ridley resided in Stapleford near Salisbury, Wiltshire until his death on 25 May 2001.

In the thirty years after implanting the first intraocular lens Ridley received scant thanks and recognition from his peers. That began to change in the last twenty years of his life when he finally received the recognition that an inventor whose invention restored the sight of millions of patients worldwide, finally he was honoured with a knighthood.[15]

On 6 January 2016, during the television programme The One Show on BBC 1 a short film was shown about the link between Gordon Cleaver and Sir Harold Ridley. Using archive film and photographic material and an interview with Sir Harold’s son Nicholas Ridley, the Chairman of the Ridley Eye Foundation, Michael Mosely reported on the “Eureka moment” that led to the invention of the intraocular lens. The film was made by ICON FILMS, based in Bristol England