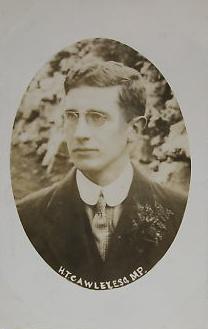 Born at Crumpsall, he was the second son of Frederick Cawley, 1st Baron Cawley and his wife Elizabeth Smith, daughter of John Smith.[2] His younger brother was Oswald Cawley.[2] Cawley was educated at Rugby School and then at New College, Oxford, where he graduated with a Master of Arts.[3] He was called to the Bar by the Inner Temple in 1902 and went to the Northern Circuit, working in Lancashire.[3] Two years later he joined the 2nd Volunteer Battalion, Manchester Regiment.[4]

In 1910, Cawley entered the British House of Commons for Heywood,[1] and a year later he was appointed Parliamentary Private Secretary to the Home Secretary Reginald McKenna.[2] In 1914 he became aide de camp to Major-General William Douglas, the officer commanding 42nd (East Lancashire) Division.[4]

In the First World War, Cawley fought in the Battle of Gallipoli where he was killed in action.[5] Before his death, he sent a letter to his father, at that time representative of Prestwich in the Parliament of the United Kingdom.[4] As a Member of Parliament the letter was not subject to military censorship, and it reported the mishandling of the Dardanelles campaign in some detail.[4]

It was in memory of Harold and two other sons - Oswald and John - who died in the war that their father endowed a ward at Ancoats Hospital, Manchester, in 1919 at a cost of £10,000.[6]