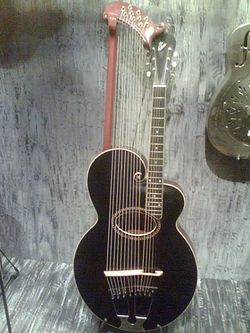 The harp guitar (or "harp-guitar") is a guitar-based stringed instrument with a history of well over two centuries. While there are several unrelated historical stringed instruments that have been referred to as "harp-guitar" over the centuries, its most common definition is a "guitar, in any of its accepted forms, with any number of additional unstopped strings that can accommodate individual plucking."[2] The word "harp" is used in reference to its harp-like unstopped open strings. A harp guitar must have at least one unfretted string lying off the main fretboard, typically played as an open string.

This family consists of many varieties of instrument configurations. Most readily identified are American harp guitars with either hollow arms, double necks or harp-like frames for supporting extra bass strings, and European bass guitars (or contraguitars). Other harp guitars feature treble or mid-range floating strings, or various combinations of multiple floating string banks along with a standard guitar neck.[3]

Michael Hedges was known for occasionally using a 1920s-era harp guitar, such as in his song "Because It's There". Andy McKee also plays a harp guitar in a few of his songs, such as "Into The Ocean". Don Alder uses the Harp guitar in songs such as "Sayonara.calm" and "Man from Ladylane" a song dedicated to Stephen Bennett, founder of the Harp Guitar Gathering and one of the top current day harp guitar players. Antoine Dufour also uses the instrument occasionally, such as in his song "Paroxysm".

Alfred Karnes (1891–1958) was an Old Time Country and Southern Gospel singer and guitarist who recorded at the famous Bristol Sessions in 1927. He was known for songs such as "I'm Bound for the Promised Land" and "To the Work".