From Infogalactic: the planetary knowledge core
Jump to: navigation, search
Not to be confused with Harper's Weekly, Harper's Bazaar, or Harpers Magazine (trade publication). 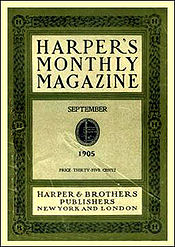 Harper's Magazine (also called Harper's) is a monthly magazine of literature, politics, culture, finance, and the arts. Launched in June 1850, it is the second-oldest continuously published monthly magazine in the U.S. (Scientific American is the oldest). The current editor is Ellen Rosenbush, who replaced Roger Hodge in January 2010. Harper's Magazine has won many National Magazine Awards.[2] 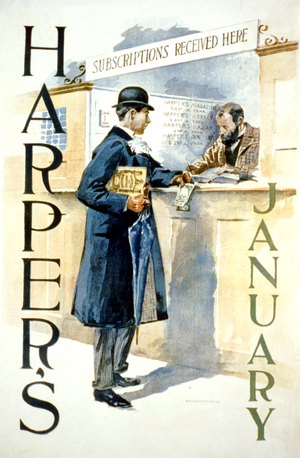 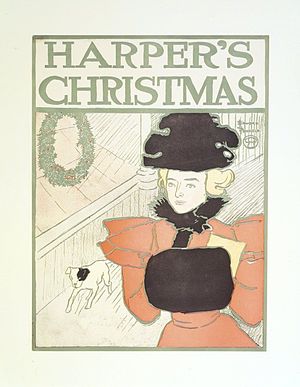 The early issues reprinted material pirated from English authors such as Charles Dickens, William Makepeace Thackeray, and the Brontë sisters.[4] The magazine soon was publishing the work of American artists and writers, and in time commentary by the likes of Winston Churchill and Woodrow Wilson. Portions of Herman Melville's novel Moby Dick were first published in the October 1851 issue of Harper's under the title, "The Town-Ho's Story" (titled after Chapter 54 of Moby Dick).[5] 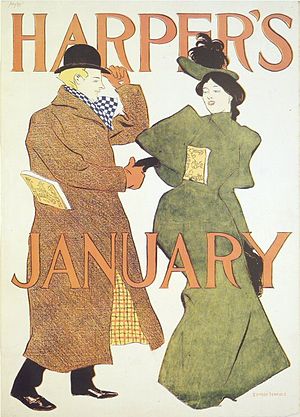 In 1962, Harper & Brothers merged with Row, Peterson & Company, becoming Harper & Row (now HarperCollins). In 1965, the magazine was separately incorporated, and became a division of the Minneapolis Star and Tribune Company, owned by the Cowles Media Company.

In the 1970s, Harper's published Seymour Hersh's reporting of the My Lai Massacre by United States forces in Vietnam. In 1971 editor Willie Morris resigned under pressure from owner John Cowles, Jr., prompting resignations from many of the magazine’s star contributors and staffers, including Norman Mailer, David Halberstam, Robert Kotlowitz, Marshall Frady and Larry L. King:

"Morris’s departure jolted the literary world. Mailer, William Styron, Gay Talese, Bill Moyers, and Tom Wicker declared that they would boycott Harper’s as long as the Cowles family owned it, and the four staff writers hired by Morris—Frady among them—resigned in solidarity with him.”

Robert Shnayerson, a senior editor at Time magazine, was hired to replace Morris as Harper's ninth editor, serving in that position from 1971 until 1976.[7][8]

Lewis H. Lapham served as managing editor from 1976 until 1981; he returned to the position again from 1983 until 2006. On June 17, 1980, the Star Tribune announced it would cease publishing Harper's Magazine after the August 1980 issue. But, on July 9, 1980, John R. MacArthur (who goes by the name Rick) and his father, Roderick, obtained pledges from the directorial boards of the John D. and Catherine T. MacArthur Foundation, the Atlantic Richfield Company, and CEO Robert Orville Anderson to amass the $1.5 million needed to establish the Harper's Magazine Foundation. It now publishes the magazine.[9][10][11]

In 1984, Lapham and MacArthur—now publisher and president of the foundation—along with new executive editor Michael Pollan, redesigned Harper's and introduced the "Harper's Index" (statistics arranged for thoughtful effect), "Readings", and the "Annotation" departments to complement its fiction, essays, reportage, and reviews. As of the March 2011 issue, contributing editor Zadie Smith, a noted British author, writes the print edition's New Books column.

Under the Lapham-MacArthur leadership, Harper's magazine continued publishing literary fiction by the likes of John Updike, George Saunders, and others. Politically, Harper's was an especially vocal critic of U.S. domestic and foreign policies. Editor Lapham's monthly "Notebook" columns have lambasted the Clinton and the George W. Bush administrations. Since 2003, the magazine has concentrated on reportage about U.S. war in Iraq, with long articles about the battle for Fallujah, and the cronyism of the American reconstruction of Iraq. Other reporting has covered abortion issues, cloning, and global warming.[12]

In 2007, Harper's added the No Comment blog, by attorney Scott Horton, about legal controversies, Central Asian politics, and German studies. In April 2006, Harper's began publishing the Washington Babylon blog on its website,[13] written by Washington Editor Ken Silverstein about American politics; and in 2008, Harper's added the "Sentences" blog, by contributing editor Wyatt Mason, about literature and belles lettres. Since that time these two blogs have ceased publication. Another website feature, composed by a rotating set of authors, is the Weekly Review, single-sentence summaries of political, scientific, and bizarre news; like the Harper's Index and "Findings" in the print edition of the magazine, the Weekly Review items are arranged for ironic contrast.

Editor Lewis H. Lapham was criticized for his reportage of the 2004 Republican National Convention, which had yet to occur, in his essay "Tentacles of Rage: The Republican Propaganda Mill, a Brief History," published in the September 2004 issue which implied that he had attended the convention. He apologized in a note.[14][15] Lapham left shortly thereafter and launched Lapham's Quarterly.

The August 2004 issue contained a photo essay by noted photojournalist Peter Turnley, who had been hired to do a series of photo essays for the magazine. The eight-page spread in August 2004 showed images of death, grieving and funerals from both sides of the U.S. war in Afghanistan. On the U.S. side, Turnley visited the funeral of an Oklahoma National Guard member, Spc. Kyle Brinlee, 21, who was killed when his vehicle ran over an improvised explosive device (IED) in Afghanistan. During his funeral, Turnley shot the open casket as it lay in the back of the auditorium and this photo was used in the photo essay. Consequently, the family sued the magazine in federal court. The case ended in 2007 when the U.S. Supreme Court upheld the ruling of the Tenth Circuit that the magazine had not violated the privacy rights of the family.[16]

The March 2006 issue contained Celia Farber's article, "Out of Control: AIDS and the Corruption of Medical Science," presenting Peter Duesberg's theory that HIV does not cause AIDS.[17][18] It was strongly criticized by AIDS activists,[19] scientists and physicians,[20] the Columbia Journalism Review,[21] and others as inaccurate and promoting a scientifically discredited theory.[22] The Treatment Action Campaign, a South African organization working for greater popular access to HIV treatments, posted a response by eight researchers documenting more than fifty errors in the article.[23]

The abrupt firing of the magazine's well-liked editor, Roger Hodge, by publisher John R. MacArthur, on January 25, 2010, was met with widespread and well-publicized criticism among the magazine's subscribers and staffers alike.[24][25][26] MacArthur initially claimed Hodge was stepping down for "personal reasons," but later disclosed that he fired Hodge.[27]