Henrietta Elizabeth "Harriet" Leveson-Gower, Countess Granville (née Cavendish; 29 August 1785 – 25 November 1862) was a British peeress and society hostess. She was born in Devonshire House as the second daughter of William Cavendish, 5th Duke of Devonshire by his wife, the political hostess Lady Georgiana Spencer. Despite her parents' turbulent marriage, Harriet had a happy childhood. Her mother's death in 1806 led to an unpleasant situation in which her father's long-time mistress Lady Elizabeth Foster took control of the Devonshire household; as the unmarried eldest daughter, this should have been Harriet's role.

To help her escape this awkward domestic situation, Harriet's maternal aunt Henrietta arranged for her niece to marry her lover of seventeen years, Granville Leveson-Gower, 1st Earl Granville. The couple's marriage proved to be happy, and it produced five children. Granville served as his country's ambassador to France intermittently from 1824 to 1841, and he was awarded an earldom in 1833. With her position, Harriet acted as hostess to Parisian society, writing detailed accounts that were later published. She died in 1862 of a stroke, having been widowed fifteen years.

Lady Henrietta Elizabeth Cavendish was born at Devonshire House on 29 August 1785, the younger daughter of William Cavendish, 5th Duke of Devonshire and his wife Lady Georgiana Spencer.[1] Known as "Harriet" or "Harryo" to her family, the baby was named after Georgiana's sister Henrietta Ponsonby and her friend Lady Elizabeth Foster.[1][2] Her parents' marriage had been unhappy from the start; the Duchess had difficulty bringing her pregnancies to term, suffering miscarriages during their first nine years together.[3] Her mother distracted herself by becoming immersed in society, and was soon known as a political hostess and leader of fashion.[3]

Despite the state of her parents' marriage, Cavendish had a happy childhood. She was devoted to her mother, and was fond of, but rarely saw, her aloof father.[1][4] Her governess Selina Trimmer was a daughter of the famous children's writer Sarah Trimmer,[1] [5] and encouraged her charge to be morally principled.[6] In May 1799, Cavendish was confirmed in Westminster Abbey alongside her cousin, the future Lady Caroline Lamb.[7] The historian Janet Gleeson describes Cavendish as slightly plump in appearance, in possession of a clever, funny, and perceptive personality.[8] Her biographer, Virginia Surtees, writes that although Cavendish was "no beauty, she had wit, intelligence, and shrewdness; her sharp eye missed little but in high croak and spirits viewed with tolerance the world of drums, dandies, gossip, and matchmaking in which she moved".[1]

In 1802, Cavendish's cousin John Ponsonby, Viscount Duncannon (her mother's sister's son), whom she had known her entire life, began to show romantic interest in her. Cavendish was unsure whether she cared for him enough,[8] and they agreed to wait a year before deciding "whether they liked each other well enough to marry".[9] Their two families, especially his mother (and her aunt) Lady Bessborough approved of the match, but Cavendish was still undecided. During this period, John had romantic relationships with Lady Maria Fane and others; Cavendish presented an ultimatum that he "must promise to cure himself completely of flirting, for she could not bear it".[9] John angrily refused that he was not ready to marry her after all, nor "bear rules to be prescribed to him by any woman living".[9] He became engaged to Fane shortly thereafter.[9] Her family later encouraged a match with another cousin John Spencer, Viscount Althorp, though, during her stay at Althorp, she stated that "no reasonable woman" could think of him as anything "but as an eager huntsman".[10]

The Duchess of Devonshire died in March 1806;[3] and Cavendish's life at home became unhappy.[1][4] Her father had been involved in a relationship with Lady Elizabeth Foster for years. Always greatly resentful of Foster's presence in the household, Cavendish was angered when she took control of their home, for instance disliking it when her place at the head of the table was taken by Foster. As the unmarried adult daughter, this role should have been taken by Cavendish, not by Foster (who was not yet married to her father).[1][11] During this period, Cavendish frequently went to live with her elder sister, Georgiana, who was recently married to the future 6th Earl of Carlisle; Cavendish's son Frederick later wrote that the experience "strengthened the tie of sisterly affection, which bound them together during the whole of their joint lives".[4] From 1801 onwards, Cavendish wrote to her sister almost daily until the latter's death in 1858.[1] Three years after her mother's 1806 death, the Duke married Foster.[4] 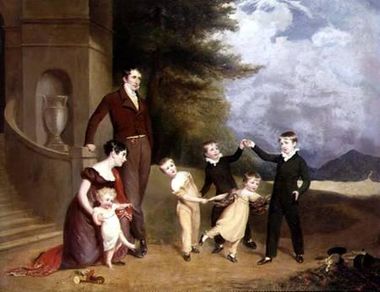 The Earl and Countess Granville with their children

With her mother dead, Cavendish's aunt Henrietta Ponsonby felt obligated to help her niece escape a difficult home situation. For her part, Cavendish had been critical of her aunt in the past but now turned to her for affection, support, and as a reminder of her mother.[12] Once the Duke of Devonshire made clear his desire to marry Foster,[1] Henrietta began searching for a suitable marriage prospect for her niece, and suggested Lord Granville Leveson-Gower, as he was known at that time. Lord Granville had been Henrietta's own lover by now for seventeen years; she had borne him two illegitimate children during their relationship and declared once that she "loved him to idolatry." Nevertheless, Henrietta encouraged her niece to consider marriage with the thirty-seven-year-old Granville.[1][13] Though still infatuated with him, she knew that Granville would need to eventually marry and produce legitimate offspring, and that when he did so, she would likely lose him. Getting her niece to marry him was one way of keeping him within her circle.[14]

Cavendish had been acquainted with Lord Granville her whole life and never particularly cared for him, having disapproved alike of his lofty hauteur and his illicit liaison with her aunt.[15] Now however, she came to appreciate Granville's finer qualities: historians describe him as handsome, intelligent, of good family, and a member of the British parliament.[1][13] The historian K. D. Reynolds writes that Granville was "considered one of the most handsome men of his time; his curly brown hair, blue eyes, and sensuous features brought him strings of female admirers."[13] While eager to leave Devonshire House, the morally upright girl insisted that his affair with her aunt be truly over.[6] Granville was unsure if he wanted the unglamorous Cavendish as a marriage partner, however, and spent his time pursuing other candidates; their refusals, often in response to his womanising reputation, led him to ultimately choose Cavendish.[16]

On 24 December 1809, Cavendish married Granville with her aunt's blessing.[13][17] Though ageing, Granville maintained his handsome appearance and Cavendish was said to have "[in] high degree the charm of voice and manner which belongs to the Cavendish family".[18] Their marriage was happy; she loved him until her death,[1] writing in September 1810 to her sister, "I really think I am happier every hour. There never was anything so adorable as he is in every way".[19] Their eldest child, Susan, was born in October 1810 in London.[20][21] The couple would go on to have four further children,[13] and his two illegitimate issue with Henrietta also flourished in the happy household.[1][18] Granville was made a Viscount in 1815;[22] an earldom awarded in 1833 led to Harriet becoming known as Countess Granville.[1]

The couple lived in England for their first fifteen years of marriage, sometimes travelling to the continent for short periods, but mainly dividing their time between London and the countryside. Granville rented a residence in Tixall, Staffordshire before moving to a rental in Wherstead, Suffolk, entertaining society figures at both places.[23] During long stretches between 1824 and 1841, Granville served as his country's ambassador to France.[13][24] The Countess helped entertain Parisian society by serving as hostess, writing detailed accounts that were later published in 1894, 1940, and 1990.[1] Granville resigned the post in 1841 only after becoming ill; for the next two years, the family travelled across Europe before returning to England in November 1843. They resided in houses in Brighton and London, and spent portions of their time visiting friends and family at their various country estates.[13][24]

Lord Granville died in early 1846, having never recovered from a stroke he suffered five years previously.[13][24] He was buried at Stone, Staffordshire.[13] His death desolated his wife.[1] She lived henceforth in complete retirement,[24] residing chiefly at Chiswick House, where she turned to piety for consolation.[1] Her contacts in the outside world were chiefly her children and step-children, her brother William, and the children of her sister Georgiana.[1][24] She survived her husband by fifteen years,[24] dying on 25 November 1862 of a stroke at her London home at 13 Hereford Street.[1]