Harriet Monroe (December 23, 1860 – September 26, 1936) was an American editor, scholar, literary critic, poet and patron of the arts. She is best known as the founding publisher and long-time editor of Poetry magazine, which made its debut in 1912. As a supporter of the poets Wallace Stevens, Ezra Pound, H. D., T. S. Eliot, William Carlos Williams, Carl Sandburg , Max Michelson and others, she played an important role in the development of modern poetry. Because she was a longtime correspondent of the poets she supported, her letters provide a wealth of information on their thoughts and motives. 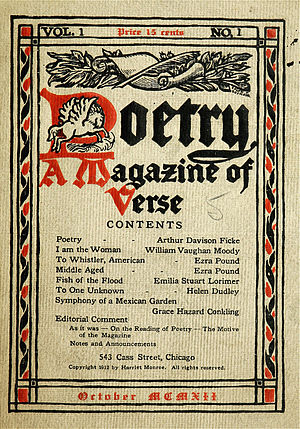 Monroe was born in Chicago, Illinois. She read at an early age; her father had a large library that provided refuge from domestic discord.[1] In her autobiography, A Poet's Life: Seventy Years in a Changing World, published two years after her death, Monroe recalls: "I started in early with Shakespeare, Byron, Shelley, with Dickens and Thackeray; and always the book-lined library gave me a friendly assurance of companionship with lively and interesting people, gave me friends of the spirit to ease my loneliness."[2]

Monroe graduated from the Visitation Academy of Georgetown, D.C., in 1879. Monroe was later recognized as a 'wunderkind,' her prose piece published in 1899 in the Atlantic Monthly The Grand Canyon of the Colorado[3] was considered better poetry than her most notable poem[4] I love my life[5]

Driven by fears of posthumous anonymity, she proclaimed after graduation her determination to become "great and famous" as a poet or playwright. In the Dictionary of Literary Biography Judith Paterson quoted her as saying, "I cannot remember when to die without leaving some memorable record did not seem to me a calamity too terrible to be borne."[6] She afterward devoted herself to literary work. Monroe in her biography said 'I have sense of consecration that made me think I would prefer art to life' [7]

Though Century magazine published her poem, "With a Copy of Shelley," in 1889, she became disillusioned by the limited earnings available for poets, saying: "The minor painter or sculptor was honored with large annual awards in our greatest cities, while the minor poet was a joke of the paragraphers, subject to the popular prejudice that his art thrived best on starvation in a garret."[6] She became a freelance correspondent to the Chicago Tribune, and was commissioned to write a commemorative ode for the 400th anniversary of Columbus's discovery of America.[1]

Her financial hardships were alleviated after she sued the New York World for publishing the poem without her consent and she was awarded $5,000 dollars in a settlement.[1] With help from publisher Hobart Chatfield-Taylor, Monroe convinced one hundred prominent Chicago business leaders to sponsor the magazine Poetry by each committing to fifty dollars a year for a five-year subscription. The $5,000, coupled with her own settlement, was enough to launch the magazine on September 23, 1912, while upholding its promise to contributors of adequate payment for all published work.[1] Monroe was editor for its first two years without salary, while simultaneously working as an art critic for the Chicago Tribune. By 1914 the magazine work became too much for her to accomplish while working other jobs, so she resigned from the Chicago Tribune and accepted a salary of fifty dollars per month from the magazine. For more than ten years she maintained herself on this stipend, raising it to one hundred dollars per month in 1925.[1]

Don Share, who became editor of Poetry in 2013, writes that Monroe seemed to have a "sixth sense" about the poetry she published. Monroe, herself, wrote and preferred poems rooted in 19th century tradition but in her magazine, "that countervailing sixth sense allowed her to make literary history. She invented a box, you could say — and promptly set to work thinking outside it. Her magazine was, therefore, like she was: unpredictable, difficult, and infuriating,"[8] but she never wavered in her assessment of progressive American culture as a democratic triumph.[9]

She continued editing the magazine until she died in Arequipa, Peru, at age 75, while on her way to climb Macchu Picchu. The high altitudes reportedly triggered a cerebral hemorrhage, which caused her death.[10]

Monroe was a member of the Eagle's Nest Art Colony in Ogle County, Illinois, and is mentioned in Erik Larson's The Devil in the White City.

Monroe was the sister-in-law of Chicago architect John Wellborn Root, and wrote his biography.[11]