In December 1972, as one of the crew on board Apollo 17, Schmitt became the first member of NASA's first scientist-astronaut group to fly in space. As Apollo 17 was the last of the Apollo missions, he also became the twelfth person to set foot on the Moon, and as of 2015[update], the second-to-last person to step off of the Moon (he boarded the Lunar Module shortly before commander Eugene Cernan). Schmitt also remains the first and only professional scientist to have flown beyond low Earth orbit and to have visited the Moon.[1] He was influential within the community of geologists supporting the Apollo program and, before starting his own preparations for an Apollo mission, had been one of the scientists training those Apollo astronauts chosen to visit the lunar surface.

Schmitt resigned from NASA in August 1975 in order to run for election to the United States Senate as a member from New Mexico. As the Republican candidate in the 1976 election, he defeated the two-term Democrat incumbent Joseph Montoya, but, running for re-election in 1982, was himself defeated, by Democrat Jeff Bingaman.

Born in Santa Rita, New Mexico, Schmitt grew up in nearby Silver City,[2] and he is a graduate of the Western High School (class of 1953). He received a B.S. degree in geology from the California Institute of Technology in 1957 and then spent a year studying geology at the University of Oslo in Norway.[2][3][4] He received a Ph.D. in geology from Harvard University in 1964, based on his geological field studies in Norway.[2]

Before joining NASA as a member of the first group of scientist-astronauts in June 1965, he worked at the U.S. Geological Survey's Astrogeology Center at Flagstaff, Arizona, developing geological field techniques that would be used by the Apollo crews. Following his selection, Schmitt spent his first year at Air Force UPT learning to become a jet pilot. Upon his return to the astronaut corps in Houston, he played a key role in training Apollo crews to be geologic observers when they were in lunar orbit and competent geologic field workers when they were on the lunar surface. After each of the landing missions, he participated in the examination and evaluation of the returned lunar samples and helped the crews with the scientific aspects of their mission reports.

Schmitt spent considerable time becoming proficient in the CSM and LM systems. In March 1970 he became the first of the scientist-astronauts to be assigned to space flight, joining Richard F. Gordon, Jr. (Commander) and Vance Brand (Command Module Pilot) on the Apollo 15 backup crew. The flight rotation put these three in line to fly as prime crew on the third following mission, Apollo 18. When Apollo flights 18 and 19 were cancelled in September 1970, the community of lunar geologists supporting Apollo felt so strongly about the need to land a professional geologist on the Moon, that they pressured NASA to reassign Schmitt to a remaining flight. As a result, Schmitt was assigned in August 1971 to fly on the last mission, Apollo 17, replacing Joe Engle as Lunar Module Pilot. Schmitt landed on the Moon with commander Gene Cernan in December 1972.[5]

Schmitt claims to have taken the photograph of the Earth known as The Blue Marble, one of the most widely distributed photographic images in existence. (NASA officially credits the image to the entire Apollo 17 crew.)

While on the Moon's surface, Schmitt — the only geologist in the astronaut corps — collected the rock sample designated Troctolite 76535, which has been called "without doubt the most interesting sample returned from the Moon".[6] Among other distinctions, it is the central piece of evidence suggesting that the Moon once possessed an active magnetic field.[7]

As he returned to the Lunar Module before Cernan, Schmitt is the next-to-last person to have walked on the Moon's surface.

After the completion of Apollo 17, Schmitt played an active role in documenting the Apollo geologic results and also took on the task of organizing NASA's Energy Program Office. 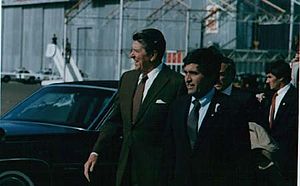 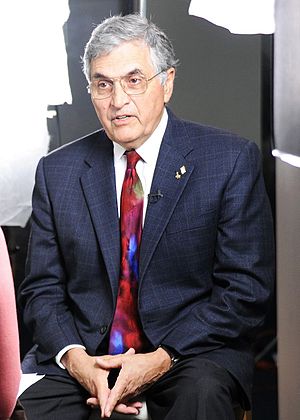 In August 1975, Schmitt resigned from NASA to seek election as a Republican to the United States Senate representing New Mexico in the 1976 election. Schmitt faced two-term Democratic incumbent, Joseph Montoya, whom he defeated 57% to 42%. He served one term and, notably, was the ranking Republican member of the Science, Technology, and Space Subcommittee. He sought a second term in the 1982, but due to a deep recession and concerns that he wasn't paying attention to local matters, he was defeated in a re-election bid by the state Attorney General Jeff Bingaman by a 54% to 46% margin. Bingaman's campaign slogan asked, "What on Earth has he done for you lately?"[8] Following his Senate term, Schmitt has been a consultant in business, geology, space, and public policy.

During his term in the Senate, Schmitt sat at the chamber's candy desk.

Schmitt is an adjunct professor of engineering physics at the University of Wisconsin–Madison,[9] and has long been a proponent of lunar resource utilization.[10][11] In 1997 he proposed the Interlune InterMars Initiative, listing among its goals the advancement of private sector acquisition and use of lunar resources, particularly lunar helium-3 as a fuel for notional nuclear fusion reactors.[12]

Schmitt was chair of the NASA Advisory Council, whose mandate is to provide technical advice to the NASA Administrator, from November 2005 until his abrupt resignation on October 16, 2008.[13] In November 2008, he quit the Planetary Society over policy advocacy differences, citing the organization's statements on "focusing on Mars as the driving goal of human spaceflight" (Schmitt said that going back to the Moon would speed progress toward a manned Mars mission), on "accelerating research into global climate change through more comprehensive Earth observations" (Schmitt voiced objections to the notion of a present "scientific consensus" on climate change as any policy guide), and on international cooperation (which he felt would retard rather than accelerate progress), among other points of divergence.[14]

In January, 2011, he was appointed as Secretary of the New Mexico Energy, Minerals and Natural Resources Department in the cabinet of Governor Susana Martinez,[15] but was forced to give up the appointment the following month after refusing to submit to a required background investigation.[16] El Paso Times called him the "most celebrated" candidate for New Mexico energy secretary.[17]

Schmitt wrote a book entitled "Return to the Moon: Exploration, Enterprise, and Energy in the Human Settlement of Space" in 2006.[18]

He lives in Silver City, New Mexico, and spends some of his summer at his northern Minnesota lake cabin.

Schmitt's view on climate change diverges from the prevailing scientific opinion on climate change as he emphasizes natural over human factors as driving climate. In repeated comments, Schmitt has expressed his view that the risks posed by climate change are overrated, and suggests instead that climate change is a tool for people who are trying to increase the size of government.[20] He resigned his membership in the Planetary Society because of its stance on the subject, writing in his resignation letter that the "global warming scare is being used as a political tool to increase government control over American lives, incomes and decision-making." He spoke at the March 2009 International Conference on Climate Change sponsored by the Heartland Institute.[21] He appeared in December that year on the Fox Business Network, saying "[t]he CO2 scare is a red herring".[22]

In a 2009 interview with libertarian talk-radio host Alex Jones, Schmitt asserted a link between Soviet Communism and the American environmental movement: "I think the whole trend really began with the fall of the Soviet Union. Because the great champion of the opponents of liberty, namely communism, had to find some other place to go and they basically went into the environmental movement."[23] At the Heartland Institute's sixth International Conference on Climate Change Schmitt said that climate change was a stalking horse for National Socialism.[24]

Schmitt co-authored a May 8, 2013 Wall Street Journal opinion column with William Happer, contending that increasing levels of carbon dioxide in the atmosphere are not significantly correlated with global warming, attributing the "single-minded demonization of this natural and essential atmospheric gas" to advocates of government control of energy production. Noting a positive relationship between crop resistance to drought and increasing carbon dioxide levels, the authors argued, "Contrary to what some would have us believe, increased carbon dioxide in the atmosphere will benefit the increasing population on the planet by increasing agricultural productivity."[25] 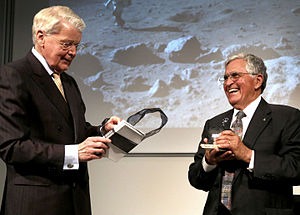 Schmitt is one of the astronauts featured in the documentary In the Shadow of the Moon. He also contributed to the book NASA's Scientist-Astronauts by David Shayler and Colin Burgess.