Harrow /ˈhæroʊ/[2] is a large suburban town in the London Borough of Harrow, northwest London, England. It is centred 10.5 miles (16.9 km) northwest of Charing Cross. Harrow-on-the-Hill includes the conservation area with a high proportion of listed buildings with a residential and institutional array of Georgian architecture and a few 17th century examples. Harrow gives its initial letters to a wider postcode area. The administrative offices of the borough are in the town which currently is made up of the Greenhill, Headstone South and West Harrow electoral wards; these had a population of 33,928 in the 2011 census. Harrow was a municipal borough of Middlesex before its inclusion in Greater London in 1965. Harrow is home to a large University of Westminster campus and its oldest secondary schools are Harrow School and Harrow High School.

Harrow's name comes from Old English hearg = "(heathen) temple", which was probably on the hill of Harrow, where St. Mary's Church stands today.[3] The name has been studied in detail by Briggs.[4]

The first and only contemporary artist-led gallery in Harrow was set up in 2010 by the Usurp Art Collective. The space is called the Usurp Art Gallery & Studios and is based in West Harrow, a bohemian part of Harrow. Usurp Art provides professional support to artists and runs the only public artists studios in the borough. It is a flagship project for Arts Council England.[5][6][7][8]

Main article: Harrow on the Hill

Harrow proper is identified as one of the 11 Metropolitan centres in the London Plan. 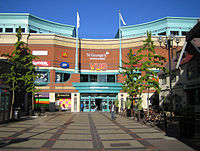 Harrow historically included Harrow on the Hill, which sits on top of an outlying knoll and is contiguous with the centre of Harrow. Much of Kenton and before 1716 all of Pinner were parts of Harrow, geographical facts which root the importance of Harrow as a meeting place and a place of business. Harrow Weald, is the district north of Wealdstone, both of which were historically also part of Harrow. Harrow may also include the wards of Roxeth, Marlborough, Headstone North and Harrow on the Hill as well as the Greenhill, West Harrow and Headstone South wards listed above. The combined population of these wards is 80213 (2011).

Major employers include Kodak Alaris, the Royal National Orthopaedic Hospital and Ladbrokes, which has its headquarters in Harrow.[9] 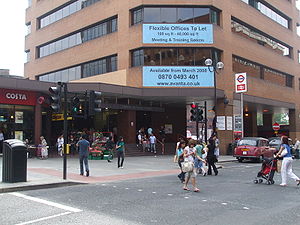 On 7 August 1838 Thomas Port died from injuries received in a train accident near Harrow. His gravestone in the parish churchyard of St Mary's, Harrow-on-the-Hill, states: "To the memory of Thomas Port, son of John Port of Burton-upon-Trent in the County of Stafford, Hat Manufacturer, who near this town had both legs severed from his body by the railway train. With great fortitude, he bore a second amputation by the surgeons and died from loss of blood, August 7th 1838, aged 33 years."

On 8 October 1952 three trains collided at Harrow and Wealdstone station, killing 112 people. Of the dead, 64 were railway employees on their way to work.

Harrow is twinned with: