Harry Augustus "Hal" Garfield (October 11, 1863 – December 12, 1942) was an American lawyer, academic and public official. He was president of Williams College and supervised the Federal Fuel Administration during World War I.

Garfield was the son of President James A. Garfield and First Lady Lucretia Garfield, and the brother and law partner of Secretary of the Interior James Rudolph Garfield. At the age of 17 he and his 15-year-old brother James watched in horror as their father was shot down by assassin Charles Guiteau. 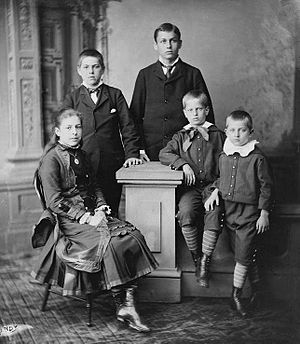 Harry A. Garfield (third from the left) and siblings. 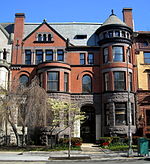 After graduating from Williams College in 1885, he went on to study law at Columbia Law School, spending his second year reading law at All Soul's College in Oxford and the Inns Court in London.[1] He taught Roman history and Latin for a year in St. Paul's School, Concord, New Hampshire, and from 1888 to 1903 practiced law in Cleveland. He was professor of contracts in the law school of Western Reserve University from 1891 to 1897, and in 1896 helped to organize the municipal association of Cleveland, where he also served as president of the Chamber of Commerce from 1908 to 1909. He was professor of politics at Princeton University from 1903 to 1908. While at Princeton, he befriended future president Woodrow Wilson. In 1908, Garfield became a law professor and eighth president of his alma mater, Williams College in Massachusetts. He was president of the American Political Science Association from 1921 to 1922.

He was a hereditary companion of the Ohio Commandery of the Military Order of the Loyal Legion of the United States by right of his father's service as an major general in Union Army during the American Civil War.

In 1917, President Woodrow Wilson asked him to run the nation's Federal Fuel Administration during World War I. Garfield's duty was to conserve the coal supply and keep the price within reasonable bounds. Local committees were appointed throughout the country to study local conditions and their reports formed the basis for the prices fixed in different localities. The ensuing winter was unusually severe, and serious shortage of coal threatened. Because of the shortage of coal in the northeastern United States, especially in New York City and Ohio, Garfield's administration of the office was severely criticized in the press, but an investigation by the United States Congress showed that the shortage was due to failure of the railroads to meet the extra demands upon them, and federal control of the roads was instituted on December 28, 1917. Garfield also issued his “idle Mondays” order in January 1918, which closed non-essential industries for five consecutive days beginning January 18 and on every Monday thereafter up to March 25. This roused a storm of protest from many manufacturers, and the U.S. Senate voted a resolution, requesting postponement, but this reached him after the order had been signed. On February 14, however, the order was suspended and priority for certain shipments substituted. He disapproved of the method of settling the coal strike in December 1919 and resigned his office, resuming that of president of Williams College.

Garfield married his second cousin, Belle Hartford Mason, and had four children by her. He is buried in the faculty cemetery at Williams College.