He was inducted into the U.S. Army on May 5, 1953. He went to the Southwestern Signal Corps Training Center at Camp San Luis Obispo, California to study cryptography. On October 4, 1953, he was sent to Bikini Atoll in the Marshall Islands, where the 1954 Operation Castle hydrogen bomb tests were conducted.

Browne worked as an advertising and sales executive in the 1960s. He then devoted himself full-time to the "Americanist" cause. He believed that the newspapers of America would willingly buy material promoting the American way of life; so, in 1961 he took on the proprietorship of American Way Features, Inc., a newspaper feature service, and as managing editor inaugurated a plan to turn the service from a subsidized program into a profit-making service. It sold "Americanist" features, in competition with all the recognized syndicates. His own column, The American Way, appeared in over 200 newspapers throughout America.

In the summer of 1962, Browne was named the advertising manager for the Liberty Amendment Committee's bimonthly American Progress for Economic Freedom. In October he was named associate editor, and in November he was the editor. The following Spring the magazine was renamed Freedom Magazine, and Browne continued as its editor until February 1964 when he turned his full-time attention to the American Way Features, Inc.

Also in the 1960s, Browne taught courses such as: The Economics of Freedom, The Tools of Success, Tools of the Market, The Economics of Success, and The Art of Profitable Living". Browne was an investment advisor for much of his life, and developed the so-called "permanent portfolio" investment strategy, which claims to identify the four types of economic conditions that can apply over a given investment period, and the appropriate asset classes that give both profit from the upside of these conditions, and some measure of protection when they cease to prevail.

Browne published his first book, How You Can Profit From The Coming Devaluation, in 1970. Browne's second book, How I Found Freedom in an Unfree World, was published in 1973. You Can Profit from a Monetary Crisis was Browne's third book. He continued to write and publish books including his personal finance book, Fail-Safe Investing: Lifelong Financial Security in 30 Minutes, published in 2001.[3] According to Browne's web site, he was a consultant to the Permanent Portfolio Fund which utilizes some of the investment strategies described in his book, Fail-Safe Investing.[4] Browne also authored books and gave lectures on actively living a libertarian lifestyle. His book How I Found Freedom in an Unfree World gave a detailed explanation of how one can bring libertarian concepts to every aspect of one's life. His posthumously released 1960s lecture series, "The Art of Profitable Living," was released as a 20-CD album titled, "Rule Your World." 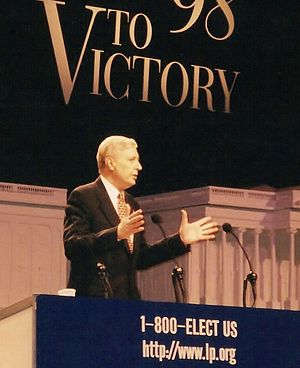 Browne speaking at the 1998 Libertarian National Convention in Arlington, Virginia.

His campaign qualified for matching funds during each election but did not accept them, per his campaign platform.[5] Browne's refusal to accept matching funds won him expected praise from libertarians and those who are against the concept of federal matching funds, but also earned him somewhat greater exposure in the "mainstream" media. Browne said he needed to be true to what he had preached in his libertarian speeches and that "it would be highly inappropriate for me to stick my nose in the trough after having denounced the Republicans and Democrats for doing so." During both of these elections, the Libertarian Party was on the ballot in all fifty states and the District of Columbia. Browne did not appear on the 2000 Arizona ballot, however, as the Arizona Libertarian Party instead chose to run L. Neil Smith, whose candidacy was a protest against that of Browne.

Claims of wrongdoing by Libertarian National Committee staffers during Browne's 1996 presidential campaign surfaced during his second run in 2000. Browne responded to allegations surrounding the controversy.[6]

After the 2000 election, Browne continued to work to increase the popularity of libertarian goals. In addition to writing and making appearances on behalf of the Downsize DC Foundation (an organization he helped to co-found and for which he served as director of public policy for a year and a half), he hosted two weekly network radio shows,[7] one on Saturdays dealing with politics, which he often called "The Libertarian Conversation" (since listeners were encouraged to call in), and the other on Sundays, called "The Money Show", dealing with financial topics. Both of these radio programs were on the Genesis Communications Network. Browne also worked with the Free Market News Network, of which he was the president for much of 2005, and a senior political analyst. Via Free Market News, he had his own internet-based television show called This Week in Liberty, which ran for 25 episodes.

Prior to his death, he was also working on a book called The War Racket: The Lies, Myths, and Propaganda that Feed the American War Machine. War, he contended, was just another government program, and was essentially flawed because "government never solves anything." According to Jim Babka, "As Harry explained to me, the book was unlike any other he had ever written. Harry was well-read in his history, but after starting on the project he realized that 'well-read' wasn't enough." According to Browne's wife, Pamela, he collected over 400 books, read almost all of them, and made copious notes. He was struggling with the book's structure at the time of his death.[8]

Browne also authored thousands of articles and was a contributor to the news and opinion blog LewRockwell.com, to Antiwar.com, and to World Net Daily. He published the financial newsletter Harry Browne Special Reports from 1974 to 1997.[9]

Since his death, Harry's wife Pamela has put together several collections of his speeches and writings in audio and e-book format.