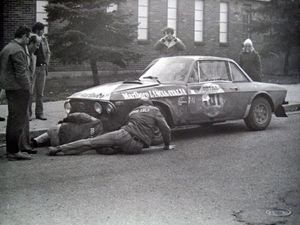 Partnered with Claes-Göran Andersson, and driving a Datsun 160J, he took his only World Rally Championship victory at the 1976 Acropolis Rally Greece. At the same rally and in the same car, he finished third in 1977 and 1979.

His fourth podium appearance in the world championship was a second place at the 1973 Safari Rally in a Datsun 1800 SSS. This was the first WRC event to end in a dead heat; he and Shekhar Mehta ended on the same penalty points (6 hours and 46 minutes) but Mehta was awarded the win due to being the fastest in the opening stages. At the 1985 Rallye Côte d'Ivoire, Toyota teammates Juha Kankkunen and Björn Waldegård repeated this feat.[1]