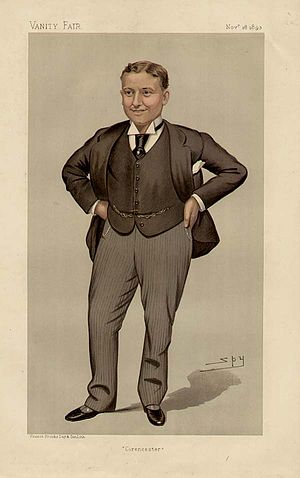 Harry Lawson Webster Levy-Lawson, 1st Viscount Burnham GCMG, CH, TD, JP, DL, (18 December 1862 – 20 July 1933) was a British newspaper proprietor and a Liberal Unionist politician who sat in the House of Commons between 1885 and 1916 when he inherited his peerage.

Levy-Lawson was born at St. Pancras, London, the son of Edward Levy-Lawson, 1st Baron Burnham and his wife Harriette Georgiana Webster. His name was legally changed from Levy to Levy-Lawson on 11 December 1875. He was educated at Cheam School, Headley, Berkshire, Eton and Balliol College, Oxford. He became a lieutenant in the Royal Buckinghamshire Yeomanry, treasurer of the Free Land League, vice president of the Municipal Reform League, and a member of the Executive Committee of Municipal Federation League.[1] In 1891, he was admitted to the Inner Temple, entitling him to practice as a barrister.[2]

Levy-Lawson was appointed a Captain in the Royal Buckinghamshire Yeomanry in 1887, and later gained the honorary rank of Major. He later served in the First World War, where he gained the rank of Lieutenant-Colonel and was mentioned in despatches. In 1916 on the death of his father he succeeded to the titles of Baron Burnham and the baronetcy and took his seat in the House of Lords. He also succeeded his father in the management and ownership of the Daily Telegraph. He was decorated with the Territorial Decoration (TD) and became Honorary Colonel of the 99th (Bucks and Berks Yeomanry) Brigade, Royal Artillery. He was invested as a Companion of Honour (CH) in 1917 and was created 1st Viscount Burnham of Hall Barn in the County of Buckingham, on 16 May 1919. He was a JP for Buckinghamshire. He received a number of honorary doctorates from McGill University, Montreal in 1920, Durham University in 1921 Athens University, Greece in 1924, University of Western Australia, Perth, Australia in 1925, Ghent University, Belgium, in 1927 and Cambridge University. He was invested as a Knight Grand Cross, GCMG in 1927. In 1928 he sold the Daily Telegraph to Lord Camrose.[2]

When he died, aged 70, Levy-Lawson had no surviving male issue and the viscountcy became extinct. His younger brother succeeded to the baronetcy and barony. He was buried on 24 July 1933 at Beaconsfield, Buckinghamshire