The Hartford Courant is the largest daily newspaper in the U.S. state of Connecticut, and is often recognized as the oldest continuously published newspaper in the United States. A morning newspaper serving most of the state north of New Haven and east of Waterbury, its headquarters on Broad Street are a short walk from the state capitol. It reports regional news with a chain of bureaus in smaller cities and a series of local editions. Beginning in 2000, it was owned by Tribune Company, which later combined the paper's management and facilities with those of Tribune-owned WTIC-TV in Hartford. In 2014, the newspapers were spun off to corporate parent Tribune Publishing.

The Connecticut Courant began as a weekly on October 29, 1764, started by Thomas Green.[2][3][4] The word "courant", borrowed from the Dutch, was a popular name for English-language newspapers. The daily Hartford Courant traces its existence back to the weekly, thereby claiming the title "America's oldest continuously published newspaper" and adopting as its slogan, "Older than the nation." (The New Hampshire Gazette, which started publication in 1756 and all but disappeared into other publications for most of a century, trademarked the title of oldest paper in the nation after being revived as a small biweekly in 1989. See also the New York Post as oldest daily, and Time magazine's view of "oldest" claims.[5])

Joseph Roswell Hawley, A leading Republican politician and former governor of the state, in 1867 bought the newspaper, which he combined with the Press. Under his editorship, this became the most influential newspaper in Connecticut and one of the leading Republican papers in the country.

Emile Gauvereau became a reporter in 1916, and the managing editor in 1919. His energetic and often sensational news policies affronted Charles Clark, the owner and editor. Clark fired him when he refused to stop a series of stories about the exploitation of fake medical diplomas.

Herbert Brucker was the most prominent editor in the 20th century.[6]

The Courant was purchased in 1979 by Times Mirror, the Los Angeles Times' parent company. The first years of out-of-town ownership are described by a former Courant reporter in a book titled Spiked: How Chain Management Corrupted America's Oldest Newspaper. [7] One criticism was that the new owners were more interested in awards, and less interested in traditional Courant devotion to exhaustive coverage of local news.

The Courant won a 1992 Pulitzer Prize for inquiring into problems with the Hubble Space Telescope (a Connecticut company was involved in the construction), and it won a 1999 Pulitzer Prize in the Breaking News category for coverage of a 1998 murder-suicide that took five lives at Connecticut Lottery headquarters. A series of articles about sexual abuse by the head of a worldwide Catholic order, published since February 1997, constituted the first denunciation of Marciel Maciel known to a wider audience.[8][9] 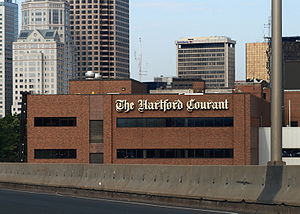 The current building of the Hartford Courant Co.

In 2000, Times Mirror and the Courant became part of the Tribune Company, one of the world's largest multimedia companies. Ironically, along the way, the Courant also acquired the Valley Advocate group of "alternative" weeklies started by two disgruntled Courant staff members in 1973. Under new ownership, it is co-owned with two local television stations: Fox affiliate WTIC-TV and The CW affiliate WCCT-TV.

The Courant is the most recent American newspaper to win the Society for News Design's World's Best Designed Newspaper award (awarded in 2005).[10] In 2006, the paper's investigation into mental health and suicides among Americans serving in the Iraq war was featured in the PBS documentary series Exposé: America's Investigative Reports in an episode entitled "Question 7".

In late June 2006, the Tribune Co. announced that Courant publisher Jack W. Davis Jr. would by replaced by Stephen D. Carver, vice president and general manager of Atlanta, Ga., TV station WATL. In March 2009, Tribune replaced Carver with Richard Graziano, who was given a dual role as Courant publisher and general manager of Tribune's two Hartford television statons.[citation needed] In May of the same year, Tribune announced that Jeff Levine, a newspaper executive with a background in marketing, would become "director of content" and that the editor or "print platform manager" of the Courant would report to Levine as would the news director of WTIC-TV. Shortly after that, the Courant's two highest ranking editors were let go.[11][12]

After 2010, Courant has offered early retirement and buyout packages to reduce staff as it continues to experience declines in advertising revenue. There have also been layoffs and reduction in pages. Newsroom staff peaked in 1994 at close to 400 staff, down to 175 staff by 2008, and 135 staff in 2009.[13]

On Nov. 18, 2013 Tribune Company announced the appointment of Nancy Meyer as Publisher, succeeding Rich Graziano who left to become President/General Manager of WPIX-TV (PIX11) in New York City. In 2014, the Courant purchased the ReminderNews chain of weekly newspapers.[14]

On October 10, 2014 Tribune Company announced the appointment of Rick Daniels as publisher of the Hartford Courant, succeeding Nancy Meyer who was promoted to Publisher and CEO of the Orlando Sentinel. [15]

In its most recent endorsements for U.S. President, Connecticut Senator, and Connecticut Governor, the Courant endorsed the Democratic candidate each time. In all three cases, the state of Connecticut voted in agreement with the endorsement.

When two newspapers were published in Hartford, the Courant was editorially Republican and did not endorse a non-Republican for president until Bill Clinton. When the Hartford Times ceased publication in 1976, the Courant's editorial page took an independent stance. It has endorsed Republicans and Democrats.

While the Courant editorially has recently endorsed Republican presidential candidates, its editorial approach to state government in recent decades has traditionally been liberal and opposed to what it considers short-sighted conservatism. Its strong endorsement of former Senator Lowell Weicker was decisive in the 1990 gubernatorial election. It endorsed his Lieutenant Governor Eunice Groark for Governor in 1994. After Republican Governor John G. Rowland announced major development initiatives for downtown Hartford, the Courant endorsed his 1998 and 2002 re-election bids. In 2006 the Courant endorsed Democrat John DeStefano, Jr. for Governor, but he was defeated soundly by incumbent Governor M. Jodi Rell.

The Courant's long-time law firm, Tyler Cooper & Alcorn, also happened to be the Connecticut Republican Party's law firm. That business relationship with the Republican Party ended when Tyler Cooper lawyers fought aggressively on behalf of the Courant to uncover a police report about an alleged domestic incident at Rowland's Middlebury home.

In July 2006 the Courant weighed in on the contentious Connecticut Democratic senate primary by endorsing incumbent Joe Lieberman. The Courant also endorsed his bid in the general election.

In August 2009, the Courant attracted some controversy over its firing of George Gombossy, a 40-year veteran of the paper and its consumer advocate at the time. Gombossy charged that the Courant had spiked an article he had written about an ongoing investigation by the Connecticut attorney general accusing Sleepy's (a major advertiser in the paper) of selling used and bedbug-infested mattresses as new.[16][17][18]

Gombossy's lawsuit against the Courant was thrown out by a Connecticut Superior Court judge in July 2010. In his decision, Judge Marshall K. Berger, Jr. remarked that newspaper owners and editors have a "paramount" right to "control [the] content of their papers," further observing that in his role at the Courant, Gombossy had "no constitutional right to publish anything."[19]

However, Gombossy's attorneys filed a second complaint, and Judge Berger reinstated the complaint. The case headed to trial in the fall of 2011.

In September 2009 the Courant's publisher, Richard Graziano, publicly apologized as the newspaper accepted a plagiarism charge. Competitors had accused the Courant of taking its content without permission and refusing to give proper credit.[20][21]