From Infogalactic: the planetary knowledge core
Jump to: navigation, search
For the genus of beetles, see Haruspex (beetle). 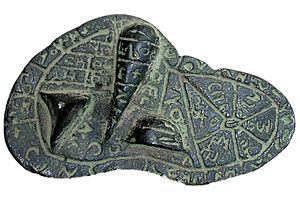 In the religion of Ancient Rome, a haruspex (plural haruspices) was a person trained to practice a form of divination called haruspicy (haruspicina) the inspection of the entrails (exta), hence also extispicy (extispicium) of sacrificed animals, especially the livers of sacrificed sheep and poultry. The reading of omens specifically from the liver is also known by the Greek term hepatoscopy (also hepatomancy).

The Roman concept is directly derived from Etruscan religion, as one of the three branches of the disciplina Etrusca. Haruspicy as practiced by the Romans and Etruscans has direct precedents in the religions of the Ancient Near East since at least the Middle Bronze Age (c. 2000 BC) and apparently reached Italy via Anatolian (Hittite, Luwian) transmission.

The Latin terms haruspex, haruspicina are from an archaic word haru "entrails, intestines" (cognate with hernia "protruding viscera", and hira "empty gut"; PIE *ǵʰer-) and from the root spec- "to watch, observe". The Greek ἡπατοσκοπία hēpatoskōpia is from hēpar "liver" and skop- "to examine".

Old Assyrian clay liver models recovered from the palace at Mari, dated to the 19th or 18th century BC.

The Babylonians were famous for hepatoscopy. This practice is mentioned in the Book of Ezekiel 21:21:

"For the king of Babylon stands at the parting of the way, at the head of the two ways, to use divination; he shakes the arrows, he consults the household idols, he looks at the liver."

The Nineveh library texts name more than a dozen liver-related terms. The liver was considered the source of the blood and hence the basis of life itself. From this belief, the Babylonians thought they could discover the will of the gods by examining the livers of carefully selected sheep. A priest known as a bārû was specially trained to interpret the "signs" of the liver, and Babylonian scholars assembled a monumental compendium of omens called the Bārûtu. The liver was divided into sections, with each section representing a particular deity.

One Babylonian clay model of a sheep's liver, dated between 1900 and 1600 BC, is conserved in the British Museum.[1] The model was used for divination, which was important to Mesopotamian medicine. This practice was conducted by priests and seers who looked for signs in the stars, or in the organs of sacrificed animals, to tell them things about a patient’s illness. Wooden pegs were placed in the holes of the clay tablet to record features found in a sacrificed animal's liver. The seer then used these features to predict the course of a patient's illness.

Haruspicy was part of a larger study of organs for the sake of divination, called extispicy, paying particular attention to the positioning of the organs and their shape. There are many records of different peoples using the liver and spleen of various domestic and wild animals to forecast weather. There are hundreds of ancient architectural objects, labyrinths composed of cobblestones in the northern countries that are considered to be a model of the intestines of the sacrificial animal, i.e. the colon of ruminants.

The Assyro-Babylonian tradition was also adopted in Hittite religion. At least thirty-six liver-models have been excavated at Hattusa. Of these, the majority are inscribed in Akkadian, but a few examples also have inscriptions in the native Hittite language, indicating the adoption of haruspicy as part of the native, vernacular cult.[2]

The Etruscans were also well known for the practice of divining by the entrails of sheep. A bronze sculpture of a liver known as the "Liver of Piacenza", dating to around 100 BC, was discovered in 1877 near the town of Piacenza in northern Italy. It is marked with the name of regions assigned to various deities of Etruscan religion.

The striking parallel not just of the prevalence of the practice of haruspicy, but the specific artefact type of liver models recording the significance of the various parts of the liver has given rise to the hypothesis of a strong cultural connection between Etruria and the Ancient Near East. From as early as 1900, Ludwig Stieda[citation needed] sought to compare the Etruscan with the Babylonian artefacts. The parallel is taken as one of the main pieces of evidence by those arguing for Etruscan origins in Anatolia, alongside Herodotus' (1.94) claim that the "Tyrrhenians" descended from the Lydians, and the linguistic relationship between Etruscan and Lemnian.[3]

The art of haruspicy was taught in the Libri Tagetici, a collection of texts attributed to Tages, a childlike being who figures in Etruscan mythology, and who was discovered in an open field by Tarchon; the Libri Tagetici were translated into Latin and employed in reading omens.

The continuity of the Etruscan tradition among the Romans is indicated by several ancient literary sources, perhaps most famously in the incident related by Suetonius[4] in which a haruspex named Spurinna warned Julius Caesar to beware the Ides of March.

The emperor Claudius was a student of the Etruscan language and antiquities, and opened a college to preserve and improve their art, which lasted until the reign of Theodosius I, the Christian emperor who dismantled the last active vestiges of the traditional state cult.[citation needed] Further evidence has been found of haruspices in Bath, England where the base of a statue dedicated by a haruspex named Memor.[citation needed]