Harvard College was founded in 1636 as a Puritan/Congregationalist institution and trained ministers for many years. The separate institution of the Divinity School, however, dates from 1816, when it was established as the first non-denominational divinity school in the United States. (Princeton Theological Seminary had been founded as a Presbyterian institution in 1812. Andover Theological Seminary was founded in 1807 by orthodox Calvinists who fled Harvard College after it appointed liberal theologian Henry Ware to the Hollis Professorship of Divinity in 1805.)

During its first century, Harvard Divinity School was unofficially associated with American Unitarianism.[1] However, it also retains a historical tie to one of the successor denominations of American Congregationalism, the United Church of Christ.

Throughout the 18th century, Enlightenment ideas of the power of reason and free will became widespread among Congregationalist ministers, putting those ministers and their congregations in tension with more traditionalist, Calvinist parties.[2]:1–4 When the Hollis Professor of Divinity David Tappan died in 1803 and the president of Harvard Joseph Willard died a year later, in 1804, the overseer of the college Jedidiah Morse demanded that orthodox men be elected.[3] Nevertheless, after much struggle the Unitarian Henry Ware was elected in 1805, which signaled the changing of the tide from the dominance of traditional, Calvinist ideas at Harvard to the dominance, of liberal, Arminian ideas (defined by traditionalists as Unitarian ideas).[2]:4–5[4]:24 The appointment of Ware, with the election of the liberal Samuel Webber to the presidency of Harvard two years later, led Jedidiah Morse and other conservatives to found the Andover Theological Seminary as an orthodox alternative to the Harvard Divinity School.[2]:4–5

Today, students and faculty come from a variety of religious backgrounds: Christian (all denominations), Jewish, Muslim, Hindu, Buddhist, Sikh, etc. Its academic programs attempt to balance theology and religious studies—that is, the "believer's" perspective on religion with the "secular" perspective on religion. This is in contrast to many other divinity schools where one or the other is given primacy (Yale Divinity School, for example, emphasizes its ministry program, while the majority of students at the University of Chicago Divinity School enroll in its "religious studies" Master of Arts program).

Harvard Divinity School is accredited by the Association of Theological Schools in the United States and Canada (ATS) and approved by ATS to grant the following degrees:[5]

In addition to candidates for the above, many Harvard graduate students pursuing PhDs in the study of religion work closely with Divinity School faculty. These students are formally affiliated with the Committee on the Study of Religion which is made up of 50% Arts and Sciences and 50% Divinity faculty members and housed in the Faculty of Arts and Sciences.

In April 2014, the Faculty of HDS voted to unify the ThD and PhD in the study of religion in the Graduate School of Arts and Sciences (GSAS), suspending admission to the ThD starting in fall 2015. Those previously admitted to the ThD program continue to be candidates for the ThD, with the first cohort of PhD candidates entering in fall 2015.[6] While many PhD students in the GSAS take courses at HDS, and admissions material from HDS advertises the PhD in the study of religion, PhD students are formally enrolled in the GSAS and not at HDS; only the GSAS at Harvard may award the PhD.

Candidates for the MTS choose among 18 areas of academic focus:

Candidates for the MDiv are required to take:

The Women's Studies in Religion Program (WSRP) at Harvard Divinity School was founded in 1973 and was the first program to focus on the interdisciplinary study of women and religion. Since its founding, it has supported more than 100 scholars, representing over 50 institutions of higher learning in the United States and around the world.

The WSRP promotes critical inquiry into the interaction between religion and gender, and every year the program brings five postdoctoral scholars to HDS. The research associates each work on a book-length research project and teach courses related to their research.

Center for the Study of World Religions

Founded in 1960 after an anonymous donation in 1957, the Center for the Study of World Religions at Harvard Divinity School is a residential community of academic fellows, graduate students, and visiting professors of many world religious traditions. The Center focuses on the understanding of religions globally through its research, publications, funding, and public programs. It welcomes scholars and practitioners, and highlights the intellectual and historical dimensions of religious dialogue. Its current director is Francis X. Clooney, SJ, a scholar of Hinduism and comparative theologian focusing on the Hindu and Catholic Christian traditions.The Center sponsors a diverse range of educative programs, ranging from public lectures to colloquia and reading groups, student-initiated projects, and “religion in the news” lunches on topics of public interest. The Center’s Meditation Room is used regularly by individuals and groups.

The building that houses the Center was designed by Josep Lluís Sert.

The Summer Leadership Institute (SLI), which has been discontinued, was a two-week training program that sought to establish theological instruction and grounding for individuals engaged in community and economic development.

The program of study was divided into four modules: Theology, Ethics, and Public Policy; Organizational Development and Management; Housing and Community Development; and Finance and Economic Development. As a full-time residential program, holding classes five days a week, the educational focus lies on faith-based case studies of corporations and communities.

Since the SLI's inauguration in 1998, more than 450 participants have completed the program. About 50 people were selected each year from around the United States and internationally to participate in lectures, seminars, and field visits with faculty from across Harvard and other recognized experts. Participants also developed individual plans of action, on a case-study model, applicable to the local work in their communities.

Program in Religion and Secondary Education

The Program in Religion and Secondary Education is a teacher education program that prepares students to teach about religion in public schools from a non-sectarian perspective. Students in the master of theological studies or master of divinity degree programs integrate their work in religion with courses on education and public policy to understand the relationship between religion and education and to advance religious literacy within their fields of licensure.

Harvard Divinity School's Program in Religious Studies and Education (PRSE) has been temporarily suspended, pending new permanent funding that will allow the program to continue and to be capable of serving more students than can currently be admitted into the program. Beginning with the 2009-10 academic year, no new students will be admitted to the program for at least the next two years. Students who are already in the PRSE will continue and be able to finish their degree in normal fashion. 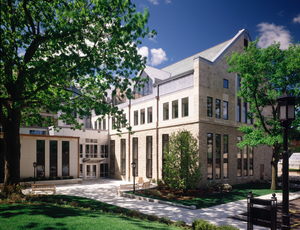 Andover-Harvard Theological Library was founded in 1836 and underwent expansion in 1911 when the collections of HDS and Andover Theological Seminary were combined. The Library is part of the larger Harvard University library system, which is available to all faculty, staff, and students at HDS. In September 2001, the library completed a $12-million renovation that enhanced its technology facilities and improved its information systems. Andover-Harvard participates in the Boston Theological Institute library program, which extends borrowing privileges to all members of the HDS community at any of the other BTI libraries.

Completed in 1911 at a cost of $300,000, Andover Hall was designed by Allen and Collens, a firm that focused largely on neo-medieval and ecclesiastical designs, and is the only building at Harvard built in the Collegiate Gothic style of architecture.[7]

Andover Hall was commissioned by Andover Theological Seminary, which, by 1906, saw its enrollment slide and entered an affiliation with the Divinity School in 1908. The Hall contained a chapel, library, dorms, and seminar and lecture rooms. Today, Andover Hall still contains a chapel and some classrooms, but it also holds many administrative and faculty offices.[7]

HD Today was an alumni/ae magazine published three times per year also by the HDS Office of Communications. It included original news articles, event listings, an alumni/ae journal, and class notes. It ceased publication in spring 2012.

Founded in 1908, Harvard Theological Review is a quarterly journal that publishes original research in many scholarly and religious fields, including ethics, archeology, Christianity, Jewish studies, and comparative religious studies.

The Wick is a journal for literary and creative works by the HDS community. The Wick publishes both published and unpublished writers of fiction, poetry, essays, photography, sermons, and creative non-fiction.

The Nave is an online electronic newsletter of HDS student activities and events. It includes announcements of lectures, social events, important academic deadlines, and other matters. The Boston Theological Institute, along with other schools in the area, provides students, staff and faculty numerous cultural and academic experiences, many of which are featured in The Nave.