Harveys Brewery is a brewery in Lewes, East Sussex, England.

Harvey's estate includes 48 tied houses, mostly in Sussex, and one in London, The Royal Oak, Southwark. It sells and distributes its main product, Sussex Best Bitter, to other pubs and social clubs in South East England. 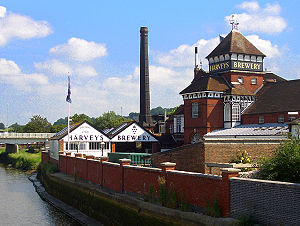 Harveys brewery as seen from the Cliffe Bridge in Lewes, East Sussex, July 2006

In 1880, part of the original Georgian brewery was rebuilt: the Tower and Brew House visible for example from Cliffe Bridge. This is an example of a country brewery with a façade in a rustic Neo-Gothic design of the Victorian era, a listed building at Grade II*.[1] Behind it stands another half: the Georgian fermenting room, cellars and Vat House. The fermenting room, Brew House and cellars have not changed in layout and dimensions, although reinforced and their contents have evolved. The Vat House was converted and expanded into the modern bottling process.

In 1984, a second brewing line was completed doubling production capacity from 25,000 to 50,000 barrels a year. The building for this plant has been added in front of the Tower in a similar Gothic style, such as an arched ironwork window.

Harveys is an independent family company: Harvey & Son (Lewes) Ltd. The seventh generation of John Harvey's descendants are among directors.

Although Harveys Brewery has traditionally omitted an apostrophe from its name and products, the newly designed pump badge (since 2010) for their Sussex Best Bitter includes one. At present this is the only known such usage.

Harveys produces both cask-conditioned and bottled ales. In both cases, there is a range which is always available ("all-year"), and then a selection of "seasonal" ales.

In 2005 and 2006, Harveys Best won the Best Bitter category at the Campaign for Real Ale (CAMRA) Great British Beer Festival.