Hashimoto's thyroiditis or chronic lymphocytic thyroiditis is an autoimmune disease in which the thyroid gland is attacked by a variety of cell- and antibody-mediated immune processes, causing primary hypothyroidism. It was the first disease to be recognized as an autoimmune disease.[1] It was first described by the Japanese specialist Hakaru Hashimoto in a paper published in Germany in 1912.

There are many symptoms that are attributed to Hashimoto's thyroiditis or Hashimoto's disease. The most common symptoms include the following: fatigue, weight gain, pale or puffy face, feeling cold, joint and muscle pain, constipation, dry and thinning hair, heavy menstrual flow or irregular periods, depression, panic disorder, a slowed heart rate, and problems getting pregnant and maintaining pregnancy.

Hashimoto’s disease is about seven times more common in women than in men. It can occur in teens and young women, but more commonly shows up in middle age, particularly for men. People who develop Hashimoto’s disease often have family members who have thyroid or other autoimmune diseases, and sometimes have other autoimmune diseases themselves.[2]

The thyroid gland may become firm, large, and lobulated in Hashimoto's thyroiditis, but changes in the thyroid can also be nonpalpable.[3] Enlargement of the thyroid is due to lymphocytic infiltration and fibrosis rather than tissue hypertrophy. Physiologically, antibodies against thyroid peroxidase (TPO) (also called TPOAb) and/or thyroglobulin cause gradual destruction of follicles in the thyroid gland. Accordingly, the disease can be detected clinically by looking for these antibodies in the blood. It is also characterized by invasion of the thyroid tissue by leukocytes, mainly T-lymphocytes. A rare but serious complication is thyroid lymphoma, generally the B-cell type, non-Hodgkin lymphoma.[4]

A family history of thyroid disorders is common, with the HLA-DR5 gene most strongly implicated conferring a relative risk of 3 in the UK. In addition Hashimoto's thyroiditis may be associated with CTLA-4 (Cytotoxic T-lymphocyte Antigen-4) gene polymorphisms that result in reduced functioning of the gene's products, which are associated with negative regulation of T-lymphocyte activity.[5] Downregulatory gene polymorphisms affecting CTLA4 are also associated with autoimmune pathology seen in development of type I diabetes.[6] The strong genetic component underscoring this theory is borne out in studies on monozygotic twins, with a concordance of 38-55%, with an even higher concordance of circulating thyroid antibodies not in relation to clinical presentation (up to 80% in monozygotic twins). Neither result was seen to a similar degree in dizygotic twins, offering strong favour for high genetic aetiology.[7]

Preventable environmental factors, including high iodine intake, selenium deficiency, as well as infectious diseases and certain drugs, have been implicated in the development of autoimmune thyroid disease in genetically predisposed individuals.[8] The genes implicated vary in different ethnic groups and the incidence is increased in patients with chromosomal disorders, including Turner, Down's, and Klinefelter syndromes usually associated with autoantibodies against thyroglobulin and thyroperoxidase. Progressive depletion of these cells as the cytotoxic immune response leads to higher degrees of primary hypothyroidism, presenting with a poverty of T3/T4 levels, and compensatory elevations of TSH.

Recent research suggests a potential role for HHV-6 (possibly variant A) in the development or triggering of Hashimoto's thyroiditis.[9]

There are multiple suggested mechanisms by which the pathology of Hashimoto's thyroiditis develops.

Various autoantibodies may be present against thyroid peroxidase, thyroglobulin and TSH receptors, although a small percentage of patients may have none of these antibodies present. As indicated in various twin studies a percentage of the population may also have these antibodies without developing Hashimoto's thyroiditis. Nevertheless, antibody-dependent cell-mediated cytotoxicity is a substantial factor behind the apoptotic fall-out of Hashimoto's thyroiditis. Activation of cytotoxic T-lymphocytes (CD8+ T-cells) in response to cell-mediated immune response affected by helper T-lymphocytes (CD4+ T-cells) is central to thyrocyte destruction. As is characteristic of type IV hypersensitivities, recruitment of macrophages is another effect of the helper T-lymphocyte activation, with Th1 axis lymphocytes producing inflammatory cytokines within thyroid tissue to further macrophage activation and migration into the thyroid gland for direct effect.[citation needed]

Gross morphological changes within the thyroid are seen in the general enlargement which is far more locally nodular and irregular than more diffuse patterns (such as that of hyperthyroidism). While the capsule is intact and the gland itself is still distinct from surrounding tissue, microscopic examination can provide a more revealing indication of the level of damage.[10]

Histologically, the hypersensitivity is seen as diffuse parenchymal infiltration by lymphocytes, particularly plasma B-cells, which can often be seen as secondary lymphoid follicles (germinal centers, not to be confused with the normally present colloid-filled follicles that constitute the thyroid). Atrophy of the colloid bodies is lined by Hürthle cells, cells with intensely eosinophilic, granular cytoplasm, a metaplasia from the normal cuboidal cells that constitute the lining of the thyroid follicles. Severe thyroid atrophy presents often with denser fibrotic bands of collagen that remains within the confines of the thyroid capsule.[11]

Diagnosis is usually made by detecting elevated levels of anti-thyroid peroxidase antibodies (TPOAb) in the serum, but seronegative (without circulating autoantibodies) thyroiditis is also possible.[12]

Given the relatively non-specific symptoms of initial hypothyroidism, Hashimoto's thyroiditis is often misdiagnosed as depression, cyclothymia, PMS, chronic fatigue syndrome, fibromyalgia and, less frequently, as erectile dysfunction or an anxiety disorder. On gross examination, there is often presentation of a hard goitre that is not painful to the touch;[10] other symptoms seen with hypothyroidism, such as periorbital myxedema, depend on the current state of progression of the response, especially given the usually gradual development of clinically relevant hypothyroidism. Testing for thyroid-stimulating hormone (TSH), free T3, free T4, and the anti-thyroglobulin antibodies (anti-Tg), anti-thyroid peroxidase antibodies (anti-TPO, or TPOAb) and anti-microsomal antibodies can help obtain an accurate diagnosis.[13] Earlier assessment of the patient may present with elevated levels of thyroglobulin owing to transient thyrotoxicosis, as inflammation within the thyroid causes damage to the integrity of thyroid follicle storage of thyroglobulin; TSH is increased as the pituitary tries to compensate for decreased T4 .[citation needed] 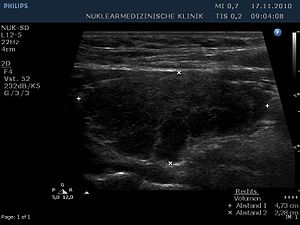 This exposure of the body to substantial amounts of previously isolated thyroid enzymes is thought to contribute to the exacerbation of tolerance breakdown, giving rise to the more pronounced symptoms seen later in the disease. Lymphocytic infiltration of the thyrocyte-associated tissues often leads to the histologically significant finding of germinal center development within the thyroid gland.

Hashimoto's when presenting as mania is known as Prasad's syndrome after Ashok Prasad, the psychiatrist who first described it.[14]

Hypothyroidism caused by Hashimoto's thyroiditis is treated with thyroid hormone replacement agents such as levothyroxine, triiodothyronine or desiccated thyroid extract. A tablet taken once a day generally keeps the thyroid hormone levels normal. In most cases, the treatment needs to be taken for the rest of the patient's life. In the event that hypothyroidism is caused by Hashimoto's thyroiditis, it is recommended that the TSH levels be kept under 3.0.[15]

Although the current clinical practice guidelines for hypothyroidism in adults do not indicate selenium supplementation,[16] a 1-year study of 46 patients found supplementing 80 μg per day of selenium slowed several markers of disease progression.[17] Another study comparing 100 μg and 200 μg doses of selenium combined with levothyroxine in 88 female patients over 9 months found that 200 μg was more effective.[18] A 2013 systemic review found there is still not enough evidence to definitively support or refute the efficacy of selenium for Hashimoto's thyroiditis, and urges more clinical trials are needed before efficacy can be proven.[19]

As a dietary supplement, the FDA recommends at least 55 μg per day of selenium for adults with a tolerable upper intake level of 400 μg.[20]

According to a study published in 2013, near-infrared low level laser therapy has been shown to be effective in phase two clinical trials at improving thyroid function.[21]

Overt, symptomatic thyroid dysfunction is the most common complication, with about 5% of patients with subclinical hypothyroidism and chronic autoimmune thyroiditis progressing to thyroid failure every year. Transient periods of thyrotoxicosis (over-activity of the thyroid) sometimes occur, and rarely the illness may progress to full hyperthyroid Graves' disease with active orbitopathy (bulging, inflamed eyes). Rare cases of fibrous autoimmune thyroiditis present with severe dyspnea (shortness of breath) and dysphagia (difficulty swallowing), resembling aggressive thyroid tumors - but such symptoms always improve with surgery or corticosteroid therapy. Primary thyroid B cell lymphoma affects fewer than one in a thousand patients, and it is more likely to affect those with long-standing autoimmune thyroiditis.[22]

This disorder is believed to be the most common cause of primary hypothyroidism in North America; as a cause of non-endemic goiter, it is among the most common.[23] An average of 1 to 1.5 in 1000 people have this disease.[23] It occurs between eight and fifteen times more often in women than in men. Though it may occur at any age, including in children, it is most often observed in women between 30 and 60 years of age.[22] It is more common in regions of high iodine dietary intake, and among people who are genetically susceptible.[22]

Also known as Hashimoto's disease, Hashimoto's thyroiditis is named after the Japanese physician Hakaru Hashimoto (1881−1934) of the medical school at Kyushu University,[24] who first described the symptoms of patients with struma lymphomatosa, an intense infiltration of lymphocytes within the thyroid, in 1912 in a German publication.[25] The report gave new insight into a condition (hypothyroidism) more commonly seen in areas of iodine deficiency that was occurring in the developed world, and without evident causation by dietary deficiency.

Pregnancy challenges thyroid function, putting additional pressure on the organ to function properly. In pregnant women who are positive for Hashimoto's thyroiditis, this challenge can lead the thyroid either to have decreased functionality or to fail entirely.[26] Pregnant mothers who are at a risk for Hashimoto's thyroiditis or who have been diagnosed as TPOAb-positive should be aware of the risks to themselves and their fetuses if the disease goes untreated. "Thyroid peroxidase antibodies (TPOAb) are detected in 10% of pregnant women," which presents risks to those pregnancies.[26] Risk factors are primarily indicated for women whose low thyroid function has not been stabilized by medication. These factors include: low birth weight, neonatal respiratory distress and fetal abnormalities (such as hydrocephalus and hypospadias), miscarriage, and preterm delivery.[26][27] When Hashimoto's thyroiditis is medicated through levothyroxine replacement, embryo implantation rate and pregnancy outcome are improved.[27] The 2012 study by Lepoutre et al. supports not only treating pregnant women who are TPOAb-positive throughout the entirety of their pregnancies, but their research also strongly recommends universal screening of thyroid levels for pregnant women.[26] They also recommend consistent cooperation between obstetricians and endocrinologists throughout the patient's pregnancy to ensure a positive outcome.[26] This conclusion is also supported by the research conducted in 2013 by Budenhofer, et al., as well as the 2013 study of Balucan, et al.[28][29] In March 2015, the Endocrine Society clearly stated that it does recommend screening in pregnant women who are considered high-risk for thyroid autoimmune disease.[30]

It is also recommended for undiagnosed women to be tested for thyroid peroxides antibodies if they have ever been pregnant (regardless of birth outcome). In their 2014 study, Carlé, et al. concluded, "…previous pregnancy plays a major role in development of autoimmune overt hypothyroidism in premenopausal women, and the number of previous pregnancies should be taken into account when evaluating the risk of hypothyroidism in a young women [sic]."[31] According to the research conducted by Carlé, et al., risk for thyroid dysfunction as well as for thyroid antibody production increases when at-risk or previously diagnosed mothers have more than one pregnancy.

Actress Gina Rodriguez, known for her lead role on The CW's Jane the Virgin, was diagnosed with the disease after falling ill while shooting the show's pilot episode. She had been diagnosed with hypothyroidism at the age of 19.[32]