From Infogalactic: the planetary knowledge core
Jump to: navigation, search
Not to be confused with Hatfield, Herefordshire.

Hatfield is a town and civil parish in Hertfordshire, England, in the borough of Welwyn Hatfield. It had a population of 29,616 in 2001,[1] and is of Saxon origin. Hatfield House, the home of the Marquess of Salisbury, is the nucleus of the old town. From the 1930s when de Havilland opened a factory until the 1990s when British Aerospace closed, Hatfield was associated with aircraft design and manufacture, which employed more people than any other industry. Hatfield was one of the post-war New Towns built around London and has much modernist architecture from the period. The University of Hertfordshire is based there. Hatfield is 20 miles (30 kilometres) north of London. A train service runs directly from Hatfield Station to Kings Cross, taking approximately 20 minutes on the fast service.

In the Saxon period Hatfield was known as Hetfelle, but by the year 970, when King Edgar gave 5,000 acres (20 km2) to the monastery of Ely, it had become known as Haethfeld. Hatfield is mentioned in the Domesday Book as the property of the Abbey of Ely, and unusually, the original census data which compilers of Domesday used still survives, giving us slightly more information than in the final Domesday record.[2] No other records remain until 1226, when Henry III granted the Bishops of Ely rights to an annual four-day fair and a weekly market. The town was then called Bishop's Hatfield. Hatfield House is the seat of the Cecil family, the Marquesses of Salisbury. Elizabeth Tudor was confined there for three years in what is now known as "The Old Palace" in Hatfield Park. Legend has it that it was here in 1558, while sitting under an oak tree in the Park, that she learned that she had become Queen following the death of her half-sister, Queen Mary I. She held her first Council in the Great Hall (The Old Palace) of Hatfield. In 1851, the route of the Great North Road (now the A1000) was altered to avoid cutting through the grounds of Hatfield House.

The town grew up around the gates of Hatfield House. Old Hatfield retains many historic buildings, notably the Old Palace, St Etheldreda's Church and Hatfield House. The Old Palace was built by the Bishop of Ely, Cardinal Morton, in 1497, during the reign of Henry VII, and the only surviving wing is still used today for Elizabethan-style banquets. St Etheldreda's Church was founded by the monks from Ely, and the first wooden church, built in 1285, was probably sited where the existing building stands overlooking the old town. 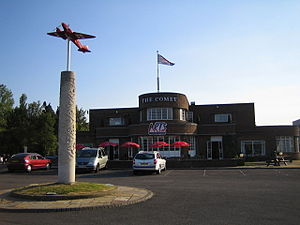 The Comet; the carving of the pillar is by Eric Kennington

In 1930 the de Havilland airfield and aircraft factory was opened at Hatfield and by 1949 it had become the largest employer in the town, with almost 4,000 staff.[3] It was taken over by Hawker Siddeley in 1960 and merged into British Aerospace in 1978.[4] In the 1930s it produced a range of small biplanes. During the Second World War it produced the Mosquito fighter bomber and developed the Vampire, the second British production jet aircraft after the Gloster Meteor. After the war, facilities were expanded and it developed the Comet airliner (the world's first production jet liner), the Trident airliner, and an early bizjet, the DH125.

British Aerospace closed the Hatfield site in 1993 having moved the BAe 146 production line to Woodford Aerodrome. The land was used as a film set for Steven Spielberg's movie Saving Private Ryan and most of the BBC/HBO television drama Band of Brothers. It was later developed for housing, higher education, commerce and retail. Part of the former British Aerospace site was intended to be the site of a £500 million new hospital to replace the Queen Elizabeth II Hospital in Welwyn GC and a new campus for Oaklands College, but both projects were cancelled.[citation needed]

Today, Hatfield's aviation history is remembered by the names of certain local streets and pubs (e.g. Comet Way, The Airfield, Dragon Road) as well as The Comet Hotel (now owned by Ramada) built in the 1930s. (The Harrier Pub (formerly The Hilltop) is actually named after the Harrier Bird, not the aircraft, hence the original pub sign of a Harrier Bird.) The de Havilland Aircraft Heritage Centre, at Salisbury Hall in nearby London Colney, preserves and displays many historic de Havilland aeroplanes and related archives. 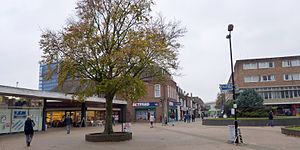 After the Second World War, Hatfield was designated a New Town under the New Towns Act 1946 (and the earlier Abercrombie Plan for London in 1944), forming part of the initial Hertfordshire group with nearby Stevenage, Welwyn Garden City and Letchworth. The Government designated 2,340 acres (9.5 km2) for Hatfield New Town, with a population target of 25,000.[3] (By 2001 the population had reached 27,833.[5]) The Hatfield Development Corporation, tasked with creating the New Town, chose to build a new town centre, rejecting Old Hatfield because it was on the wrong side of the railway, without space for expansion and "with its intimate village character, out of scale with the town it would have to serve."[3] They chose instead St Albans Road on the town's east-west bus route. A road pattern was planned that offered no temptation to through traffic to take short cuts through the town and which enabled local traffic to move rapidly about the town.[3]

Hatfield retains New Town characteristics, including much modernist architecture of the 1950s and the trees and open spaces that were outlined in the original design. The redevelopment of the town centre is being planned, involving the construction of 275 flats and retail units. Planning permission has been granted and compulsory purchase orders have been approved.[citation needed] 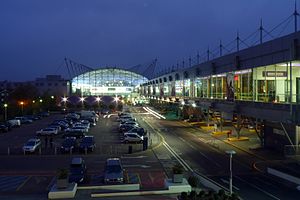 The south wing of The Galleria with the connecting bridge on the right of the photograph, viewed from its north wing. 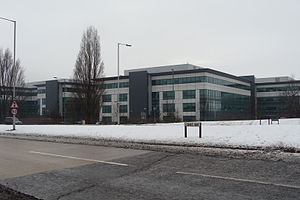 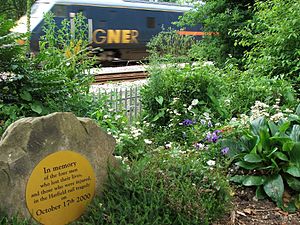 The memorial garden built alongside the East Coast Main Line. 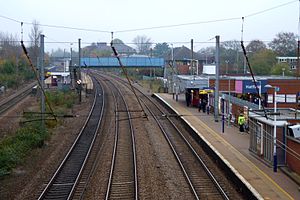 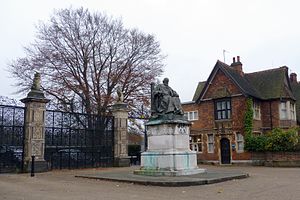 Statue of Robert Gascoyne-Cecil, 3rd Marquess of Salisbury in front of the park gates of Hatfield House.

Hatfield has a nine-screen Odeon cinema, a stately home (Hatfield House), a museum (Mill Green Museum), a contemporary art gallery (Art and Design Gallery), a theatre (The Weston Auditorium) and a music venue (The Forum Hertfordshire). There are shopping centres in the new town. The Galleria (indoor shopping centre), The Stable Yard (Hatfield House), and at two supermarkets (ASDA and Tesco).

The University of Hertfordshire is based in Hatfield. A large section of the airfield site was purchased by the University and the £120 million de Havilland Campus, incorporating a £15 million Sports Village, was opened in September 2003. The university has closed its sites at Watford and Hertford; faculties situated there have been moved to the de Havilland Campus.

Hatfield is 20 miles (32 km) to the north of London. It is 14 miles (23 km) from London Luton Airport and also near to Stansted airport The A1(M) runs through the town and it is close to the M25.

The East Coast railway line from London to York runs through the town and separates the old and new parts of Hatfield. A 22-minute commuter service connects Hatfield railway station to London Kings Cross.

There was a fatal rail crash at Hatfield in 2000, which brought track maintenance deficiencies to public attention.[7] A garden beside the East Coast Main Line was built as a memorial for the crash victims.

Nearby towns and villages