From Infogalactic: the planetary knowledge core
Jump to: navigation, search
Not to be confused with Hatfield Manor House. 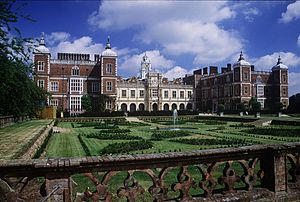 Hatfield House is a country house set in a large park, the Great Park, on the eastern side of the town of Hatfield, Hertfordshire, England. The present Jacobean house, a leading example of the prodigy house, was built in 1611 by Robert Cecil, First Earl of Salisbury and Chief Minister to King James I and has been the home of the Cecil family ever since. It is a prime example of Jacobean architecture. The estate includes extensive grounds and surviving parts of an earlier palace. The house, currently the home of Robert Gascoyne-Cecil, 7th Marquess of Salisbury, is open to the public. 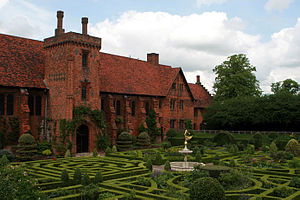 An earlier building on the site was the Royal Palace of Hatfield. Only part of this still exists, a short distance from the present house. That palace was the childhood home and favourite residence of Queen Elizabeth I. Built in 1497 by the Bishop of Ely, King Henry VII's minister John Cardinal Morton, it comprised four wings in a square surrounding a central courtyard. The palace was seized by Henry VIII with other church properties.

Henry VIII's children, King Edward VI and the future Queen Elizabeth I, spent their youth at Hatfield Palace. His eldest daughter, who later reigned as Queen Mary I, lived there between 1533 and 1536, when she was sent to wait on the then Princess Elizabeth, as punishment for refusing to recognise Henry's marriage to Anne Boleyn and his religious reforms. In 1548, when she was only 15 years old, Elizabeth was under suspicion of having illegally agreed to marry Thomas Seymour, the House and her servants were seized by Edward VI's agent Robert Tyrwhit, and she was interrogated there. She successfully defended her conduct with wit and defiance. Seymour was executed in 1549 for numerous other crimes against the crown. After her two months of imprisonment in the Tower of London by her sister Queen Mary, Elizabeth returned to Hatfield. The Queen Elizabeth Oak on the grounds of the estate is said to be the location where Elizabeth was told she was Queen following Mary's death, but is considered unlikely as Mary died in November. In November 1558, Elizabeth held her first Council of State in the Great Hall.

File:HatfieldHallJosephNashc1840.jpg
The great hall in 1840

Elizabeth's successor, King James I, did not like the palace much and so gave it to Elizabeth's (and his own) chief minister Robert Cecil, 1st Earl of Salisbury, in exchange for Theobalds which was the Cecils' family home on the current site of Cedars Park, Broxbourne. Cecil liked to build and so tore down three wings of the royal palace (the back and sides of the square) in 1608 and used the bricks to build the present structure.

Robert Arthur Talbot Gascoyne-Cecil, 3rd Marquess of Salisbury, was three times prime minister during the closing years of Queen Victoria's reign. The city of Salisbury (now Harare) in the colony of Rhodesia (now Zimbabwe) was founded in his time, and named for him. He is also known for often putting members of his family into the Government while Prime Minister. As his first name was Robert, this habit is sometimes said to have given rise to the popular expression 'Bob's your uncle' (meaning roughly 'It's all right, everything is sure to come off')

Hatfield House is a popular tourist attraction because it has so many objects associated with Queen Elizabeth I, including some gloves and a pair of silk stockings that are believed to have been the first ones in England. The library displays a 22 feet (6.7 m) long illuminated parchment roll showing the pedigree of the Queen with ancestors back to Adam and Eve. The Marble Hall holds the "Rainbow Portrait" of Elizabeth.

The State Rooms house many important paintings, furniture, tapestries and armour. The richly carved wooden Grand Staircase and the rare stained glass window in the private chapel are among the house's original Jacobean features.

The Gardens, covering 42 acres (170,000 m²), date from the early 17th century, and were laid out by John Tradescant the elder. Tradescant visited Europe and brought back trees and plants that had never previously been grown in England. The gardens included orchards, fountains, scented plants, water parterres, terraces, herb gardens and a foot maze. They were neglected in the 18th century, but restoration began in Victorian times and continues under the present Dowager Marchioness of Salisbury.

During World War I, the grounds were used to test the first British tanks. An area was dug with trenches and craters and covered with barbed-wire to represent no man's land and German trench lines on the Western Front. To commemorate this, the only surviving Mark I tank was sited at Hatfield from 1919 until 1970 before being moved to The Tank Museum, Bovington.[1]

The Rhodesian Light Infantry Regimental Association has placed its 'Troopie' memorial statue on the grounds of Hatfield House, due to the long association of the Cecil family with Southern Rhodesia . Around its base is a roll of regimental members ('troopies') who fell in the Rhodesian Bush War and several inscriptions, including 'In reconciliation and hope for future peace in Zimbabwe'.[2]

The State Rooms can be seen in the midweek guided tours, and visitors can look around in their own time at weekends. On Friday, the Garden Connoisseur's Day, the House is open for guided tours and for pre-booked specialist groups. There is also five miles of marked trails.

Other films include Cromwell with Alec Guinness, west side of the house, Henry VIII and His Six Wives with Keith Michell, Charlotte Rampling & Lynne Frederick, the Old Palace and park, The Avengers with Sean Connery overlooking the maze,[3] Charlie and the Chocolate Factory starring Johnny Depp,[3] V for Vendetta with Stephen Fry [3] and [3] Mortdecai in 2015 starring Johnny Depp and Gwyneth Paltrow.