From Infogalactic: the planetary knowledge core
(Redirected from Haute-Normandie)
Jump to: navigation, search

It was created in 1956 from two departments: Seine-Maritime and Eure, when Normandy was divided into Lower Normandy and Upper Normandy. This division continues to provoke controversy, and many people continue to call for the two regions to be reunited. However, the name Upper Normandy existed prior to 1956 and referred by tradition to territories currently included within the administrative region: the Pays de Caux, the Pays de Bray (not that of Picardy), the Roumois, the Campagne of Le Neubourg, the Plaine de Saint-André and the Norman Vexin. Today, most of the Pays d'Auge, as well as a small portion of the Pays d'Ouche, are located in Lower Normandy. Rouen and Le Havre are important urban centers. 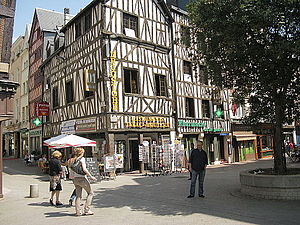 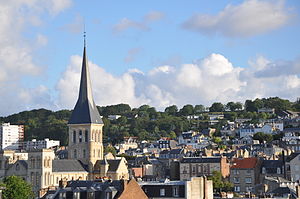 The Saint-Vincent neighborhood in Le Havre 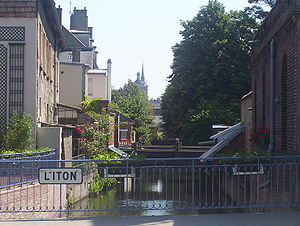 Rouen is the regional capital, historically important with many fine churches and buildings, including the tallest cathedral tower in France. The region's largest city, in terms of municipal population, is Le Havre, although Rouen is by far the most populous urban area and metropolitan area. The region is twinned with the London Borough of Redbridge in England. Its economy is centered on agriculture, industry, petrochemicals and tourism.